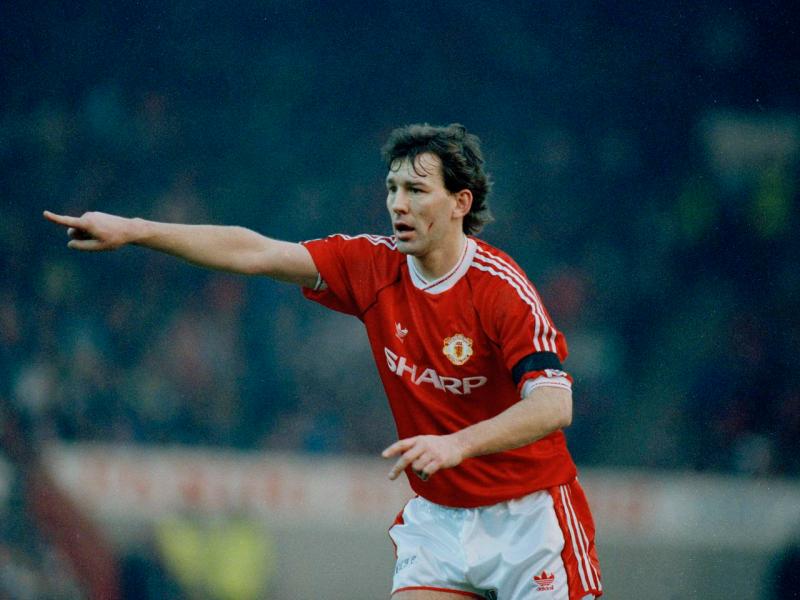 Manchester United legend Bryan Robson will be in Derry on May 1st.

Former Manchester United captain Bryan Robson will be the special guest at this year’s Annual Fundraising Dinner for the Ryan McBride Foundation on May 1.

‘Robbo’, who made almost 350 appearances for United between 1981 and 1994, was one of the finest players of his generation and was the first captain to life the Premier League trophy, doing so twice in 1993 and 1994. He also won 3 FA Cups, one League Cup and the European Cup Winners’ Cup.

Robson also played 90 times for England and played in three World Cups before going on to manage Middlesborough, Bradford, West Brom and Sheffield United. His presence will certainly entice local United fans, and the Foundation are certainly hoping to see local reds there in their numbers in just a few weeks’ time.

“We last did this event in 2019 when it was an annual event,” he explained.

In 2020 Covid kicked in and the next two years essentially were cancelled. This function more or less funds us for the year for a lot of the projects that aren’t funded by government, so it’s important to get that unrestricted income and it would be good to see a good crowd there and get back to normality.

"Hopefully that will be a part of the attraction as well, maybe for businesses who haven’t been able to have a night out with their staff or customers, but they can do it now.”

Known also as ‘Captain Marvel’, Robson’s finest moment arguably came in the second leg of the Cup Winners’ Cup tie against Barcelona in 1984. United trailed 2-0 to Barca from the first leg, but on a night never to be forgotten, Robson scored two goals on the way to a 3-2 aggregate victory over a team featuring Diego Maradona.

Throwback Thursday: Out & About Derry at Downey's Bar (2008)

“If you look back on his career and what he achieved, some of the goals he scored and the battles that he and Graeme Souness had in the middle of the park, were unbelievable,” McCay continued.

“If you look at some of the tackles he put in it would actually remind you of Ryan. Ryan was a massive Manchester United fan. If they were beat, you couldn’t look at him. He was a big Roy Keane man and a big David Beckham fan, so to get the captain of Man. United for so many years over her is brilliant. If Ryan was here, it would be something he would have been keen to go to so it fits in. It’s from one great captain to another. When you think about great captains from the Premier League, Bryan Robson is never far away and when you think about great captains from the League of Ireland Ryan McBride is never far from your lips either.”

Also in attendance will be former Derry City manager and current Republic of Ireland manager Stephen Kenny, who has been a patron of the charity for two years now. Kenny was the first to take a chance on the former Brandywell defender.

“Stephen has been very good to us,” McCay agreed. “One thing about Stephen is if you ring him and he doesn’t answer you’ll always get a ring back in a day or two, and you don’t get that with a lot of people. He’s always been very good with his time. There’s probably not many managers in the League of Ireland who would have taken a chance on Ryan and Stephen was humble enough to say ‘I’m not going to rule out a player just because he plays in the local D&D League’. Ryan McBride definitely wouldn’t have done anything to the extent he did without Stephen putting his faith in him.”

Derry City fans paid tribute to their former captain during last week’s game against St. Patrick’s Athletic, lighting up the ground on the fifth anniversary of his passing. The tribute, McCay explains, meat a lot to the family.

“We did see the videos and a lot of the tributes that were paid to him over the weekend,” he said. “I don’t think people realise the effect that stuff like that has on Ryan’s family. It’s only proper that people move on and clubs move on, but to see the efforts that people went to; I know Karen Pyne organised the tribute at the Brandywell with the St. pats’ fans getting involved as well. It does mean a lot to the family. It just shows that Ryan has not been forgotten. His family are similar to Ryan in that they are very quiet but it does mean a lot.”

Tables of 10 are now available for the event at the Everglades Hotel on May 1, priced at £650. Sponsorship opportunities are also available. Anyone interested in attending or supporting the event is asked to contact the Ryan McBride Foundation Facebook page.