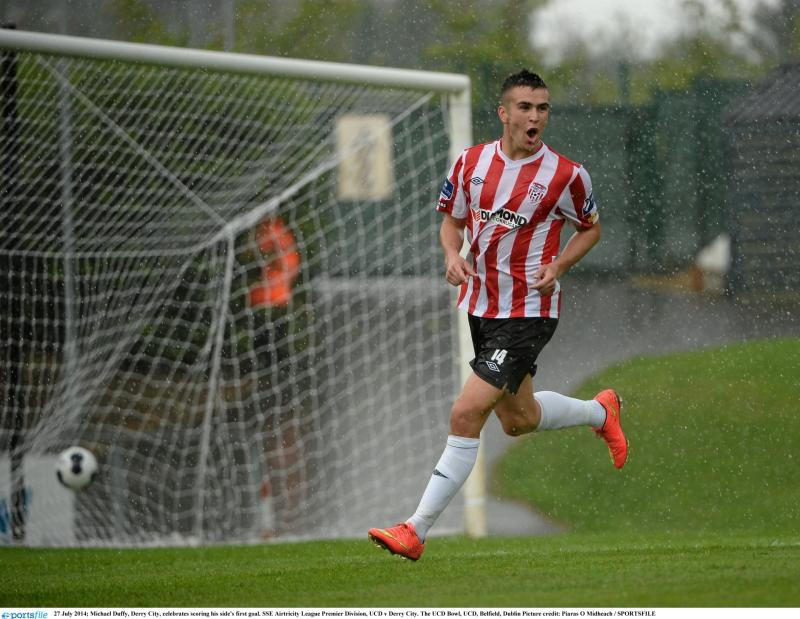 Derry City boss, Ruaidhri Higgins, is backing Michael Duffy to bounce back from his latest injury setback and insists the club will not pressure him into a quick return.

Duffy left the Brandywell after last week's 2-0 win against Drogheda after being carried off following his appearance as a substitute 10 minutes earlier.

It was a sad sight given the excitement that had been generated by Duffy's return to the club – not to mention that the club will have to do without his talents over the next few weeks.

Higgins said: “It's obviously disappointing news for Michael and the club. But we won't put pressure on him regarding the timeframe (of when he comes back).

“However, he will still have a huge role to play in the season. It's not an end-of-season-type injury and he will have a big impact to make.

“He's not one who has had a history of injuries. I worked with him at Dundalk and he was always available for matches.

“So it's something new to him and it's a big setback for him and us. But he'll be fine – he's a fit lad and when he returns, I'm sure our crowd will get to, for me on his day, the best player in Ireland.”

Despite Duffy's injury, Derry's win against Drogheda – thanks to Jamie McGonagle's double – continued their fine start to the season – a beginning that hasn't surprised Higgins, although he is playing down talk of a potential title challenge at this very early stage.

He added: “I wouldn't say I'm surprised at the start we've made to the season. We've got a good points return and it's a fair reflection on how it's gone so far.

“I think we could have scored a couple more goals but we've won quite comfortably and kept a clean-sheet so we're delighted with last Friday's result.

“Given the fixtures that we've had, I think it's a good points return.

“The players have been absolutely brilliant – even the lads like Nathan Gartside and Jack Malone who have been regulars but haven't seen much game-time. Their attitudes have been outstanding.

“It's so important for the group that you've got really good professionals around. There's been other players who have been in and out of the team who have been extremely professional and driving each other on. That's all we can ask for.

“It's way too early to talk of 'title challenges' as we don't look past the next game.

“If we are in the same position in 25 games time, then there might be a different conversation to be had. However, it's too dangerous to look too far ahead so we won't be getting carried away at all.”

St Patrick's Athletic roll into town on Friday night and Higgins hopes a raucous Brandywell crowd will inspire his troops to victory – one that could see them top of the table if they win and Sligo slip up at Shamrock Rovers.

He continued: “I think Friday nights shows the ground to have more atmosphere than a Monday.

“We'll be hoping that this Friday night, our crowd will get right behind the team – obviously we're down a few bodies with a few niggles and injuries so we will need their help to drive us on and hopefully they can bring that same level of noise they brought to the Brandywell when we beat Shamrock Rovers.

“I do believe that Friday brings a louder atmosphere because people have finished their work for the week and see the Derry match as the start of their weekend.

“They come along and maybe have a few beers – whereas they probably wouldn't on a Monday with work the next day.

“But Friday night at the Brandywell is definitely a better all-round experience but we need that to continue as it helps the players. That crowd noise does give them the extra energy – especially during difficult moments.”