North West Warriors player Craig Young has described hitting the winning runs in Ireland's historic series win over the West Indies in Kingston as a 'sweet and proud moment.'

The two wicket win over the West Indies is Ireland's first ever away series victory against a full member side.

The right-handed batsman and pace bowler claimed three wickets in each of the three games including the scalp of crack batsman Shai Hope in the decider played last week.

​Craig is a member of Derry City and Strabane District Council's Athlete Support Membership that allows athletes competing at the top of their sport to train for free in its leisure centres.

"It's nice to have contributed to a fairly historic moment in Irish cricket and hopefully the first of many series wins," he said.

"To take three wickets in each game was great but I have to admit hitting the winning runs was a very sweet and proud moment and not something I get the chance to do very often."

Craig's North West Warriors team mate, Andy McBrine, from Donemana, notched up a 59 run tally in the final game to claim the Player of the Series award.

"Andy was phenomenal throughout the three games," Craig added. "He's actually been phenomenal for a while now.

"He very very rarely bowls a bad ball and has the best control of any bowler I know – it's remarkable.

"When he bats it either has to be a very good ball or a bit of luck for the bowler to get him out.

"He values his wicket as if his life depends on it and that's great for our younger batters to watch and learn from."

Craig made his first class debut for Ireland in a One Day International against Scotland eight years ago having spent three years at Sussex from 2010 to 2013 and has spent the last eight years at North West Warriors.

"I'm a senior player now, which still feels odd but I love being a part of the international side and hope there are many more years to come.

"Making my One Day International debut was one of my proudest moments but getting my first ever cap was my career highlight.

"I was a bag of nerves until I got that first wicket which thankfully came pretty early on.

"It was a four day first class game and I have to say it was a fantastic and enjoyable week.

"Beating England last summer is also a highlight and being involved in the test match at Lords was surreal too.

"A test cap would be a dream come true, the moment I first picked up a cricket ball I'd never have believed you if you told me then you could play test cricket for Ireland, that's definitely something I want and something I'd like to tick off sooner rather than later."

Craig's local club Bready cemented their reputation as an international cricket venue by successfully hosting a T20 international series against Zimbabwe in the summer with support from Derry City and Strabane District Council's International Events Fund.

"I think looking at last summer there was a buzz around the fixtures and that was great to see and be around for," he said.

"I grew up playing my cricket at Bready and knew of the passion they had for their vision of the club.

"They knew what they wanted and worked their socks off to push it through and it is of no surprise it's a top class facility and hopefully they keep getting fixtures and we keep getting international cricket in the North West and we will continue to produce the Andy McBrines and the Boyd Rankins.

"Bready is a key part in growing the game in this part of the world and they do more than their fair share of work so hopefully they keep getting their rewards."

The aim of the Athlete Support Programme is to provide talented athletes with the best possible opportunities to develop and prepare for competition.

Athletes must be part of a recognised governing body talent pathway of be officially representing their sport at county level or higher.

"The Programme has been a massive help," he admitted. "To have access to those state of the art facilities in there has been great.

"To be able to come and go and use them for gym, recovery or rehab has helped push me on. 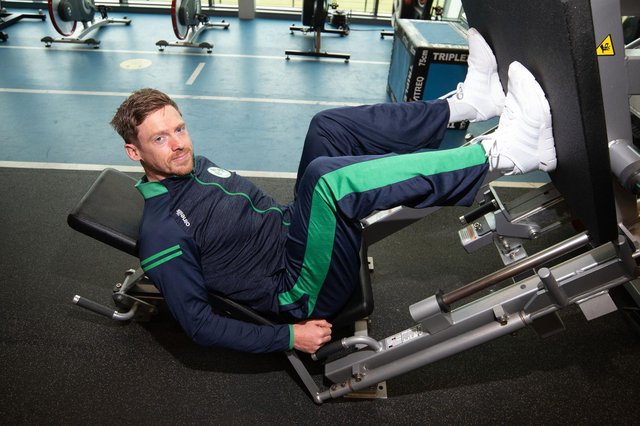 "I feel that help like this is key to athletes moving forward and I've certainly benefited as have other cricketers and athletes through the programme and long may that continue."

"The aim of the scheme is to provide talented athletes like Craig with the best possible opportunities to develop and prepare for competition," he said.

"Athletes must be currently part of a recognised governing body talent pathway or be officially representing their sport at county level or higher.

"Applications are welcome from all individuals; arrangements can also be made for any athletes with special training needs.
"Those who fulfil the criteria will be entitled to six months free access to gym, health suite, swimming pool and cryospa," he added.