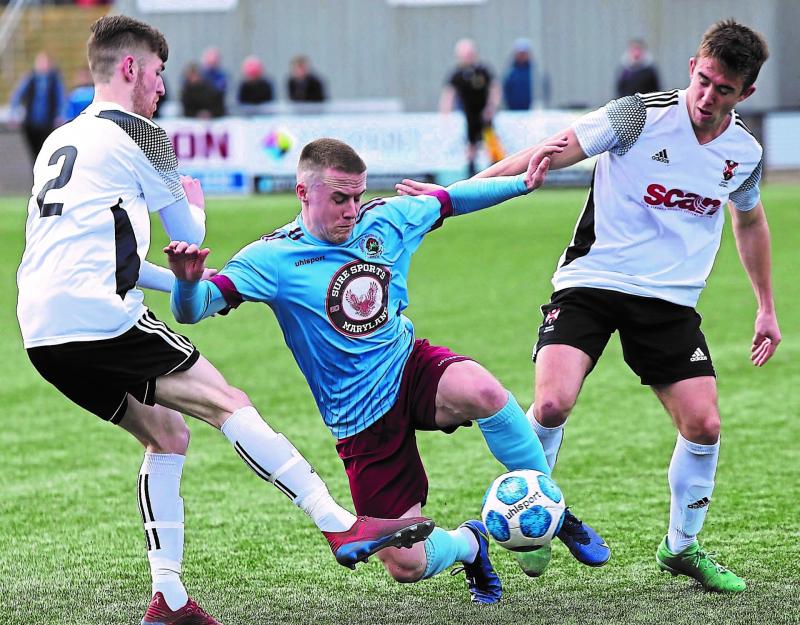 Stute's Benny McLaughlin in a tight squeeze as he tries to take control of the ball. Photo: Tom Heaney (nwpresspics)

Institute slumped to another home defeat when they lost to bottom side Queen's University at the Ryan McBride Brandywell Stadium on Saturday.

The loss sees the Derry side five points above Queen's at the bottom of the Championship table with a game more played.
However, the light blues have only themselves to blame for the defeat as they created enough chances to take maximum points.

'Stute went into the game with only one win in the previous seven outings, and it was clear from early on that three points would be hard to come by.

The visitors came close to scoring in the 15th when a goal-bound effort by McGuinness was blocked by Aidan McCauley.
Goalkeeper Gareth Muldoon came to the rescue of the home side shortly afterwards when he prevented Ronan Young finding the back of the net.

Queen's keeper Conan Doherty easily dealt with a 20-yard Cormac Burke free-kick before Mark McFadden headed over six yards out when it looked easier to score.

Doherty denied Ian Parkhill in the 78th minute ahead of the visitors scoring what would prove to be the winner five minutes later when substitute Ciaran O'Hare turned a McGuinness cross past Muldoon.

'Stute thought they had equalised a short time later but McLaughlin's 'goal' was ruled out for offside by the assistant referee.
The pressure on manager Brian Donaghey was highlighted when he was shown a red card by referee Declan Hasson for his over-zealous protest at the decision.

Things don't get any easier for 'Stute as they travel to take on title-chasing Annagh next Saturday, the Portadown having recorded a 2-0 in the corresponding tie earlier in the season.