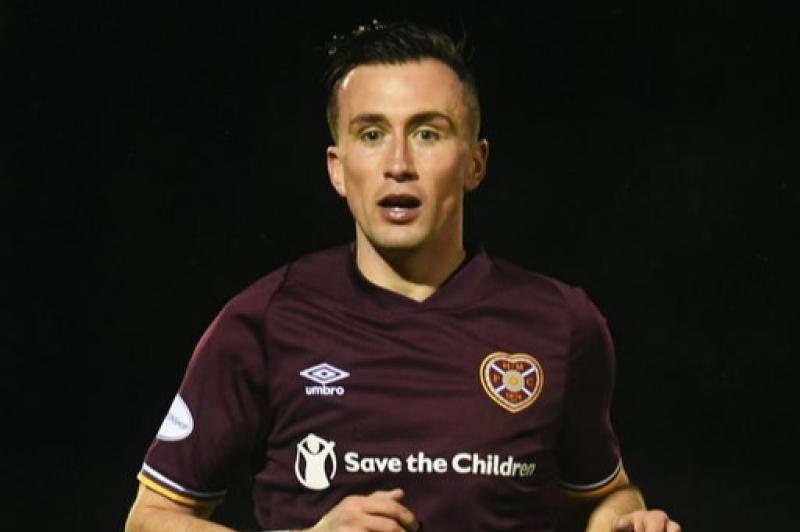 Former Derry City midfilder Aaron McEneff grabbed a goal and an assist to send Hearts into the Scottish Cup semi-finals with a 4-2 win against St Mirren.

McEneff put the hosts back in front within seconds of coming off the bench after St Mirren battled back from two goals down. He then sent up Ellis Simms for the fourth.

Hearts stormed to a two-goal lead through Beni Baningime and Peter Haring before Eamonn Brophy halved Saints’ deficit before the break.

Saints forward Connor Ronan then scored a wonder goal from distance before Hearts finished strongly to book a return to Hampden.

Hearts were without six first-team players after five – including John Souttar – were forced off injured in last weekend’s draw with Dundee United.

There was more concern within the opening minutes of this game after defender Craig Halkett needed his head to be bandaged up following a head knock with Brophy.

Both goalkeepers were called into action early on, with Scotland number one Craig Gordon saving from Brophy before Jak Alnwick repelled a stinging Barrie McKay drive.

Hearts then opened the scoring in the 16th minute through Baningime. Simms tussled with goalkeeper Alnwick in the six-yard box from McKay’s cross and the ball fell kindly for Baningime, who toe-poked home from close range.

The second arrived on the half-hour mark following a sweeping move that culminated in Haring finding the net.

Liam Boyce sprayed the ball wide to Ben Woodburn and the on-loan Liverpool forward’s first-time pass was swept in by Haring from 10 yards.

St Mirren pulled one back six minutes later when Richard Tait’s cross was brilliantly volleyed into the top corner by Brophy from inside the six-yard box.

There was no drop in the level of entertainment after the break. Saints keeper Alnwick was called on to keep out Nathaniel Atkinson and Woodburn efforts before Gordon pushed away a Greg Kiltie header.

Saints then levelled in the 62nd minute with a wonder striker from Ronan.

The Irishman, who moved to the Scottish Premier League side earlier this year from Shamrock Rovers, picked up Boyce’s poor clearance from a corner and arrowed an unstoppable drive into the top corner from 30 yards.

Hearts keeper Gordon did not even move for the ball.

Saints had their tails up but it was Hearts who struck next in the 67th minute.

Atkinson got past Jordan Jones on the byline and after his low cross was cut out at the front post McEneff, within seconds of coming on, lashed a reactionary shot into the net from close range.

Hearts kept up the pressure and Simms added a fourth to finally douse St Mirren’s hopes in the 85th minute with a neat finish at the front post from former Candystripe McEneff’s cross.