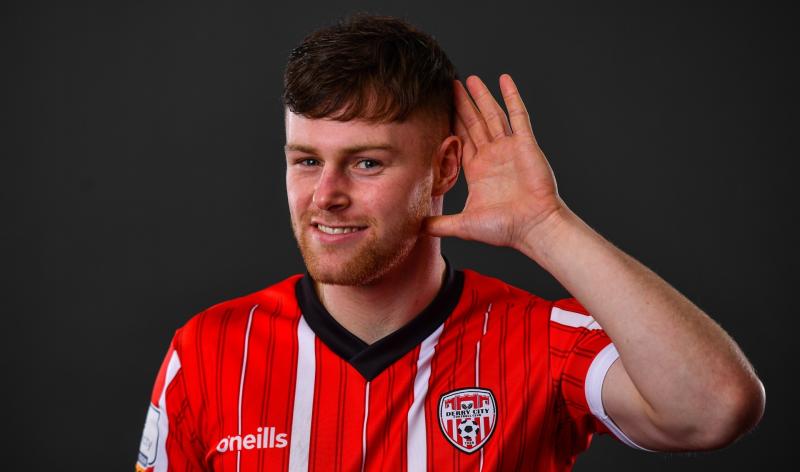 EVER-PRESENT… Cameron McJannet has formed a regular partnership with Eoin Toal at the heart of the Derry City defence. Photo: Sam Barnes (Sportsfile)

Cameron McJannet will reach a half century of games for Derry City if he features against UCD tomorrow night.

The 23-year-old has been a regular since making his debut at Drogheda United in August 2020, having been signed by Declan Devine from Stoke City. On the hunt for consistent first team football, McJannet has found a second home in Derry, and has missed just a handful of games since Ruaidhri Higgins took charge last April, scoring five goals in the process.

McJannet has seen a lot of changes at the Brandywell in the last 12 months, with the Candystripes sitting bottom of the Premier Division having lost their first four games in 2021. This time around, Derry City sit top of the league with eight points.

“It’s a nice change, but just four games in we can’t get carried away because we have seen how things change,” he said. “Last year we were bottom after four games and finished fourth and had a great run.

“If you had said before we would have eight points from four games we probably would have taken it. We are here now but there’s vibe around the training ground that there’s absolutely nothing done. We just want to go on and keep getting as many points as possible. If we can get eight points from every four games that would be fantastic. We just want to keep it going.”

City’s fine start to the season continued at Shelbourne last Friday, with the 1-0 win at Tolka Park meaning that overall the team are now unbeaten in 9 league games. With Shamrock Rovers and Dundalk both dropping points, the importance of the victory in Dublin cannot be underestimated.

“I felt we have dealt with the hand we’ve been given with Dundalk and Shamrock Rovers early on. You can say it’s nice to get them out of the way early but I feel we’ve done well. Sometimes you would rather play the best teams first and we have done well with that.”

Other than the three points, every defender wants a clean sheet and having only kept 9 in 36 games last year, McJannet is content with two in two in the space of five days.

“I feel like the clean sheets maybe come from controlling the game which means less chances or the opposition,” he stated.

“Even in big games when we wouldn’t have as much control maybe we still want to keep clean sheets. Clean sheets add up and hopefully we have a good few more after the next few months. Last year was a bit slow but hopefully they’ll tot up gradually this year.

Derry City will be significant favourites travelling to UCD tomorrow evening. Bottom of the table with just two points from four games, the Students haven’t beaten the Candystripes since October 2014. But despite the contrasting fortunes of the sides, McJannet knows that three points cannot be taken for granted.

“It’s great that the fans have that expectation, but it’s outside noise and we have to keep focused on what we’re doing and try our very best to meet those expectations and keep fans as happy as possible,” he continued.

“Any team can beat the other at any time. We just treat every game as if it’s the biggest game of the season and that’s exactly what we’ll do on Friday night. We’ll give UCD every bit of respect we should and we’ll go down there and try and win a game.”

Having started every game so far, McJannet will very likely feature tomorrow, bringing him up to number 50 for Derry City.

“It’s great to be playing competitive games, it means so much,” he said. “I’ve loved every minute of it. The great thing about this season is that the squad has been strengthened so much, but everyone in the squad has to keep on their toes, no matter how well we are doing.”