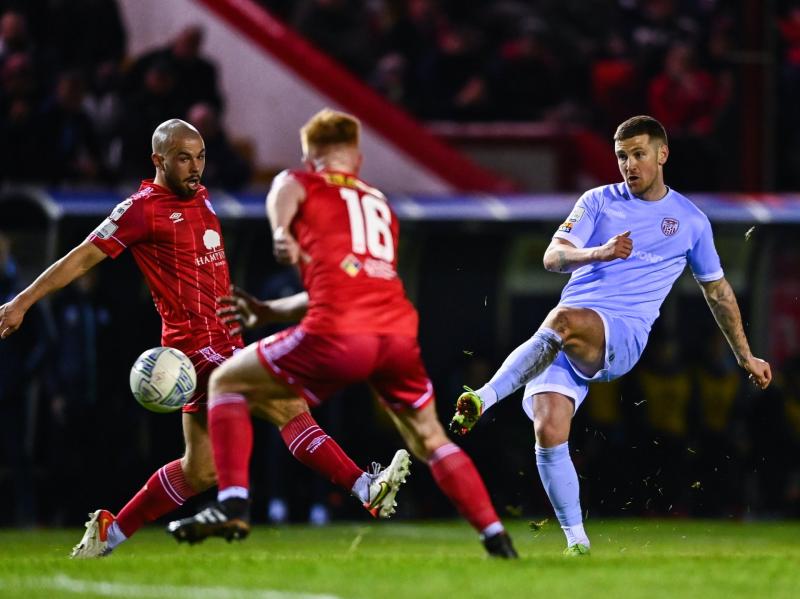 BACK AMONGST THE GOALS... Patrick McEleney was the Derry City match winner at Tolka Park. Photo: Eoin Noonan (Sportsfile)

Patrick McEleney has cautioned that Derry City's good start to the season is nothing to get carried away about, even if the best is yet to come.

The Candystripes sit top of the Premier Division after just four games of the season, with the 1-0 win over Shelbourne at Tolka Park coupled with Shamrock Rovers' defeat to St. Patrick's Athletic getting the fans excited about the possibilities in 2022.

But McEleney knows it is a long road ahead.

“It's just a start,” he said. “Once we get into the middle of the season and we have our bodies back and everybody is fully at it I think we'll be a match for everybody, I think we have proven that already but it's just a start, that's all it is.

“It's a competitive league. I've been in teams that have won leagues and didn't have the best of starts. I think at Dundalk we were 13 points behind at one stage and came back to win it by 13 points so it means absolutely nothing. For me you just have to take care of your own business and tick the games off.”

McEleney has yet to complete 90 minutes this season, but has featured in all four league games. City boss Ruaidhri Higgins has admitted that he is taking it slowly with the midfielder, who chipped in with his first City goal in six years just before being substituted at Tolka Park.

“My lungs are perfect, but it's just wee niggles and stuff which is frustrating,” he admitted. “I'll get there. As long as I can contribute at the minute and keep ticking off games that's the main thing. “It's nice to get off the mark. It was the right place at the right time.

"I just spun off the play where the ball was going and it fell to me. Every manager I played with was always on my back about scoring tap ins so that should keep them quiet. I'm happy to contribute and get the goal.

Friday night's game was not one which will be remembered, with McEleney's goal the only memorable moment in the 90 minutes. Despite chances being at a premium for both sides, McEleney emphasised the importance of collecting the three points.

“I felt we were in control,” he continued. “We never really seemed in trouble which is a good thing, but in the final third it will come, those wee sharp movements and getting around the box, and a bit of belief, it'll come, but we're ticking off points and that's the main thing.

“Right up to the final third we played really well. Probably for the fans looking in we didn't have many chances and they didn't see us winning it, but the belief was always there from my side and I'm sure it was there for the other boys as well. Grinding out wins is important, especially if you're looking to be successful.”

After an extremely challenging start to the season against three of the top teams in the Premier Division, the Candystripes face a run of games in which they will be expected to take maximum points.

Following the win over newly-promoted Shelbourne, they next travel to UCD on Friday before hosting Drogheda United next Monday. With the players still getting to know each other, McEleney believes there is plenty of opportunity in the forthcoming games.

“You could look at it like that,” he admitted. “There are a bunch of games where you can try and get points. I think we can only get better which is a good thing.

“Every game in this league is hard, I say it all the time. Up until the final third we were in total control, but we're a new team as well; there's me, Jamie and Brando as a front three and we've never really played with each other so you have to take that into consideration as well.”