Luck finally went Institute's way as they secured their first league win in five games at the expense of promotion hopefuls Ballinamallard United at the Brandywell on Saturday.

Brian Donaghey's men have suffered some woeful luck this season, but they finally enjoyed their own bit of good fortune when they were gifted a bizarre second goal which proved to be worth all three points to close the gap on Knockbreda in 10th place to just two points with nine games of a difficult season remaining.

Trailing to BJ Banda's early strike, Brian Donaghey's men levelled things thanks to Brendan McLaughlin's neat finish and claimed all three points in somewhat fortunate circumstances as the unfortunate Richard Clarke turned the ball into his own net.

While performances have improved of late, results have continued to elude Donaghey and his players, and they went into this game as underdogs.

'Stute certainly started well and just four minutes in they created a good chance when Mark McFadden played a neat one two with Brendan McLaughlin, before the young midfielder's powerful strike from 25 yards was well gathered by a diving United goalkeeper Rory Brown.

But it was Ballinamallard who took the lead on 16 minutes, as former Finn Harps striker BJ Banda raced clear of the home side's defence before skipping around goalkeeper John Connolly and coolly slotted the ball home into the net, despite Conor Quigley's best attempts on the line.

The home side responded well and went close to levelling things soon after as Quigley's left wing free-kick found centre-back Shaun Leppard at the back post, but the unmarked defender headed wide from close range.

Just after the half-hour mark a clever pass by Aaron Arkinson released Sean McEvoy down the left and the United winger cut inside past Jay Riley, before seeing his powerful strike flash over the bar. 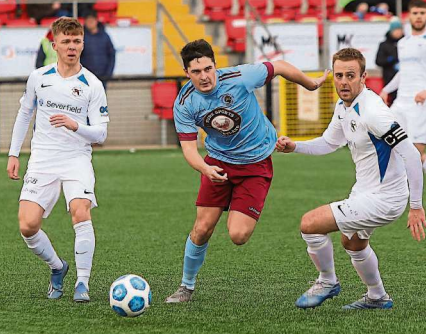 Stute's Liam Walsh made a return from injury.

'Stute stuck in there and deservedly levelled things on 39 minutes when good play by the returning Liam Walsh saw him get away from a few challenges before teeing up McLaughlin just inside the box and the striker made no mistake, firing home left footed for his 13th goal of the season.

Buoyed by that, 'Stute grew in confidence and took the lead on 58 minutes when a neat passing move ended with McLaughlin feeding Riley down the right and the young full-back's cross into six yard was turned into his own net by the unfortunate Clarke.

Ballinamallard huffed and puffed and eventually had a good chance to equalise on 73 minutes as Clarke's free-kick picked out Joshua McIlwaine, but the striker failed to hit the target from close range and headed wide.

'Stute continued to attack and went close to adding a third moments later as McLaughlin picked up possession from Clarke, before finding Ian Parkhill, but the on-loan Coleraine striker saw his left footed strike sail just over Brown's crossbar.

In the closing stages Reece Byrne missed a golden chance to equalise when Mark Stafford came out from the back before his pass found the young striker free inside the box, but his shot on the turn from 10 yards, whistled just past Connolly's left hand post.