Derry on a high as they head to Clare 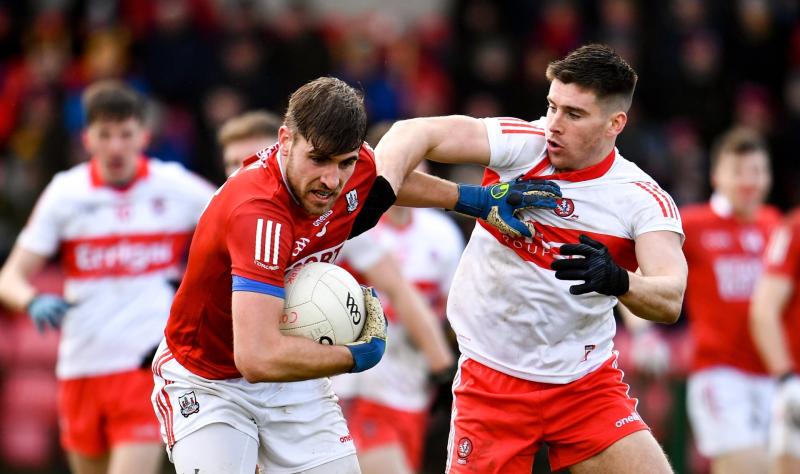 A win in Clare this weekend could see Derry pushing for promotion this season. Photo: Sam Barnes (Sportsfile)

After a very promising start to the season, Derry now face into the mouth of a key stretch in their league campaign, a period that will define whether this is a year of securing a spot in the division or pushing for promotion.

After wins over Down and Offaly, Derry comfortably defeated Cork at Owenbeg on Sunday past.

Eight points from Shane McGuigan and a second half goal from Benny Heron helped Gallagher’s team to a victory that always looked in their grasp – albeit Rory Gallagher will be expecting them to take more scoring chances as the league progresses.

"It was very comfortable in the end in very heavy conditions, but I thought even in the first half we missed a number of goal chances and maybe over played it a bit,” he said. “I think we should have been more than two up at half-time against a very strong breeze and in difficult conditions but look, happy with our start and looking forward to going to Clare.

“It would be nice to be coming up that road with eight points and guaranteeing your safety so you could really focus on trying to go to Division One then.

Gallagher continued: “Cork was a big milestone in our heads to be honest. The last game before Covid hit this country and hit the world we got a two-point annihilation down there. We got a few goals, but it was a shambolic set-up at the time and I don't think we have lost a league game since. We've lost a couple of championship games but we've turned a corner since.

“We're delighted with the commitment of our players, the loyalty to each other and the direction we are going.”

Despite McKinless and McFaul both being out of action against Cork due to injury, Derry certainly didn’t have a look of a team depleted, and Gallagher agreed that having competition for places and a bit of strength in depth about his squad was of massive importance.

"You can see it developing and that's down to the boys in training with their commitment to each other. None of them are huffing. Shea (Downey) had a great game against Offaly and played all the McKenna Cup, but Chrissy (McKaigue) came back in and he had to settle for a place on the bench.

“I'm sure he's not happy in his own head but he puts the team first and we very much appreciate all that from everybody,” he insisted.

"We are giving Lachlan (Murray) game-time and Odhran (Lynch) is really developing as a goalkeeper.  We'll very much welcome Gareth and Ciaran back, Paudie Tad is another one who is just easing his way back in with very limited training.

"It's no more than the likes of Armagh, Monaghan who can be missing players; Tyrone and Donegal - the top teams in this province. We want to be like that, and you just cannot do that with 13, 14 or 15 players.”

The performances of young players like Conor McCluskey and Ethan Doherty is another thing that has been a driving force behind Derry’s early success this season, and Gallagher said it is about gaining experience.

"Obviously with Brendan (Rogers) and Chrissy and their reputations I would have known them coming in but since working with them they have been better than I ever thought. Since we came in we've played Conor Doherty and Paudie McGrogan nearly every day. We're playing 'Clucky' (McCluskey) now that he's fit all the time and Odhran Lynch is the same.

"We were establishing a new group of defenders and Ethan Doherty is another one playing in the defence today. The sooner they get to 20, 25 appearances, the more mature they'll get and the more experience you have. We've stuck through a couple of bad days with them, and they have rewarded us.”

Derry now head to Clare this Sunday hoping to continue their recent success with Gallagher admitting that confidence is high ahead of the trip south.

"It's a good position to be in,” he agreed. “When you come up out of a division you want to make sure you get enough points to make sure you stay in the new division and while I would say six guarantees you that, with our score difference and one thing and another we are not in a bad position and we can look forward to Clare,” he explained.

"Clare are a team that apart from those yo-yo teams, have been the next best team over the past five, six seven years so we will have to focus on getting a really good performance.

"Hopefully we should have Gareth McKinless and Ciaran McFaul for the trip to Clare so that should help us.”

From the manager’s point of view all Derry can do is keep focusing on each game as it comes and adding more points to the board to build momentum.

"I think momentum is massive. Even our first two McKenna Cup games, we weren't too concerned about the Donegal game, but you want a bit of momentum because it generates interest, it generates confidence among the group, and it shows people they are doing the right thing.”

He continued: “You get momentum because you are doing the right thing and that is very important. It can be difficult because you are getting players back training and playing that you know you probably shouldn't.

“The problem is we don't have the squad to get that momentum without them, so I very much appreciate what everybody has done. We have the momentum now but we have to capitalise on it.

"It is week by week because every point has to be scrapped for. We have to take each game on its own merits and work really, really hard. If we continue to do that we will win an awful lot of games.”