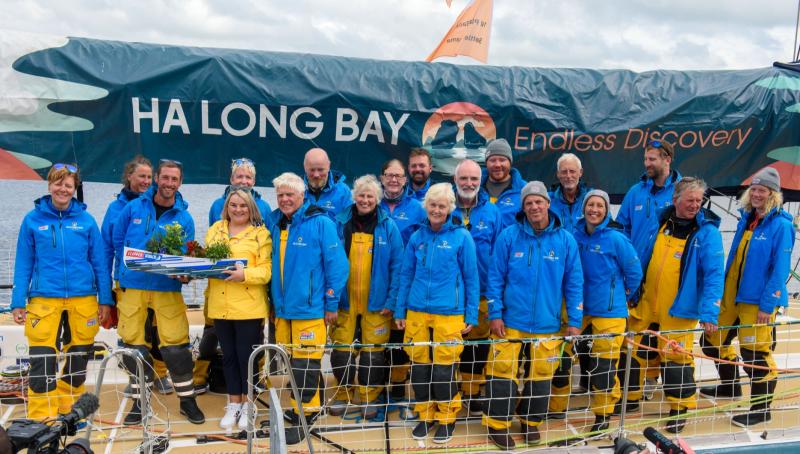 The Clipper Race crews, including nine non-professional sailors from Ireland, are safely tied up on Clipper Quay in Derry following the final ocean crossing of their epic 40,000 nautical mile (nm) Clipper Round the World Yacht Race.

The crew are part of the eleven teams, including people from all walks of life, who took on the big conditions of the North Atlantic, facing strong winds, big surf and fast downwind sailing.

The race started in London way back in September 2019 but faced a two-year pause at its halfway point due to the global pandemic.

This year marks the tenth year of partnership between the Clipper Race and the city of Derry, and the fifth time that the fleet are the centrepiece of the Foyle Maritime Festival, bringing crew, supporters and visitors to the city for the stopover.

The eleven multi-nation Clipper Race Crews, led by professional Skippers and First Mates, are made up of men and women from diverse walks of life, ranging from 18-70+ years old.

Civil Servants from Oxfordshire race shoulder to shoulder with Gap Year students from the Netherlands, Farmers from Devon, and Teachers from New Zealand.

Some 40% of Race Crew had no previous sailing experience before signing up for the four weeks of intensive and rigorous training.

One crew member is Gerard Doherty, a retired Company Director, age 68, from Derry, who is sailing over 15,000nm on Legs six, seven and eight on board the Ha Long Bay, Viet Nam team entry.

Just before departing New York to sail home, he said: “Doing the Clipper Race has made me appreciate everything I have in my life.

“Being at sea has been the longest I have been away from my family and two daughters.

“Derry is such a good stopover because each time, the people of Derry reach out and welcome the Clipper Race with an open heart, making everyone in the race feel welcome in the city."

Talking about the Foyle Maritime Festival ahead, Gerard continued: “It will be outstanding. There’s an amazing programme, if you look back at the 2018 festival you’ll see the crowds, fireworks, dancing. Derry is just at a different level to every other city we have visited- I have to say that."

The lively Derry stopover, which includes the Foyle Maritime Festival, will provide much celebration before the final sprint race of the entire Clipper 2019-20 Race gets underway on Sunday July 24 with the fleet bound for the Royal Docks in London, UK.

Here, the overall winner of the 2019-20 edition will be crowned victorious.

The Clipper Race is the only event of its kind which trains people from all walks of life to become ocean racers.

Participants sign up to compete in one or multiple legs, or the full eleven-month, 40,000nm circumnavigation. On this edition, a third of the Race Crew are female, including several circumnavigators.

The Clipper Race was founded by Sir Robin Knox-Johnston, the first person to sail solo and non-stop around the world, and the sailing event recently celebrated 25 years since its first edition in 1996.