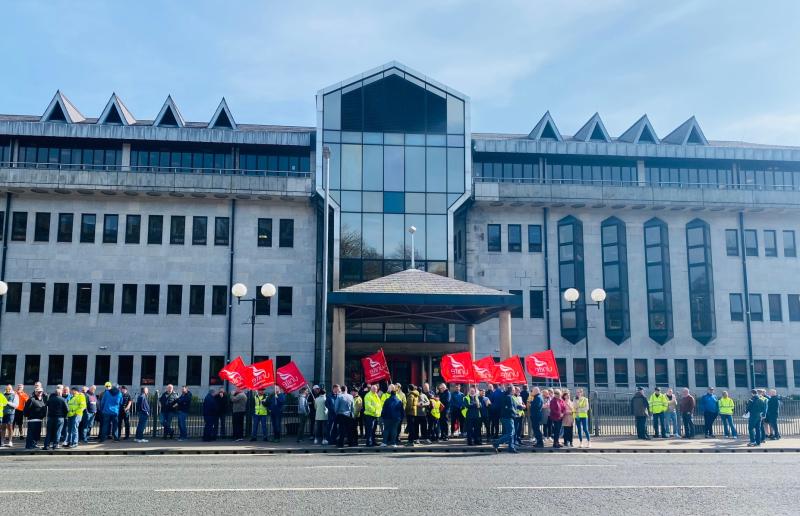 Council union representatives are currently in negotiations with Council in a bid to come to an agreement regarding their pay. If an agreement is not met, Council workers will strike for four weeks.

The council workers union is waiting on Council responding in full to their demands for a fair pay rise and other working benefits. These discussions are part of the ongoing pay dispute between Council and its workers since the first strike in March this year.

Council met with the UNITE at a Special Council Meeting last Friday (July 1) where two out of three demands were discussed.

If the proposal provided by Council at the next meeting is not something that the UNITE Union can agree to or adapt accordingly, the union has stated intentions of a month long strike.

Paddy Curtis, a council leisure worker and UNITE union representative said: "If members agree to the proposal at the next meeting, there will be no strike, that is what we want, something we can work with. But, if not, there will be a strike in July.

"We need something to take back to our members to make a decision going forward to accept it or not. We are not willing to wait any longer."

People Before Profit Councillor, Shaun Harkin, says he fully supports the "modest demands" of council workers and Council should meet these demands.

Councillor Harkin said: "Council workers deserve to be treated with respect. They have been forced, unfairly in our opinion, to take strike action for modest demands for a pay increase.

"We think the proposals made by trade unions to resolve the dispute are reasonable and should be met by the Council.

"Council workers have seen the value of their wages plummet over the last decade and the cost of living crisis has compounded this.

"People Before Profit encourages all workers in the public, private and community sectors to demand cost of living pay rises in the face of spiralling inflation. There's clear support for real wage rises and a willingness to take action."

A spokesperson for Derry City and Strabane District Council confirmed that Council is continuing with discussions and negotiations with the unions representing employees of Derry City and Strabane District Council in relation to the ongoing pay dispute around aspects of local government - employee pay and conditions - which can be considered at local Council level.

They stated: "The Council remains committed to this positive engagement and to continue with the process going forward to reach a mutually agreed and constructive outcome."