An honour and a privilege to be Derry's new Deputy Mayor, says Angela Dobbins 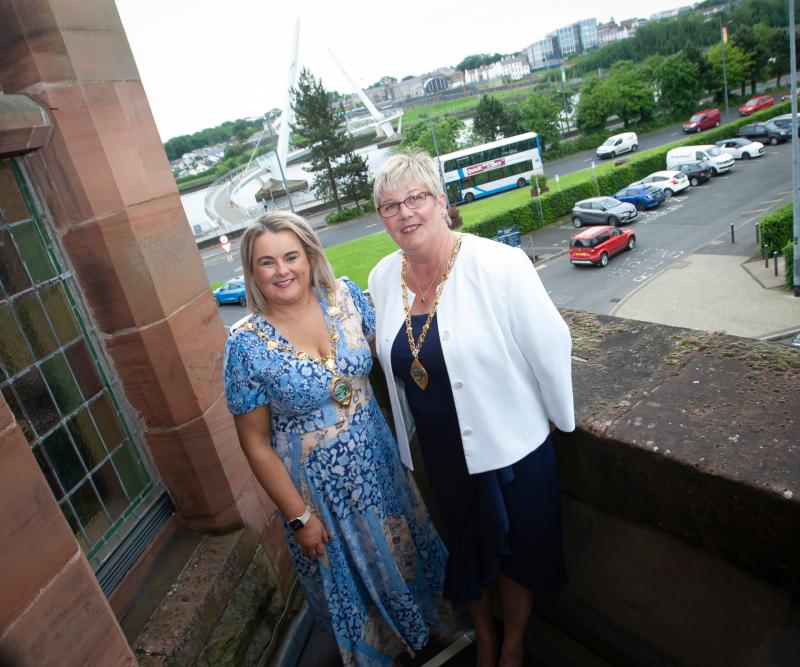 “An honour and a privilege” was Cllr Angela Dobbins' reaction after being elected as Deputy Mayor of Derry City & Strabane District Council.

The SDLP Councillor, who replaces outgoing Deputy Christopher Jackson, will now work alongside her fellow Ballyarnett representative, Sandra Duffy of Sinn Féin who herself was elected Mayor.

Cllr Dobbins has served the Ballyarnett ward for the past 11 years and has chaired both planning and environmental committees during her time on the Council.

She paid tribute to the outgoing Mayor and Deputy Mayor and reaffirmed her pride in both the city and district and stated it was an honour to be given her new role.

Deputy Mayor Dobbins said: “It is an honour and privilege to stand here today as the Deputy Mayor of Derry and Strabane.

“I’ve been grateful to have been elected to serve three terms on this council representing the people of Ballyarnett and giving a voice to the causes that matter to them and I believe that by working together we have made a real difference.

“I would like to pay tribute to the outgoing Mayor Graham Warke and Deputy Mayor Christopher Jackson for their efforts over the past year. They were handed the difficult task of leading a city emerging from the coronavirus pandemic and I hope to continue on their good work.

“Everyone in this area and right across the North and our island have been through a very difficult few years.

“But I’m delighted to say that most of us have now been able to return to the new normal, to get back to work, to see our families and friends more regularly and I’m delighted that we have seen the return of events, such as the Jazz Festival, which bring such a great buzz to our city.

“Although I admit I am very biased, I’m proud to be from this city and district. We are lucky to have some of the most generous, hardworking and supportive people anywhere.

“We are renowned for the warm welcome we extend to visitors and that has been exemplified in our burgeoning tourism industry which brings people from all over the world to Derry every year.”

The new Deputy Mayor stated that she was looking forward to getting out and meeting people and community groups in her new capacity and help provide further support to them.

She added: “One of the things I’m most looking forward to in my role as Deputy Mayor is getting out and meeting people.

“This is an area filled with extraordinary community groups and organisations who have stepped up and provided vital support and services to local people.

“We can also boast fantastic sports teams, a huge shout out to Doire GAA, the new Ulster champions, clubs, societies and religious organisations of which we can be rightly proud.

“While we have much to celebrate, this is a very difficult time for families in this area.

“People are coming under serious pressure as a result of rising food, fuel and energy bills and I have heard from countless people who are struggling to heat their homes, put food on the table and petrol in their cars.

“It’s an absolute disgrace that so many people in our city and district are living in poverty in 2022 and the onus is on us as councillors to do whatever we can to support them with the power we have.

“There are also thousands of people in this city stuck on waiting lists for vital health treatment. People waiting on everything from minor procedures to life-saving operations are facing longer and longer waits and the impact this is having on people’s health cannot be underestimated.

“Our city is also often rocked by the mental health crisis gripping these islands and there are few families here that have not been affected.

“It’s deeply regrettable that we continue to be impacted by the same old problems, a lack of jobs and investment, a lack of decent social and affordable housing and poor educational opportunities.

“The SDLP is determined to see the 10,000 university places we negotiated as part of the New Decade, New Approach agreement delivered for this city.

“We are acutely aware of the issues facing people and on this council we have a powerful voice to stand up for people here and we must ensure that it’s heard.

“Despite the challenges we face, there is plenty to be positive about. It is our job as councillors to ensure that we deliver for people here by championing the causes that matter to them and delivering the first class services that they have come to expect from this council.”

I also hope to use this opportunity to shine a spotlight on some of the causes close to my heart. I have always been a strong advocate for increased public safety and am particularly proud to have played a key role in having defibrillators introduced in our city. I’m also particularly passionate about environmental issues and protecting vital local services for our community.”

Deputy Mayor Dobbins also paid tribute to her family and friends for their support over the years and said that via partnership, can Derry City & Strabane District progress and thrive.

She continued: “I’d like to thank my family (husband Michael, and daughters Bronagh, Rachael, Emma and Lisa), my father, my brothers and my sister, my wider family circle and my friends for their encouragement and support over the years.

“I wish to thank our council officers and staff for their support, and last but by no means least my SDLP party colleagues. I have been very blessed to be surrounded by a great group of people both in my everyday life and in politics.

“I believe Derry City & Strabane District Council is blessed to have two strong women at its helm.

“Throughout my time on council I believe I have built a reputation as a public representative who wants to work with and for everyone.

“I think we are at our strongest and at our very best when we come together to deliver for Derry and Strabane.

“That’s the spirit of partnership I want to bring to this role as I embark on my year as Deputy Mayor and I trust my council colleagues will work with me to ensure it’s a success.” 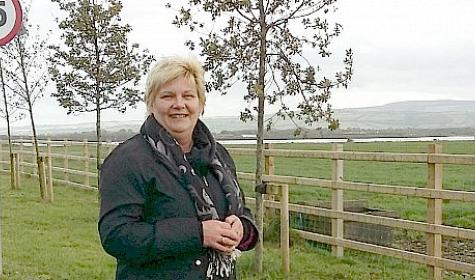 Cllr Angela Dobbins has been an SDLP Councillor for 11 years and has served both the former Derry City Council and current Derry City & Strabane District Council representing the Ballyarnett ward.

She holds an avid interest in planning and is very passionate about environmental issues and has been involved in these committees throughout her tenure.

Angela has also been chair of both these committees and has introduced environmentally friendly policies via motions to council, such as eradicating single use plastics and the reusable nappy voucher scheme.

Cllr Dobbins has championed the needs of the more vulnerable in our society and has been internal in shaping our council area into a more accessible and welcoming place for people with disabilities especially highlighting the needs of those with ‘hidden disabilities’.

She sits on various boards including The Honourable the Irish Society, Culmore Community Partnership and Advice North West where she actively fights for facilities and grassroots issues.

As a former Eucharistic Minister in her local Culmore Parish and Altnagelvin Hospital and as the Parish administrator for grouped parishes of Christ Church, Culmore, Muff and St Peter’s, Angela describes her faith as the foundation block in everything she does.