Some Derry Councillors joined the group in solidarity 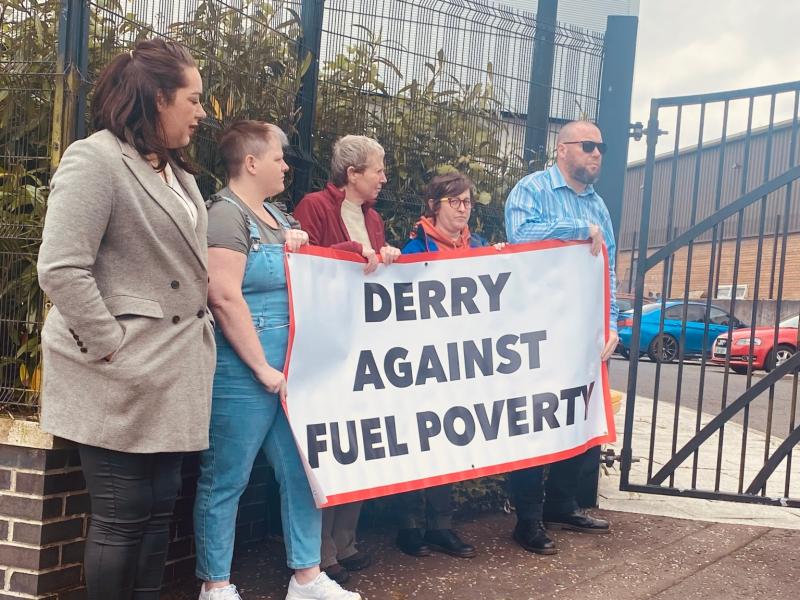 Derry Against Fuel Poverty protested peacefully outside the offices of Budget Energy in Springtown in Derry today (May 27).

Chanting, 'No more hikes,' the crowd demanded for the consumers of Derry and beyond to be supported and for energy companies to cut their prices, stop prices hikes and support their customers.

They are also calling for a functioning Executive at Stormont to help the North through the current cost of living crisis.

Speaking to Derry News at the rally, DAFP spokesperson, Sinead Quinn, said: "These protests started small and they are growing every time. They are little sparks and we have to add all these sparks together.

"We have to keep showing up and bringing people along, that's all we can do. There is a community here now that supports each other and it is powerful.

"There is money that is coming from Westminster that will go directly into people's bank accounts, that'll be to those with low incomes, pensioners and those with disabilities, and while that is completely and utterly welcomed, working people are being left out.

"Rishi Sunak didn't leave working people out, they were to receive £400 to come off electricity bills- I don't think that is enough but it is something- but the problem is that money will go to Stormont to be given out to working people and as we know, there is no existing Stormont Executive to do that.

"The problem also is that these are all very temporary solutions to a very permanent problem. Poverty should not exist in 2022 in the 5th largest economy in the world. The reality is people should not be choosing, 'heat or eat.'"

Prior to the protest, Sinead added: "We're absolutely sick of these hikes and can't withstand much more especially with the lack of financial support from the government.

"Thankfully, we're now in early summer when our heat and electricity usage is reduced somewhat but it isn't going to be long until Autumn and who knows how many more hikes we will have been hit with by that time.

"We really need a broad coalition of the willing here in the north to push the governments in Stormont and Westminster to do the right thing by the working class, in work and out of work, and of course, the DUP need to be pushed back in the doors of Stormont sooner rather than later.

"It's only been weeks since MLAs were reelected and we now need to see the same enthusiasm, passion and drive they had during their election campaigns applied to tackling this impasse and this crisis.

"We expect politicians to come together and fight together against any and all obstacles that stand between us and that £420m being allocated to the most in need at this time.

"In the absence of a broad political alliance to tackle this impasse and the cost of living crisis, we will continue to organise protests and rallies in the city to keep our voices heard and to keep hope alive.

"We welcome support from opposition voices and those who believe that poverty - fuel, food, period or otherwise - has no place in the North any longer."

Derry councillors, People before Profit's Shaun Harkin, Alliance's Rachael Ferguson and Aontu's Emmet Doyle, also joined the protesters in solidarity as the North continues to be without a working Executive at Stormont.