Ultra-Endurance Athlete and Mental Health and Wellbeing campaigner, Danny Quigley, has received the Freedom of Derry and Strabane at a special ceremony at the Guildhall.

The Ironman champion completed a remarkable ten long distance triathlons in ten days last year, raising over £100,000 for local charities and awareness for both mental and physical health.

Mayor of Derry City and Strabane District Council, Alderman Graham Warke, officially conferred the honour on Mr Quigley at a special meeting of Full Council at the Guildhall followed by a reception in the building’s Whittaker Suite.

Mayor Warke said: “It was a huge honour for me to confer Danny Quigley with our Council’s highest accolade in recognition of his phenomenal endurance achievement and the critical work he has done to promote positive health and wellbeing in our City and District.

“The man is an inspiration and the mammoth funds he has raised for local charities will have a positive impact on so many lives.

“He continues to inspire by using his profile and knowledge to spread his message of how to take care of your mental health and the positive role physical activity can play in that.

“We are so proud of Danny and on behalf of our City and District I want to thank him for the selfless work he has done in the community and congratulate him on joining the illustrious group of people who have been conferred with this honour.” 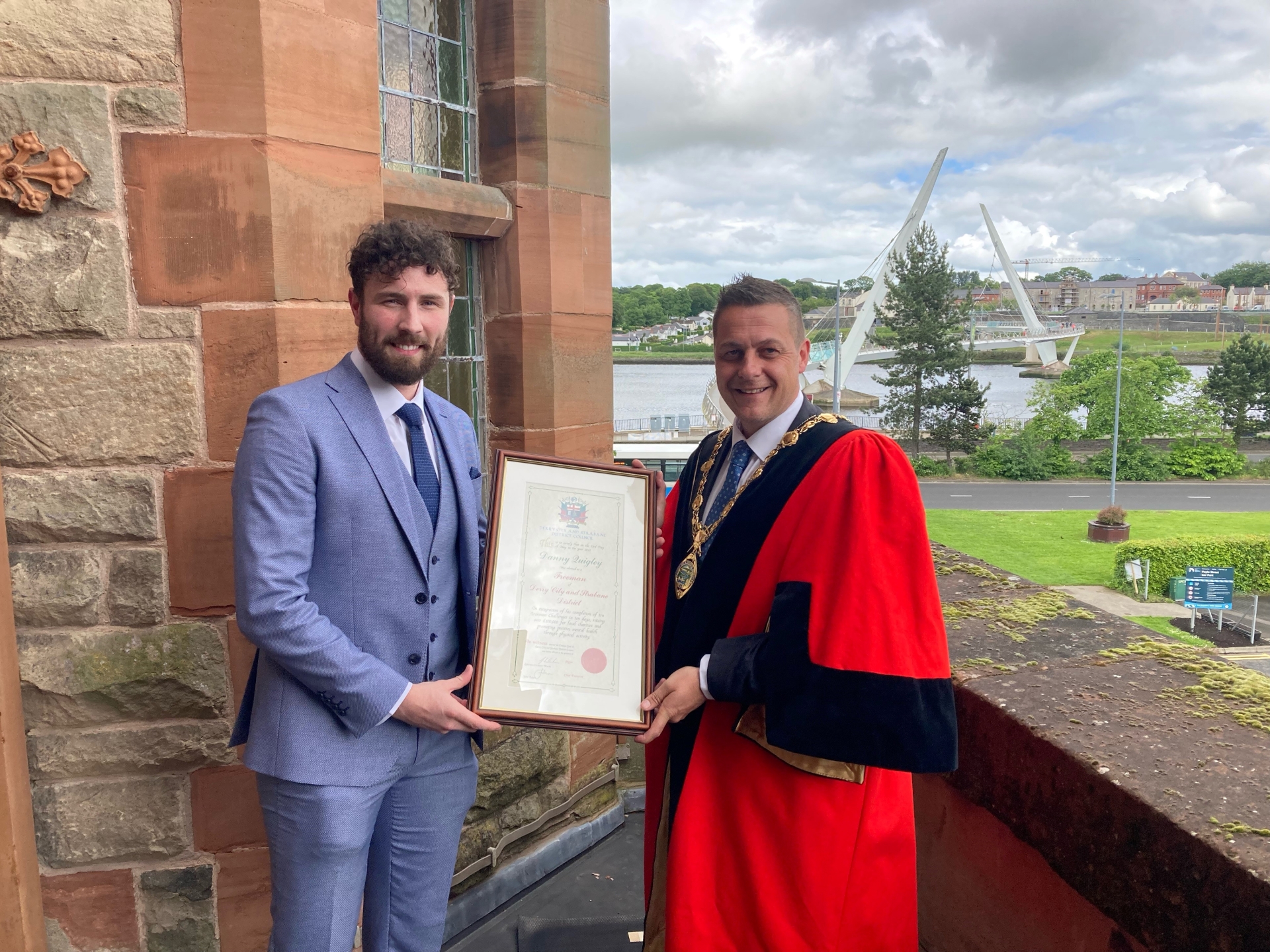 Danny Quigley decided to attempt the gruelling feat of 10 triathlons in 10 days in memory of his father Colm Quigley who died by suicide 10 years ago and raise awareness of mental health and suicide prevention and raise funds for Pieta House and the Bogside and Brandywell Health Forum’s Counselling Service.

Danny also formed the Danny Quigley Fund this year to help provide much needed one to one counselling services for individuals in the North West and tackle the high rate of suicide.

The decision to confer the Freedom of the City on Danny was made at a Council meeting earlier this year following a notice of motion by Sinn Fein Councillor, Chris Jackson.

The motion received cross party support with all councillors paying tribute to his outstanding work.

Other recipients of the Freedom of the City include Dr. Tom McGinley, of the Foyle Hospice and Nobel Laureate, former SDLP leader John Hume and Derry City’s treble winning manager Jim McLaughlin.