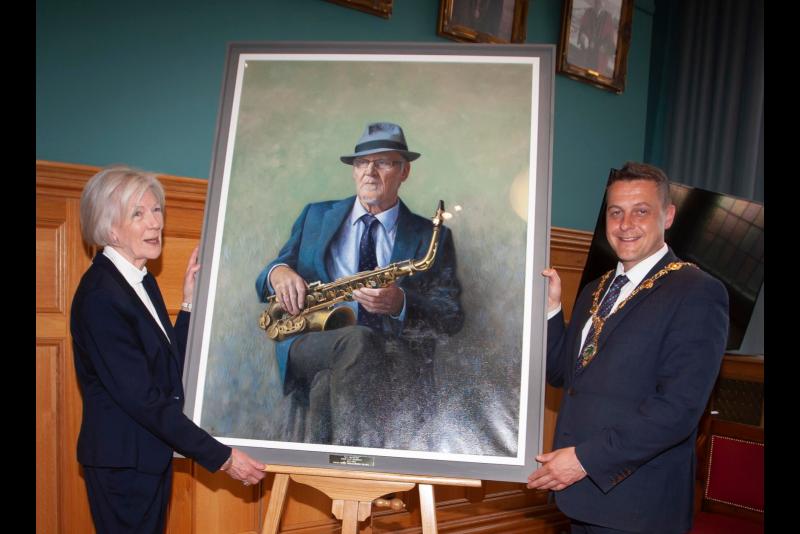 A portrait of legendary jazz musician, Gay McIntyre, has been unveiled at Derry's Guildhall

The family of iconic local Jazz musician, Gay McIntyre, were invited by the Mayor of Derry and Strabane, Alderman Graham Warke, to the Guildhall yesterday for a special reception in his honour on the opening night of the City of Derry Jazz Festival.

The Mayor took the opportunity to pay tribute to the internationally renowned jazz saxophonist who was one of the original founders of the Jazz Festival and whose name became synonymous with the event over the years.

Mayor Warke said: "It was a real honour to host a reception for the family of iconic Jazz legend Gay McIntyre yesterday on the opening day of the City of Derry Jazz Festival.

"Gay will be much missed at this year’s festival though his legacy lives on in many of the events taking place throughout the weekend.

"Family and friends came together to celebrate the music he brought to the people of Derry with such passion throughout his life.

"It was a fabulous evening and a fitting tribute to our own Godfather of Jazz."

A portrait of Gay was unveiled at the reception and can be viewed in the Guildhall over the course of the festival, which this year features a number of tribute events in his honour.

Local Jazz legends including Gay's own son, the acclaimed musician Paul McIntyre, came together to celebrate the music that Gay loved and brought to the people of Derry with such passion throughout his life.

The Gay McIntyre Stage will be the focal point of the outdoor activity at this year's festival with performances throughout the weekend in the Guildhall Square.

There were also a series of Jazz master classes held at Foyle College where students took part to remember the Jazz legend.

The event was part of the Gay McIntyre Woodwind and Brass Masterclass Series, and one of the tributes to the Jazz Legend whose name has become synonymous with the Festival over the years.