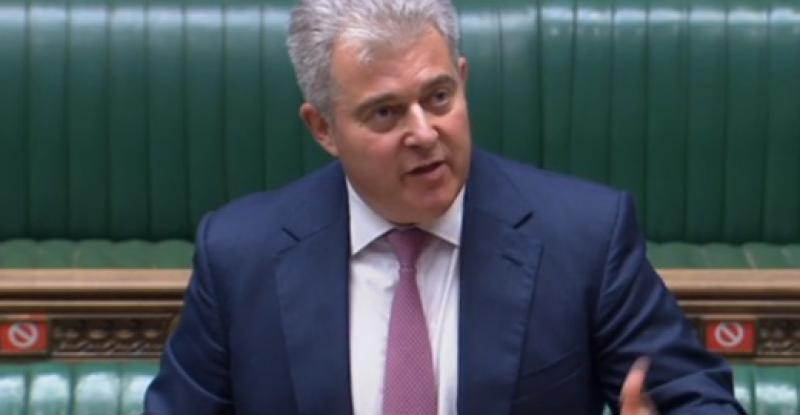 Secretary of State for Northern Ireland, Brandon Lewis has been criticised by Foyle MP and SDLP leader, Colum Eastwood

Foyle MP, Colum Eastwood, has said that Secretary of State Brandon Lewis should spend far less time attempting to defend the indefensible actions of Boris Johnson and more time working to deliver much needed support to families struggling with the cost of living.

Mr Johnson has been fined for hosting parties at the Prime Minister's residence of 10 Downing Street which were in breach of the Covid-19 restrictions that his own government had put in place.

Speaking on Sky News, Mr Lewis said: “I worked with the Prime Minister on a range of issues across the UK and particularly for Northern Ireland and I’ve been working for someone whose focus is always been on delivering for people.

“The Prime Minister himself has been very clear in the statement last week. He has apologised for what has happened.

“At every point he has been clear at what he believes to have been the truth.

He has paid that fine, he has apologised for that. He absolutely accepts the police have found the rules were broken. What he said to Parliament he believed to be true at the time.

However, Mr Lewis' defence of the Prime Minister cut no ice with Mr Eastwood who demanded the Secretary of State get back to his real job of helping the North of Ireland through the cost of living crisis instead of providing excuses for his leader's behaviour.

The SDLP leader said: “It’s remarkable that the Secretary of State has the time to run around TV studios defending the indefensible behaviour of Boris Johnson, Rishi Sunak and their mates after they received and accepted penalty notices for breaches of Covid-19 rules.

“People in Northern Ireland are working every hour they can to heat their homes and put food on the table.

“Instead of playing politics, Brandon Lewis should be using his office to bring forward legislation to unlock the £300m sitting dormant in a Stormont bank account and supporting our plan to get that money to working families now.

“Is it any wonder faith politics is plummeting when those who hold high office have so little understanding of what ordinary people are going through?

“The SDLP will continue to make the case for our Cost of Living Action Plan that would get emergency support to every household and provide more than £1,200 to those who need it most.”

The Secretary of State has been approached for comment.