Derry and North-West has been failed by Stormont, says leading academic

In an exclusive interview with The Derry News, Professor Colin Harvey - who teaches human rights law at Queen's University and is a board member of the Ireland's Future Organisation - says unfulfilled promises made to Derry and the North-West must be made good on by the Stormont Executive in order to ensure the region enters any future united Ireland settlement from a strong position 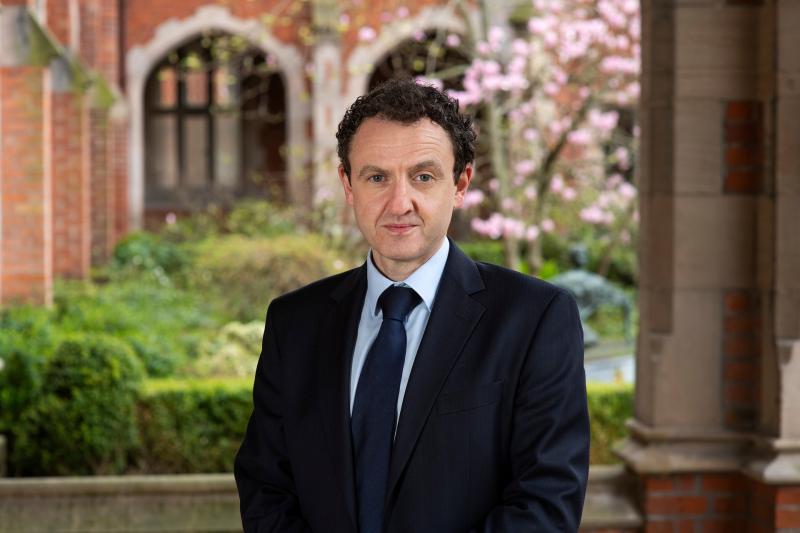 Professor Colin Harvey of Queen's University: "The treatment of Derry and the people of the North-West remains scandalous – including in relation to higher education. That needs to be dealt with now."

A leading academic has stated that the Executive at Stormont must stop “failing Derry and the North-West” and make good on its promises to the region ahead of any potential post-united Ireland 'yes-vote' poll victory.

Professor Colin Harvey, who teaches human rights law at Queen's University and is a board member of the Ireland's Future Organisation, insisted it was “ absolutely essential” that issues and promises regarding higher education, rail provision and job investment and so on, were sorted out and delivered on long before any constitutional change.

The former St Columb's pupil who grew up in the Carnhill area of Derry, stated that such issues needed to be resolved and measures implemented so that the city and the North-West did not feel the same disconnect with the Dáil in Dublin, post-unity, as it currently does with Stormont in Belfast.

“I think the treatment of Derry and the people of the North-West remains scandalous – including in relation to higher education. That needs to be dealt with now.

“But ultimately, the North-West and Derry has been failed by the current constitutional arrangement. So if things were to change on this island, it's absolutely essential that the needs of the North-West of this island – including Derry – are put front and centre of that conversation.

“I think that the evidence that I can see is that the division and separation that has been brought on by the partition of this island – particularly in a post-Brexit context – has failed Derry.

“In fact it has failed many areas around the border across Northern Ireland so the evidence that I've seen and everything that I've read suggests that the North-West and Derry stands a better chance acknowledging the failures now.

“But none of that should neglect the reality and the difficulties that Derry is facing – and that of the North-West including Co. Donegal – need to be dealt with and tackled in the here and now.

“Promises have been made to Derry in particular around higher education and university provision and my view is that those promises need to be delivered now.”

One reason why it is imperative for the above issues to be resolved and measures implemented would be to ensure that Derry and the North-West enter a unified Ireland from a strong position.

Questions still remain how strong the city and region's voice will be in Dublin. While Stormont has had its critics, it has served as a vocal point for the North as a whole which might disappear if a unified Ireland centralises everything in the Republic's capital city.

Would Derry and the North-West have to abide with such a scenario or should the push for a devolved, federalised structure begin now ahead of a unity poll?

Professor Harvey added: “One of the reasons why I've placed such a focus on advanced preparation and planning is that if there are referendums on the island, there has to be clarity about what a united Ireland actually means.

“That's why, in my view, these discussions need to be clarified in the here and now. The Good Friday Agreement does frame that, to some extent, in terms of the values and principles.

“But I think that puts the onus very strongly on those who are proposing constitutional change – to spell out in precise terms what model is being proposed.

“Or, if a model isn't proposed, what's the mechanism for arriving at a model? What I mean by that, for example, are people suggesting something like a constitutional convention that would happen after the referendums? To sit down and draft a new constitution or will all that be available in advance of the referendums taking place?

“It's an excellent question and one that needs to be addressed urgently.”

Preparing for a prospective united Ireland has drawn a lot of unwelcome attention towards Professor Harvey in the media coming from former Labour MP Kate Hoey and fringe Loyalists on social media sites.

Professor Harvey though insists he will not be deterred from his work and has thanked all who have publicly come out to support him from such attacks.

He said: “First of all, I would just welcome the expressions of solidarity and support and note, for example, of statements from UN special rapporteurs of support and I very much appreciate that.

“I think myself and a range of people have become a focus for sharpened attention over a number of years for entering this space and this discussion. Personally, I won't be derailed or distracted .

“My strong view is that the planning and preparation work needs to be done. Academics and others have a central role in doing that work. You could say that we have almost a responsibility to undertake that advanced planning and not repeat the mistakes that were made in the Brexit referendum in order to get things right on this island.

“I welcome the solidarity and support. But I'm really saddened by some of the highly-personalised attacks that have been made against me. They are wildly irresponsible in the current climate.

“But I will not be deterred, I won't be derailed and I will press on with the work that needs to be done in advance of these referendums taking place.

“I would also like to take the opportunity to express complete solidarity with journalists here as well. Journalists themselves have also become a focus for much of this.

“We all have a responsibility in that respect but primarily at the moment, I want to – as an academic who has found himself to be somewhat of a lightening rod for some of us – express my solidarity with journalists who find themselves very often under attack.

“This is a very febrile, post-conflict society that we're all trying to do our jobs in.”