"One thing that is certain, Bloody Sunday will never be forgotten" 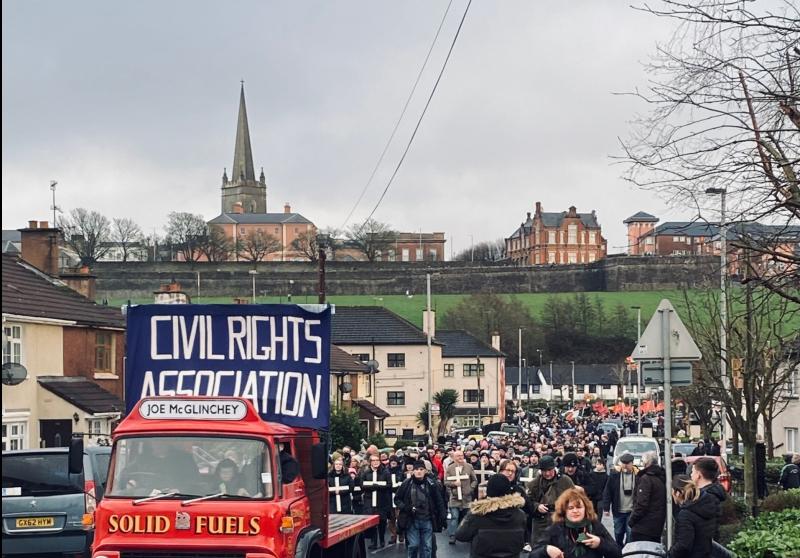 The weather did not stop the people of Derry as thousands took part in the March for Justice on the 50th anniversary of Bloody Sunday.

The route retraces the original route of the civil rights march 50 years ago in 1972. Many held signs demanding justice from the British Government for those who lost their lives.

When the crowds returned to the Bogside, there was a rally at Free Derry corner with Bernadette McAliskey, née Devlin, and well-known civil rights campaigner Eamonn McCann among the speakers.

Irish civil rights leader, Bernadette Devlin McAliskey, gave a powerful speech to the crowd, "People walk this road every year, there has to be another generation of people, like the young people here," she said.

"I'm so glad to see so many young faces here. One thing that is certain, Bloody Sunday will never be forgotten.

"This was a day when the British Government policy which had started weeks and months before, came to fruition on the street.

"Internment was introduced to try and break the people. They have responded with more marches and strikes. People tend to forget history, but nowhere in the six counties has forgotten.

"It was that kind of mass action that the British Government was afraid of. They were afraid of the marches as a result.

"What they are afraid of is this here. Masses of people who won't quit. People who will tell their children and their grandchildren.