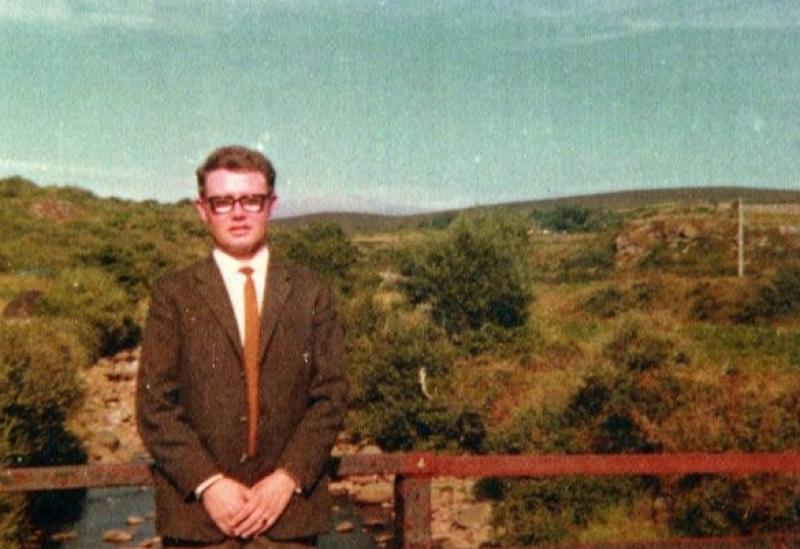 Joe McKinney, his brother William, known as Willie to his friends and family, and their eight siblings crew up in Westway, Creggan.

Willie was born in Saint Columb’s Way and Joe was born later In Orchard Lane in Derry.

There were nine, nearly ten years between the two brothers as Willie was the eldest child in the family.

When their father moved to work for his company in Luxembourg for four years, Willie stepped up and became a parental figure for his younger siblings, including Joe.

Willie, 27 and Joe, then 18 at the time of the civil rights march on Bloody Sunday, attended together but went their separate ways on the day.

Willie, a printer for the Derry Journal, was an avid photographer and had his new camera, gifted as a Christmas present, with him to take some photos and videos of the march.

Sadly, Willie was one of the 13 civilians shot and killed by Britain’s 1st Battalion Parachute Regiment.

Willie was engaged and due to wed his partner, Elizabeth, at the time of his death.

Elizabeth married another gentleman years later but, throughout her life until her death only a couple of years ago, she never celebrated her own birthday after Willie died.

Elizabeth had bought Willie a long lens camera as she knew he would always film riots and marches up close and put himself at risk.

The last time Joe saw his brother was up a tree with his camera, filming the march.

Joe said Willie had no fear when it came to getting a good picture or video. People would run away at other marches or riots and Willie would be right there getting the perfect footage.

She had asked him to stay back and use the long lens to take close up pictures.

Willie was shot on Bloody Sunday in the back and arm in Glenfada Park as he ran for cover.

Willie was pictured helping to carry the body of 17-year-old Michael Kelly right before shots were fired and the group were forced to scatter and Willie was fatally shot.

Joe remembers William as a generous, talented, musical and intelligent young man, “If he was here today, he would be obsessed with all this new technology,” Joe said of his brother.

“He was so fascinated with the latest technology back then; I can only imagine what he’d be like in the world we live in today. I think he would be a bit of a computer whizz.

“He was going to go to college to learn how to use the new printing machines they had just bought for the Journal. He was so into his photography too that many people thought he was a photographer for the Journal, but he was the printer.

“Larry Doherty was the photographer for the Journal at the time and they were good friends. He bought his camera from Larry.

“He was always taking pictures of my Ma and Elizabeth and they’d be trying to hide from the camera.

“There are so many photos and footage available in the archives and at the museum that are his work. The riot footage as you walk into the Free Derry Museum, that’s Willie’s footage."

"Not long before he died, he bought a new ITT stereo. It was his pride and joy.

“His girlfriend worked at the record shop so we would get our records at cost price and all us siblings would use the stereo and buy our own music records.

“When he died, it wouldn’t get played when my Ma and Da were in the house. The stereo was only new, it couldn’t have been more than six months to a year old.

“We didn’t play it in case it annoyed them but when they were both out of the house, which was seldom, I would play my music.

“Eventually, it got used. I said to my Ma one day, Willie wouldn’t want that sitting there gathering dust and it was then she said, well go on, Joe.

“Willie also played the accordion, really well actually, he could read music, you see. He also bought a Mandolin which he planned on learning how to play.

“He was teaching me how to play a smaller version of his piano accordion. Every Sunday night in the house, he would be teaching me. He was always so paternal.

“He wouldn’t let any of us give cheek to our mother, he would have got on to you then. He would verbally chastise you, telling us we can’t speak to our mother like that.

“He would also buy Mickey Mouse films and use his projector, an old school projector, to project them onto a white sheet for the kids in the street to watch. We were all about seven or eight and he was working away at that time.

“He would stand there and turn the manual crank so we could all watch the film. He was a generous man.

“I always remember he gave me one pound when I was going with the school to Armagh one day and that was a lot back then, a big lot of money.

“We didn’t get pocket money when we were children because my father said when we did earn money, we would appreciate it more, but Willie treated us when he could.”

Willie worked late on Monday and Thursday nights to get the Derry Journal ready for the Tuesday and Friday release.

He always brought home six papers each release day so that the kids could run round to all the auntie’s houses and give them their papers for free.

Joe says his family grew up very close and he has many fond memories of Willie from his childhood. 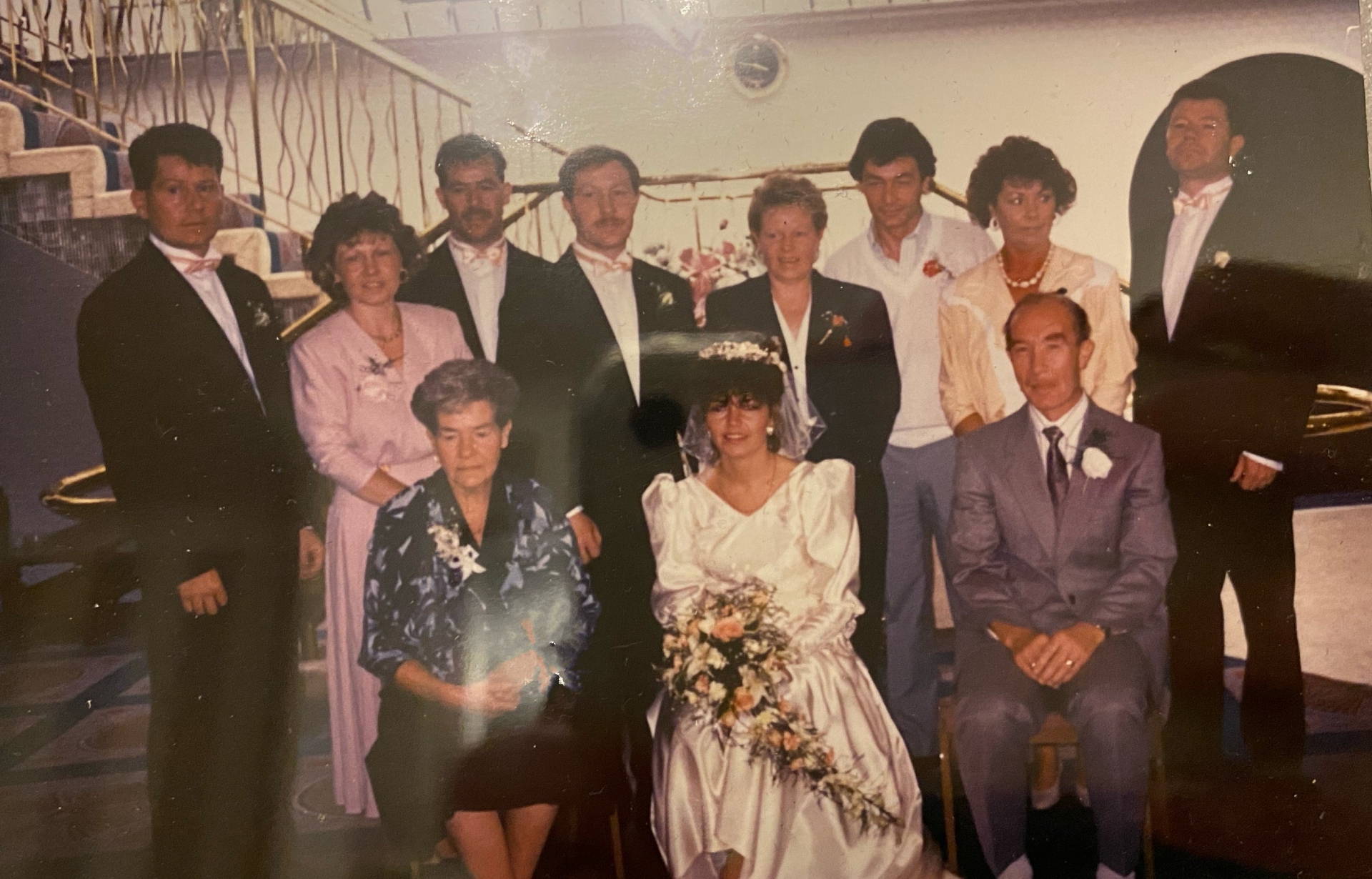 Joe and his family at his sister's wedding in the years after Willie's death, his mother sits front left

Joe continued: “I really only have one memory of Orchard Lane. In the house we lived in, it was a really long hallway. They had a dartboard on the front door, at the back of the door.

“The older ones would be practising darts at the front door; any poor visitor was getting a mini dart to the head if they walked in. Willie had a great sense of humour.

“I was only four at Orchard Lane, that is the only memory I have of there. Then we moved to Creggan, we all remained really close.

“We’re not as close now that we’re older but we had a great childhood. Politics wasn’t brought up in our house.

“There was never any talk of the Troubles either, even after Willie was killed. My Ma and Da never spoke about it.

“My Ma was only a wee woman but her inner strength was colossal. She never showed us she was hurting after Willie died and she never spoke any hate.

“If we saw on the news that a soldier was killed, she would say, ‘that’s somebody's poor soon,’ she was a very strong woman.”
Joe said, until the fight for justice began, Bloody Sunday, and what he witnessed, was never discussed in his house either.

Joe never spoke to his children about politics or the tragic events that happened that day.

“I even feel, if it is possible to forgive, I would have tried to forgive all those years ago when it happened, if they had just admitted the truth and taken responsibility and liability for their actions.

“They never did and I will never be able to forgive now. Now I will just try to get justice for Willie and the other innocent people that were killed, we all will, to get the truth.”