Bloody Sunday: What the world said following the findings of the Saville Inquiry 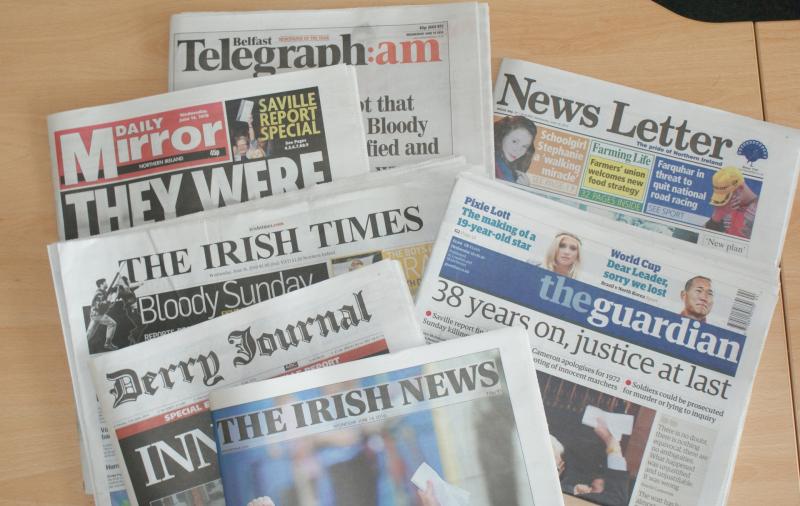 A look at what newspapers, both nationally and internationally,  reported following the findings of the Saville Inquiry in June 2010.

By concluding that those who were killed and injured on Bloody Sunday were shot by unjustified firing, the Saville Report has established that the British government was responsible for killing innocent civilians in pursuit of its policies and politics in Northern Ireland.

Saville is now more than an inquiry. It is a history lesson.

History, said George Orwell, is full of ignominious getaways by the great and the famous.

Widgery was the British government’s getaway vehicle from Bloody Sunday.

Yesterday Saville forced them to abandon it. In doing so, he moved at least a part of Irish history from being an art to a science, by critically defining the events of the most significant afternoon in our recent past.

Those who argue that the report is unhelpful to an already strained political relationship in Stormont are missing the point. The only was to resolve the past is to establish its truth. Saville has done that he has done it well. It is up to our politicians to handle that truth.

The Saville Inquiry cost too much and took too long, but it has finally – and far too belatedly – set the record straight about those who died on Bloody Sunday, stating clearly that none of the killings could be justified.

Although the terrible events of Bloody Sunday were a defining moment in the history of Northern Ireland, we must not forget all the other innocent people who died in the Troubles.

That is why it was so fitting that a minutes silence was a mark of respect to all those who died in the troubles. There will have been many watching and listening yesterday who still grieve for loved ones whose untimely deaths did not receive as much attention and they too must be in our thoughts today.

Their hurt has been deepened by the fact that others linked to paramilitary groups have yet to come clean on their roles in the conflict. The army has faced public scrutiny and will now have to accept the damning truth about Bloody Sunday, but that is what sets them apart from terrorists past and present.

That was a shameful day in the history of the Army in Northern Ireland, although it must also be remembered that soldiers, along with the police, helped prevent the province from descending into civil war during three decades of unremitting terrorism during which they displayed daily heroism.

The Saville report is not the end of the process. The Public Prosecution Service and the Chief Constable will now examine the findings and will have the onerous task of deciding if any of the soldiers should be prosecuted.

Fittingly, one of the first actions of the relatives after reading the Saville report was to call on the crowd outside Derry’s Guildhall to observe a minute’s silence for all those killed in the Troubles. There are some 3,000 unsolved murders where relatives don’t know who killed their loved ones or why. They share many of the feelings of loss, of injustice and of grief that the relatives of the Bloody Sunday dead harboured for years.

The Eames/Bradley report attempted to create a process which would help all relatives gain some closure but that report now appears to have been shelved, but it would surely be justice for all if a truth and reconciliation process could be established at which all sides of Northern Ireland’s dirty war could give evidence. Saville has given justice to the dead and survivors of Bloody Sunday, but many others are still denied it.

It may have taken 38 years, but the British government has finally confronted its responsibilities to civil society and to the rule of law by addressing one of the darkest moments of the Northern Ireland Troubles and condemning the killing of innocent civilians on the streets of Derry in 1972. Prime Minister David Cameron formally apologised in the House of Commons for the unjustified and unjustifiable killing of 14 civilians by British soldiers and said he was deeply sorry.

For the British government to formally acknowledge that troops from the Parachute Regiment opened fire and killed innocent civilians in contravention of their orders and then lied about it, will have been deeply unsettling.

That acceptance — based on the comprehensive and unambiguous findings by Lord Saville in a 5,000-page report — marks a watershed. It provides the people of Northern Ireland with absolute clarify concerning a divisive and traumatic event, along with an opportunity for reconciliation. And it reflects undertakings in the Belfast Agreement for both governments to exercise their powers with rigorous impartiality on behalf of all the people.

Bloody Sunday represents a horrible legacy from a terrible past. In all truth, it probably garnered recruits for the Provisional IRA. The establishment of the Saville inquiry coincided with the Belfast Agreement. Today, there is a functioning, powersharing Executive and an elected Assembly. The past is a separate country and the acts of violence that scarred it should be left there.

The Saville inquiry certainly took too long and cost too much. But the report is devastating. Its conclusions simply cannot be ducked. Nor, to his great credit, did David Cameron attempt to duck them yesterday. They were absolutely clear, the prime minister confirmed, and not open to doubt.

Bloody Sunday was not a premeditated state conspiracy, Saville finds. But the main actors were not brave British soldiers but, too often, trigger-happy paratroopers. The parachute regiment went into Derry’s Bogside in response to an order that should not have been given. They fired the first shots at civilians who had been taking part in a civil rights march. The people at whom they fired were unarmed and in some cases fleeing.

A few victims were shot on the ground. None of the dead or wounded was doing anything that justified their being shot. The soldiers gave no warnings. They lost their self-control. Then some of them lied about it afterwards. For all of which, Mr Cameron said, the British government and people were deeply sorry.

If the evidence permits, which at this distance it may not, those who killed the innocent in Derry in 1972 should be prosecuted. No amount of political convenience should be permitted to stand in the way of justice.

The innocence of those killed on Bloody Sunday is now beyond doubt.

The victims’ lack of guilt has been officially recognised 38 years after the massacre.

As David Cameron admitted in the House of Commons, the shootings were unjustified and unjustifiable. The absence of a warning before the Paras opened fire, demonstrators shot as they helped the wounded or fled and the lies to cover-up the atrocity is a horror story which had to be told. Bloody Sunday was the moment the Troubles spiralled out of control, helping the IRA secure recruits and funds from people who suddenly saw the Army as the enemy.

It is within this context that the Saville report must be viewed - an investigation into a blood-soaked turning point in the Northern Ireland conflict.

Bloody Sunday undoubtedly prolonged the unrest and cost lives beyond that awful day.

The families of the 14 who died and the injured waited too long for this verdict but at last we have it.

Criticism of the cost of the inquiry misses the point that this was an event so awful the poison had to be drawn.

Tony Blair understood that. David Cameron acknowledged it by apologising. We should all welcome the truth.

The decision by former Prime Minister Tony Blair to order the investigation in 1998 and Mr. Cameron’s forthright embrace of its conclusions should be an example for countries and leaders around the world. The inquiry determined that British soldiers fired without provocation or warning on the civil rights march in the city of Londonderry on Jan. 30, 1972. It said that the 14 people killed and 13 people wounded were unarmed.

That should discredit once and for all an earlier whitewash investigation that, weeks after ‘Bloody Sunday,’ exonerated the soldiers, saying they were fired upon first. This latest inquiry lasted 12 years, took evidence from nearly 2,500 people and produced an exhaustive 5,000-page report.  The findings are understandably dredging up raw emotions on all sides. With the 1998 Good Friday agreement, Northern Ireland has come a long way on a very difficult path toward peace. The hard truth of this inquiry and Mr. Cameron’s ringing apology should help move that process and the cause of peace forward.