Lynch’s Eurospar, Greysteel is the third outlet from the retailer to open under the popular Eurospar brand 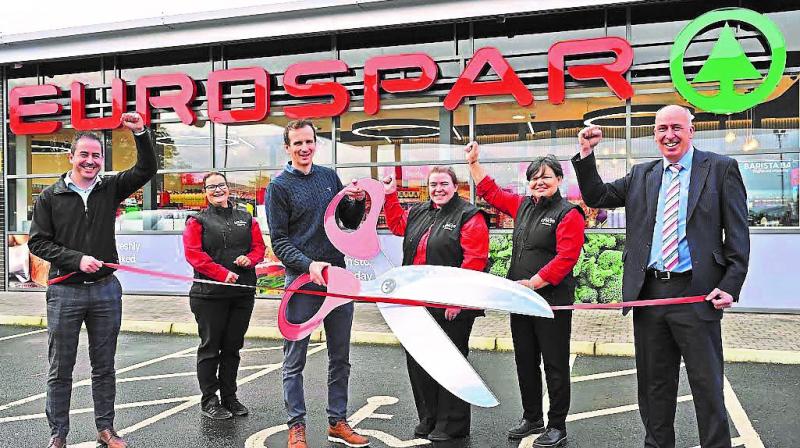 Lynch’s, the local family retailer which operates a number of Spar and Eurospar stores and supermarkets, have opened their third local supermarket bringing their total store number to eight across the North West and Mid Ulster.

Lynch’s Eurospar, Greysteel is the third outlet from the retailer to open under the popular Eurospar brand and has allowed management to more than double the number of jobs available, now employing 48 locally.

Acquiring what was previously a Centra store on the site, company director Paul Lynch says the community needed a larger format supermarket brand that would not only bring a host of fresh and local produce and ranges, but would be convenient and complemented with services vital to the local area.

Paul said: “We have invested around £800,000 to bring our supermarket experience to the Greysteel area and are so proud to open the doors.

“We have more than doubled the size of the space which allows optimum navigation throughout the aisles, where shoppers will find an increased variety and range of fresh and local foods including our own meat offering and pre-packed ranges.

“Importantly, we have continued the on-site partnership with Nicholl Fuels to offer locals a 24-hour fuel service with pre-pay pumps and we have 60 parking spaces to allow shoppers to conveniently load their cars safely.”

The team has also retained important services including the Post Office, ATM, Lotto and PayPoint and added even more amenities and initiatives to bring value and choice to the area.

The deli now serves an extended range of hot and cold food to go alongside Barista Bar coffee and Spar bakery, and shoppers can take advantage of the many deals available including the current '12 Deals of Christmas' campaign which drops the price of big name items and festive essentials every week in the lead up to Christmas.

Paul continued: “Eurospar also price matches over a thousand branded products to Tesco each week, so paired with our consistent schedule of value deals, we’re bringing a huge amount of savings for shoppers.”

As is the Lynch and Eurospar ethos, the team in-store will implement outreach initiatives with the local community, sponsoring and supporting local clubs and organisations, while also fundraising for charity partner Cancer Fund for Children.

“We now have 72 Eurospar supermarkets in Northern Ireland, each one bringing a wealth of convenience in a large format supermarket to their areas.

“The Lynch’s are experienced independent retailers and know how to engage with their local communities, with an incredibly high bar set for customer service.

“It's fantastic to see the Eurospar brand thriving under our independent retailers and we wish Lynch’s the best of luck with their new business.”

The new supermarket in Greysteel joins Lynch’s portfolio of stores including Eurospars in the Skeoge area of Derry and Draperstown in Magherafelt, plus Spars in Dungiven, Claudy, Newbuildings and Trench Road in Co Derry, and Clonoe in Coalisland.