“I want every product to either make someone laugh or pull at someone’s heartstrings.” 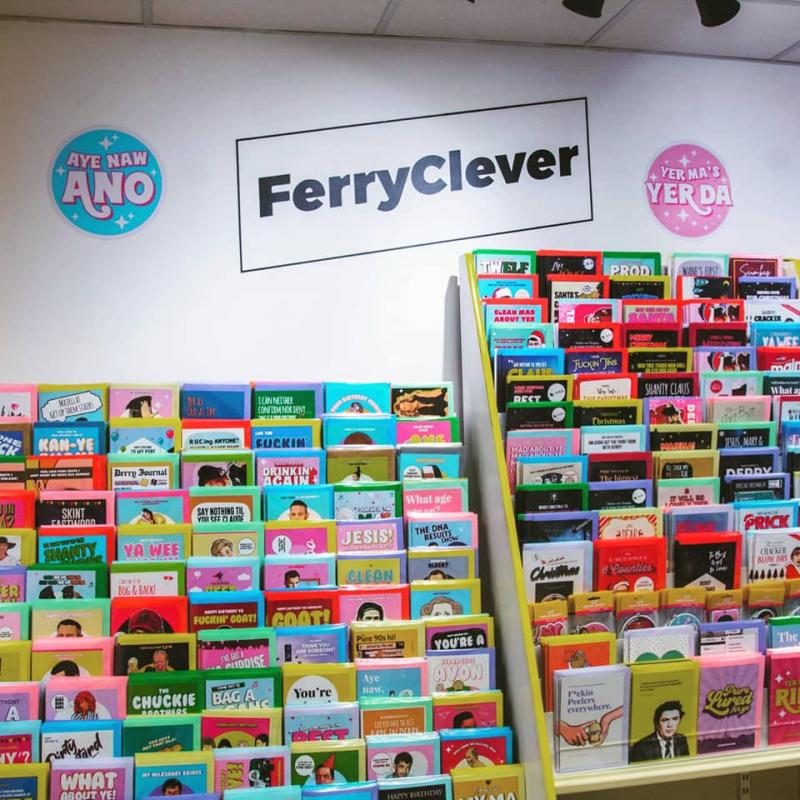 Christopher Ferry, the mastermind behind the online store ‘Ferry Clever,’ has opened his first shop front after lockdown success.
Christopher, a graphic designer for around 15 years, opened his first store on Derry’s Bishop Street last Wednesday.
The Derry native started the business during the first lockdown, around April last year.
He said: “I was a graphic designer in the entertainment industry for loads of different clubs in Belfast, Galway and Dublin but, with COVID, all that stopped.
“I wasn’t making any money, so I knew I had to come up with something to work on for myself. I always wanted to do something for myself. I always wanted to sell my graphic designs as a product.
“I had a sit down and had a think of how I would do that. I came up with the idea that, regardless of what's going on in the world, it's always going to be someone’s birthday, it’s always going to be someone’s anniversary.
“From then, I just made as many cards as I could. I said to myself, they need to do one of two things: either pull at somebody’s heartstrings or make somebody laugh.
“That is still my goal with every card. If I make a card and I don’t think it’ll do either of those things, I just start again.
“The main reason for that goal was because I started this business during COVID and everybody was down in the dumps and really sad.
“I just thought this was a great excuse to try and put a smile on people’s faces.”
Christopher started his business online and initially thought it was a temporary thing. He used Instagram as a tool for marketing and soon gained a large following.
“Everyone was loving the wee videos and content and the cards just started getting more and more popular.
“I always- even way, way back- thought to myself, how I could sell graphic design as a product.
“Then when the cards started coming along, I decided to open a unit. I was scared, it was a big risk, but it’s the same as everything else, like with the cards; if you don’t take the risk, you’ll never know.
“I just went for it then. Everything has happened in such a short space of time. There were lots of other pressures too with opening a shop during these times but it’s going well so far.”
Christopher has already had to restock cards and has plans for other products and Christmas merchandise with the festive season coming up.
Christopher continues to keep his stock in around 18 local businesses too as he says they were always good to him and in Derry, 'local businesses always support local businesses.'
“Loads of wee things came together for me. I feel very blessed and grateful that everything worked out and I’ve landed on my feet.”
You can shop Ferry Clever online or pop down to the new store at 17-21 Bishop Street in Derry.