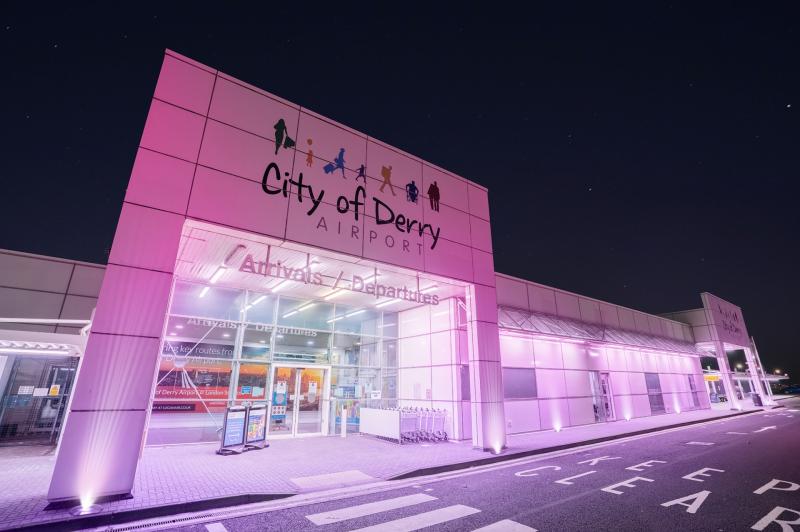 Landmark buildings across Derry and Northern Ireland lit up purple on October 10 for World Mental Health Day and in solidarity with Foyle AMH's campaign “Go Purple for Parity.”

“Go Purple for Parity” is a campaign calling for parity for mental health. Action Mental Health NI are calling on the Government to ensure the Mental Health Strategy will be fully funded & implemented.

Buildings and organisations who lit up purple for the World Mental Health Day and in solidarity with the campaign included the Derry Playhouse, City of Derry airport and Magee Campus.

City of Derry airport tweeted: “As today marks World Mental Health Day, City of Derry Airport is proud to #GoPurple in support of the fantastic work Foyle AMH NI carry out for our local community.”

The public got behind the campaign too, hosting purple themed parties, quizzes, coffee mornings and walking “purple” miles to raise funds for the campaign and AMH.

Data shows that there is 27% less funding for mental health services here in Northern Ireland than England and 20% less than that in Ireland. AMH NI are calling for full funding of the approved mental health strategy to be prioritised.

“I’m asking all parties to include a promise to provide the funding in their manifestos.

“I have written to all Northern Ireland's political party leaders, to ask them to make clear commitments in their manifestoes, to provide full funding for the new Mental Health Strategy and the Protect Life 2 Suicide Prevention Strategy.”

Pauline Flanagan, Project Manager at AMH Foyle urged the public to get involved with the campaign, she tweeted: “Let those with mental ill-health know you are mental health aware and are calling out the underfunding.”