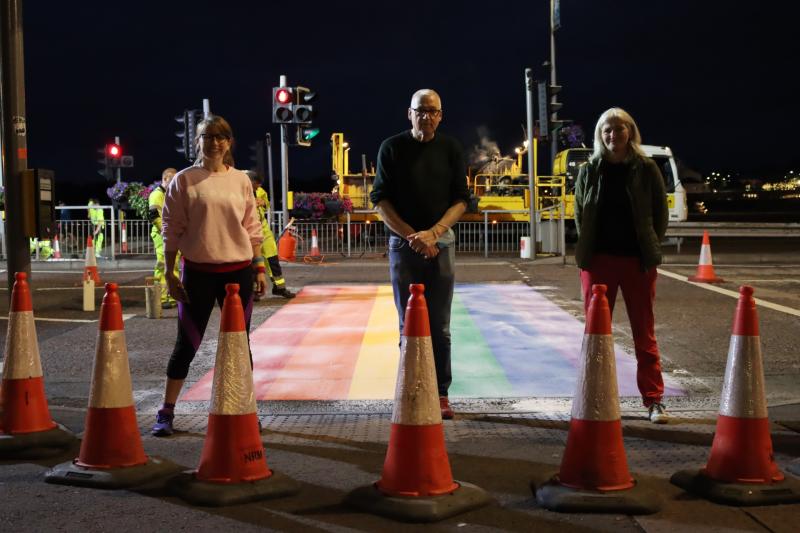 Catherine Hemelryk, Jim Doherty and Shá Gillespie at the installation of the new rainbow crossing in Derry

The rainbow crossing celebrates and shows support for the city's LGBTQ+ community.

The pedestrian crossing, thought to be the first of its kind on the island of Ireland, is located at the dual carriageway that links the Guildhall to the Peace Bridge.

Last year, a temporary version of the rainbow walkway was met with great celebration and has led to the installation of the permanent version.

Jim Doherty, Chairperson of Foyle Pride Committee 2020 said: "Our vision for a permanent rainbow crossing at a prominent position in Derry city centre has been realised.

“We would like to thank the Foyle Pride Committee 2020 for initiating this project and Derry City and Strabane District Council and in particular former Mayor Brian Tierney for making it happen.”

Earlier this year, Derry City and Strabane District councillors unanimously agreed to fund the crossing after an approach from Foyle Pride.

Former 2020/2021 mayor of the city, Brian Tierney, said he was "delighted to see it come to fruition in the heart of our city.”
The money for the crossing came from his mayoral budget.

Catherine Hemelryk, Director of the CCA in Derry said: “We couldn’t have done this without the dedicated support of Councillor Brian Tierney, former Mayor of Derry and Strabane, who supported our campaign from the start.”

Shá Gillespie, founder of the first Pride Parade in 2010 said: "What a beautiful sight, I felt very emotional walking across it, ten years after we had our first Pride parade in the city.

“Visibility like this can save lives of young LGBTQ+ people in our community. I am very proud to have been involved in making this happen alongside Jim, Catherine and Brian.”

Catherine added: “This is such a special place, a place where you can make ideas a reality. Last year I was a member of the Foyle Pride committee and in June 2020 I remember tentatively asking if everyone thought we could make a rainbow crossing happen in the heart of our city.

“I am proud to call this city my home. When I first moved here knowing no-one, I found the LGBTQ+ community instantly welcoming.

"Our city is for everybody and this crossing tells the world that everyone from any background is welcome."