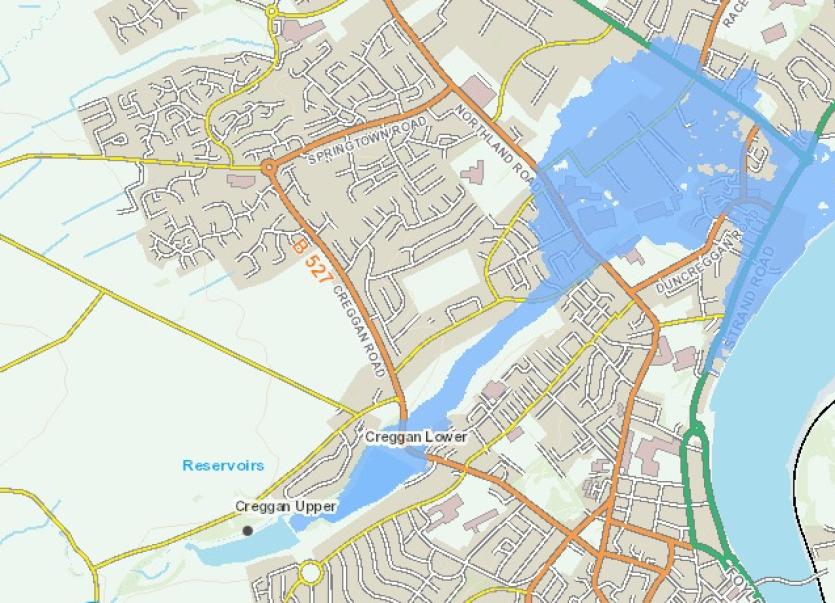 A map has revealed the scale of potential flooding in Derry if there was a ‘structural failure’ at Creggan reservoirs.

It clearly shows that in the event of a breach of the lower reservoir, flood waters would run through the Glen and stretch as far as Buncrana Road and Strand Road.

The issue came to light in recent months after it emerged that major developments at Fort George cannot proceed until reservoir repairs are carried out.

However, it has been known that the reservoirs in Creggan are ‘high risk’ since 2014, according to government records seen by the Derry News.

There are competing proposals for the Fort George site at present including a health hub and an ambitious vision for an international tourist attraction - namely a Maritime and Emigration Museum.

Flood risks have also halted plans to build social housing and a community centre in the Glen area of the city.

The Department for Infrastructure (DfI) has insisted that none of these projects will move forward until remedial works are complete.

How long these works will take is unknown and dependent on prevailing weather conditions, according to DfI.

Within Creggan Country Park there are two controlled reservoirs that were constructed between 1849 and 1880 by the Derry Corporation to supply water to the growing city.

CCPE is responsible for managing the reservoirs.

The site was initially used for trout fishing but now facilitates waterborne recreation.

Conflicting statements from the DfI and DCSDC mean it is unclear exactly when potential delays to Fort George development were first raised.

After lodging an FOI request with DfI Rivers, the Derry News has discovered the extent of the flood risk and a timeline of events. 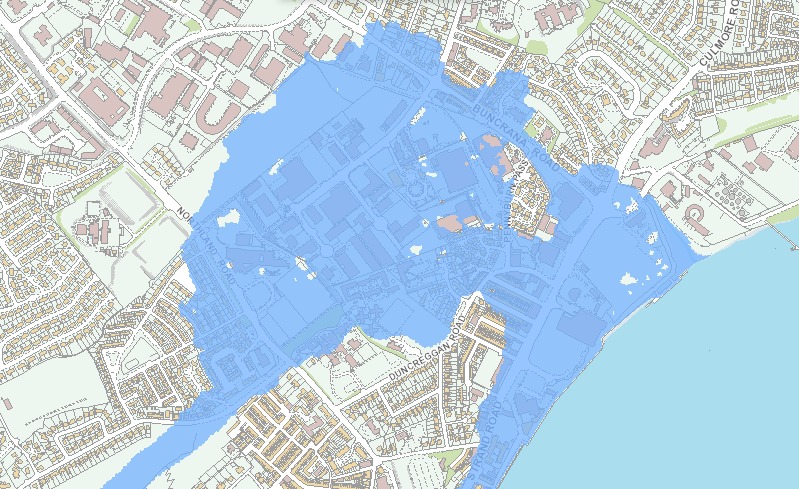 Documents show that revised planning policies were published in 2014 which aim to minimise flood risk to people, property and the environment.

Recommendations take account of climate change and its impact on water levels.

That included a Reservoirs Act to protect flood inundation areas, meaning that assurances about reservoir safety now have to be provided before planning permission is granted.

But powers still have to be transferred from the Department of Agriculture, Environment and Rural Affairs (DAERA) to DfI before a safety regime can be implemented.

In the meantime, under common law, responsibility for reservoir safety rests with reservoir managers – in this case CCPE.

Reservoir managers will continue to be responsible for reservoir safety when the Act is fully commenced.

Reservoir flood inundation maps showing areas that would be affected, including those in Derry, were made available in Spring 2015 and planning authorities were duly informed, the FOI response states.

And according to DfI the issue was raised as early as February 2017 in a consultation response to DCSDC’s planning department.

In the FOI response, DfI Rivers states: “The reservoirs have been inspected by independent Qualified Reservoir Engineers who have made a number of recommendations in relation to the safety and maintenance of the reservoirs.

“As a statutory consultee in the planning process, the Department provides flood risk and drainage advice to Planning Authorities in respect of river, coastal, surface water and reservoir flooding.”

He added: “As part of the planning process, the Department has been consulted in relation to the flood risk associated with the proposed development on the former Fort George site and on a proposed community facility in the Greater Glen area.

“Both sites lie in the inundation area of the Creggan reservoirs.

“In each of these cases the developer has, to date, been unable to provide adequate assurances in relation to reservoir safety to allow the Department to provide a positive consultation response to the Planning Authority.”

But the council itself has said flooding concerns impacting the Glen area were only raised during the processing of the planning application for social housing and a community centre at Creggan Burn Park which was considered by the Planning Committee in July 2018.

A council spokesperson said that risks to Fort George were highlighted two months ago.

She added: “The flood inundation maps were not publicly available and were shown to Council members by Rivers Agency in a presentation to the committee.

“These maps focused on the immediate site/surroundings at Creggan Burn Park and did not cover the area of Fort George in detail.

“During a routine update to Environment & Regeneration Committee in September 2020, members were advised that DfI had raised issues in relation to the impact of the flood inundation zone as part of the processing of a planning application on the Fort George site, which is currently being dealt with by DfI's Strategic Planning Team.”

Nether DfI, the council as owners of the reservoirs or the Department for Communities (DfC) as owners of Fort George were able to put a cost on remediation works, describing the information as ‘commercially sensitive’.

It’s understood that it could cost hundreds of thousands of pounds. 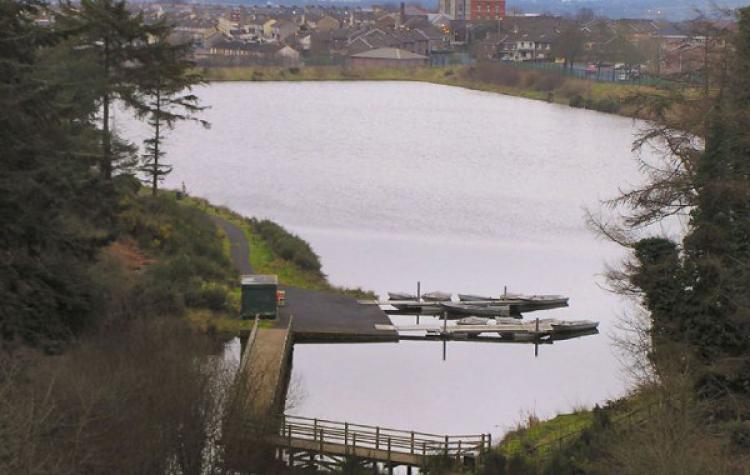 Derry City & Strabane District Council has said that Creggan Country Park Enterprises, as the reservoir manager, is responsible for the maintenance of the reservoirs.

Speaking to the Derry News this week, Gerry Quinn, Manager of Creggan Country Park, said it is a not-for-profit facility and as such does not have the finances to meet the cost.

CCPE took the reservoirs on in good faith for the benefit of the local community, completely unaware that such legislation would be brought in many years down the line.

He believes the reservoirs are safe and during North West flooding in 2017 - which devastated parts of the city - Creggan Reservoirs held out ‘perfectly well’ and water levels rose by about two inches.

In his view it is a ‘paper exercise’ by DfI as experts who inspected it in the past told him the structures are safe and ‘built to last’.

If remedial works are necessary, he added, then resources should be provided to fix the dams because CCPE does not have the wherewithal to pay.

When addressing a Stormont Committee about the Reservoirs Bill in 2014 Mr Quinn said the reservoir was breached by flood in the early 1970s but the water stayed within the site and did not affect property.

Work was carried out in the 1980s and 1990s.  The bottom dam was reinforced with steel piling and a concrete cap and is viewed as ‘the critical one’, he said.

In a worst case scenario, Mr Quinn said, they may have to walk away and hand the site back to the council.

But at the 2014 meeting he was told that CCPE could still be held accountable.

Meanwhile, DfC insists that it will work alongside the council and DfI and any funding cost will be considered moving forward.