Foyle MLA tells the Economy Committee that the city has the highest levels of unemployment, the lowest wages, the lowest economic rate and worst child poverty 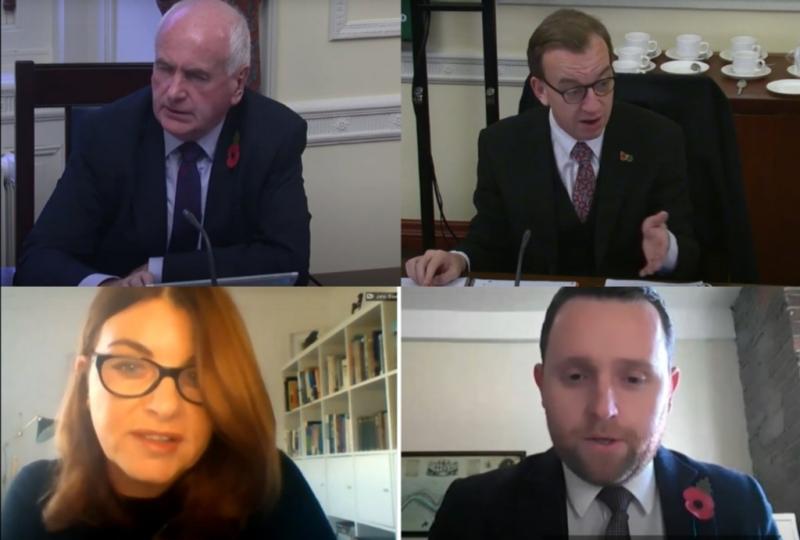 DUP MLAs have dismissed comments that Derry City suffers from regional inequality while insisting that Belfast is the country’s ‘economic engine’.

Figures show that Derry City and Strabane accounts for five of the top ten most deprived areas in the country in a list totalling 890.

Director of Women and Children’s Service at the Western Trust, Deirdre Mahon, recently told a board meeting that one in four families within the Western Trust area experience poverty linked to higher and lasting levels of unemployment and low wages.

Derry City also has the highest percentage of children entitled to free school meals at 43.3 per cent compared to a Northern Ireland average of 30.7 per cent, she said.

At a meeting of Stormont’s Economy Committee yesterday, reference was made to the Economic Advisory Group (EAG) which had been asked to provide its ‘terms of reference’.

The EAG is tasked with creating a ‘more competitive, inclusive and greener economy’ in Northern Ireland.

The group, comprised of experts on the economy, business and skills are in place to provide independent advice to the Economy Minister aimed at challenging and developing public policy and strategic thinking on the Northern Ireland and UK economy.

Speaking at the meeting, Sinn Féin MLA John O’Dowd said it is ‘deeply disappointing’ that the trade union movement was not represented on the EAG as it’s ‘extremely important’ that their voices are heard.

He also raised concerns that there is no recognition of regional disparity.

“While such a body is a welcome idea, it’s important it has the right membership and right strategy.”

Foyle MLA Sinead McLaughlin echoed those comments, saying: ”I’m really disappointed that there is no reference to sub-regional development.

“I can’t believe it.  Do they not understand that there is a disparity within Northern Ireland.  It’s absolutely unacceptable that it wouldn’t be in the terms of reference.”

She said DUP Minister Diane Dodds needs to be asked why those points are absent.

DUP MLA for North Down, Gordon Dunne, took exception to the issue of ‘inequality’ being raised at the Economy Committee.

He said: “Surely the policy applies equally across Northern Ireland.

“You know, I don’t get this thing about inequality.  It’s continuously raised within this committee.

“I don’t see in my constituency that we have anything more or less than any other constituency.

He added: “But continuously this is raised and I think we’re getting a bit tired of it.  This thing about disparity in areas.

“We can see the ongoing investment in areas like Londonderry, and they need it, there’s new roads going in, there’s a new university going in, and yet this goes on, and on, and on.

“I think it needs to stop and the province needs to be looked at holistically and the policy needs to apply equally and fairly.  And I believe that’s what the Minister is intending to do.”

Addressing those remarks, the Derry MLA said Mr Dunne ‘has to realise that Co Down is not the same as Derry City’.

SDLP representative Sinead McLaughlin continued: “We have the highest levels of unemployment, the lowest wages, the lowest economic rate, the worst child poverty and there is a difference.

“We need to make sure that we address the regional imbalances and it hasn’t been done for decades.

“You can’t roll out something and say that it applies equally because if it did Derry wouldn’t be in the circumstances that it has been for decades.  It hasn’t been applied equally and it needs to be.

“We have to make sure we have it in all of our strategies going forward to address regional imbalances. It’s gone on for too long and it needs to stop.”

Mr O’Dowd added that North Down is the most affluent constituency in Northern Ireland while accepting it does have pockets of deprivation.

He said there are large pockets of deprivation in Foyle and his own constituency of Upper Bann and if you tackle that there are long-term benefits.

DUP representative Christopher Stalford said he represents South Belfast and there is a misconception, like North Down, that it is affluent.

“What I would say to my colleague from Foyle is, whilst the road may be going from Belfast to Londonderry, it’s also going from Londonderry to Belfast.

“Belfast is the economic engine that drives this entire region, and Gordon is right, at this committee there has been repeated anti-Belfast viewpoint expressed.

He continued: “There is no deliberate governmental oversight to ignore any part of Northern Ireland and it is disingenuous to suggest otherwise.

“This idea that any area is treated advantageously over another is simply not true.”

DUP MLA for Foyle, Gary Middleton, said it is right for MLAs to speak up for their constituency, but, ‘to do so at the relevant times’.

He believes it is ‘unfair’ to criticise the EAG before they have completed their work.

“Let’s be honest, nationalist parties have had the domination of this city for a long, long time and we know how they have handled the situation.

“And we need to ensure that rather than pointing fingers, and trying to lay the blame on individuals, I think that political parties with the responsibility, with the majority of positions in the relevant elected chambers, they use those in a productive way to try and get results rather than simply trying to point score as we go forward.”