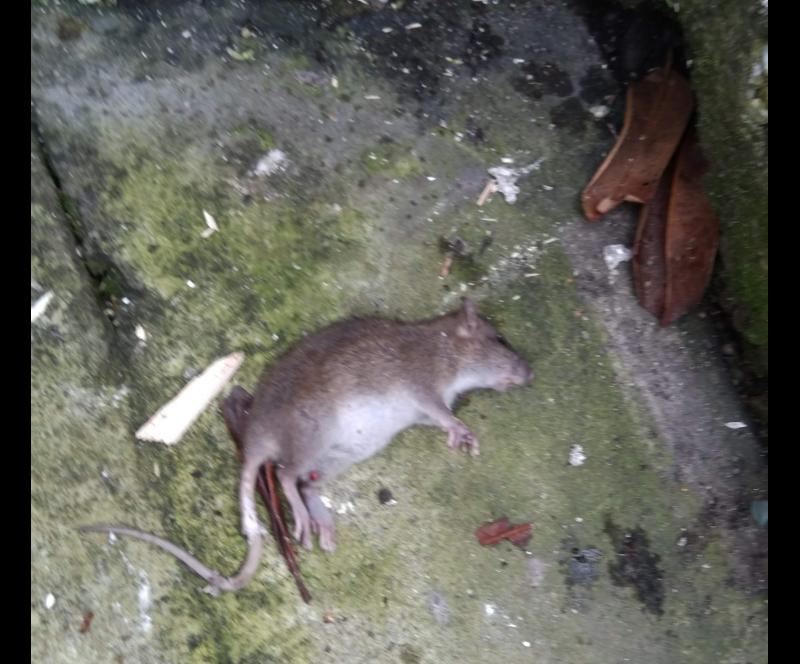 People living in the Bogside area of the city have called on the relevant government agencies to urgently deal with an historical rodent infestation.

The problem is believed to emanate from the sewerage system and the rats have been concentrated, but not limited to, the streets behind Meenan Square.

However, when asked if it plans to address the issue NI Water said work has been completed and pointed to ‘BBQ’s and rubbish in the street’ as the source of the problem.

Drumcliff Avenue resident Damien Robinson said that in recent months he was in the kitchen at night time when he encountered a rat.

He attempted to hit the pest with a brush but it escaped.

“We set down traps and poison before and didn’t have much issue but a lot of residents are having a lot of bother with them over the past couple of weeks,” he explained.

“A neighbour a couple of doors down had a big one in their kitchen the other night.

“And a person in behind me had two big ones in the back yard last night.

“Nearly everybody in the streets around here have seen rats in their back yards at some stage.

“I think it’s the sewerage system and food bins attracting them in.

“This is a big issue for people around here and we’ve all become more aware, people are making sure their doors are closed.

“They bring diseases with them and we don’t want to see children or anyone else getting sick.”

He said a neighbour sat poison on two blocks of wood and rats pulled the wood around the back yard.

Others are eating the poison and walking around ‘disorientated’, he added.

North West Pest Control confirmed that it has carried out work for home owners in and around the Bogside.

A spokesperson for the local company said: “There's an ongoing problem within the Bogside area regarding rodent ingress into people's homes and has been ongoing for many years.

“This is an historical issue and unfortunately has to do with faults within the sewerage systems.”

Councillor for the Moor area, Gary Donnelly, said he has been contacted by residents who are at the ‘end of their tether’.

“This is a recurring problem now for a number of years. The effect this is having on residents is detrimental, it is having a huge effect on family life and in some previous cases residents have been forced to move home.

“NIHE have been contacted and in recent days pest control have baited the area with poison.

“It’s time those with statutory obligation take this problem seriously and come up with an action plan,” he added.

Cllr Logue said: “We have taken forward a few initiatives to assess the infrastructure leading into some of the houses and a number of defects were found and repaired.

“However there is an ongoing issue in a number of areas, not just in Derry, because restaurants were closed and there was a lack of food in the city centre, rats were moving into urban areas to source food.
“I’m aware too that there’s private owners who need to be doing a bit of work to their property and I believe that is ongoing.

“While the issue seemed to subside as work was completed, it seems to have reared its head again.

“The multi-agency group is meeting next week again and we’ll be discussing this and how we can address it collectively.

Residents can also help alleviate the problem, Cllr Logue said, by not leaving food out, keeping back yards tidy to avoid creating hiding places for vermin and cleaning up after their dogs as rats will eat dog foul too.

Karen Mullan has now invited the Department for Infrastructure Minister, Nichola Mallon, to the Bogside to witness the effect it is having on local residents.

A spokesperson for NI Water said that, as part of agreed actions, NI Water have carried out CCTV surveys, desilting and repairs of defects in the sewers within the Bogside to seal all access for rodents to its sewer network.

“This work is now complete and a recent report from Bluebellhill Gardens has been investigated also. It is important to note, there was no evidence of rodent activity in the sewers.

“Rats/rodents live mainly in the natural environment and staff did notice nearby construction work which can sometimes disturb rats and mice.

“They also witnessed BBQs and rubbish in the street which also encourages rodent activity.

“As NI Water do not have responsibility for rat baiting, there is unfortunately no more we can do,” she concluded.