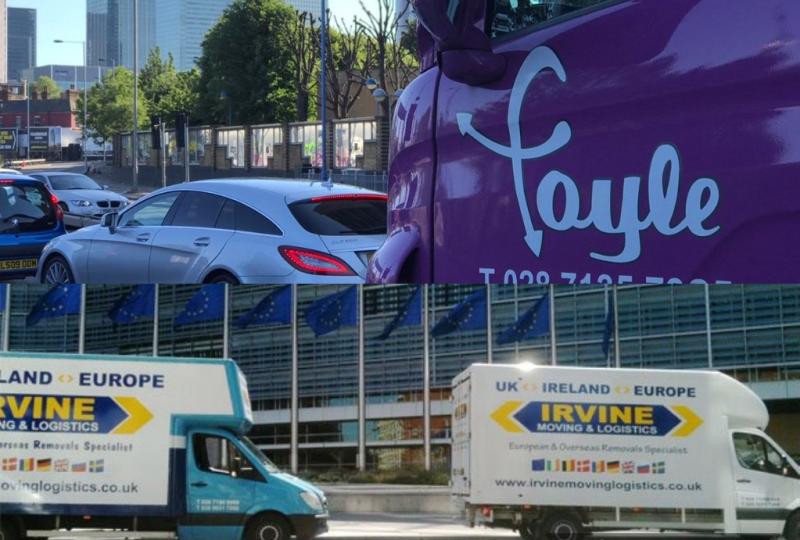 Local removal firms are reporting significant increases in customers returning from England to live in Derry due to safety fears ahead of a predicted second wave of Coronavirus.

Two companies based in the city have told the Derry News that the primary cause for concern amongst customers is the virus but also the impact of Brexit.

Irvine Moving Solutions has been operational for over 45 years and specialises in international removals.

They have relocated schools and colleges, moved homes all over Europe and government employees to European Parliament in Brussels, London, Dublin and Belfast.

Director, Kevin Irvine, said there has been a 200 per cent rise in people leaving England, particularly the south in areas like London.

On average ten families a week are returning from England, he added.

They’ve moved people back to Derry, Donegal, Belfast, as well as Limerick, Cork, Galway and Dublin.

Reasons are mixed but ‘most’ are saying it’s because of the Coronavirus pandemic and the high death rate with people feeling that the British government mishandled the crisis.

“People believe it would be better to return home.  Other customers are from England who are moving to Donegal because they believe it’s a better way of life.

“We’ve also done a couple of big moves from America, places like Texas and Minnesota, and Canada.

"There are retirees moving back to Donegal.  They made the decision around March because they didn’t like the way the US was dealing with it too.

“Everybody is coming out with the same answer.”

He continued: “Some of these people have been away for over 25 years.

“That is also kickstarting the housing market too with cash buyers coming back.”

Middle aged couples are relocating, he said, because of the difference in terms of cost of living and childcare.

The Campsie based company is a well-known local and International mover and storer.

He said the removal market between the UK and Ireland has been ‘very busy’ since the UK housing market was reopened again in early June.

Mr McGowan commented: “We have experienced a high demand for our service.

“We offer an already weekly UK/London service and every customer we’ve spoken to recently says they are worried about two main issues and want moved ASAP to be resettled.

“The main concern is a second wave of the awful pandemic.

“The other major concern of people contacting us is now that the UK has left the EU can we still move them for example a cross the border or other European destinations, the answer is yes as we have all our national and international operators licences in place to have your home, office or business moved across the Border or across Ireland UK or Europe.

“We have done all we can and hope all governments in London, Dublin and Europe do all they can to support Businesses and people.”

The company has sought to allay any customer concerns and assured them that staff have taken every precautionary measure, including the use of responsibly sourced PPE.

Customers are either not present during the move or leave instructions or simply stay in a safe area out of the way.

Vehicles are also sanitised after each move and on a weekly basis deep cleaned for customer peace of mind.