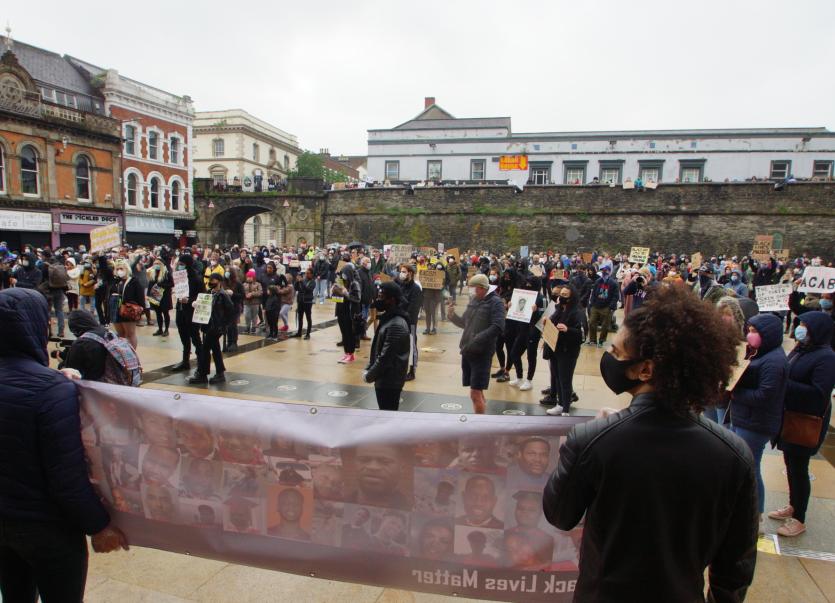 Some of the crowd who gathered at Guildhall Square on Saturday.

The last-minute introduction of fines against peaceful Black Lives Matter protests in Northern Ireland over the weekend is “unacceptable”, Amnesty International UK and the Committee on the Administration of Justice said today.

The human rights organisations have raised concerns that enforcement powers used by the PSNI as the legal basis for penalties only came into force at 11pm on Friday night, just hours ahead of Saturday’s Black Lives Matter protests which resulted in scores of participants receiving fines and organisers facing prosecution.

“As human rights organisations, we recognise the complexities of the current situation, balancing the right to protest and the need to protect public health.

“But even in times of emergency, law enforcement officials may only use means that is necessary and proportionate to achieve a legitimate objective.

“The Prime Minister Boris Johnson has tweeted that ‘People have a right to protest peacefully and while observing social distancing’, yet people in Northern Ireland are being fined and face prosecution for doing just that. The fines should be voided and allegations of racial profiling in the issue of such fines must be examined.”

Brian Gormally, Director of CAJ, said: “We have serious concerns both about the confused and unsatisfactory nature of emergency legislation in Northern Ireland and the policing operations over the past weekend in response to the Black Lives Matter protests.

“The regulations here do not address the right to protest and instead the PSNI is relying on powers designed to restrict social gatherings that only became enforceable the night before the protest.

“The enforcement powers themselves are so vaguely drafted that they are reminiscent of the notorious Special Powers Acts.

“We urgently require clarity from the Executive and PSNI to ensure that the regulations expressly uphold the right to protest in an effective and safe manner.”

The right to protest is a fundamental human right, which may be limited in a public health emergency, but limitations must be proportionate, meet the test of ‘legal certainty’ – this is, the rules must be clear - and not be enforced in an arbitrary or discriminatory manner.

The ‘The Health Protection (Coronavirus, Restrictions) Regulations (Northern Ireland) 2020’ have now been amended five times but neither the exemptions to the ‘Stay at home’ regulation 5 or the ‘restrictions on gatherings’ regulations (6-6A) expressly consider protests.

The PSNI have relied on Regulation 6A – designed to restrict outdoor social gatherings to up to six persons. Notably this came into force on the 19th of May but there were no enforcement powers attached to it. That changed as an amendment was put before the NI Assembly at 5pm last Friday and came into force at 11pm on Friday night, the night before the anti-racism protests [1].