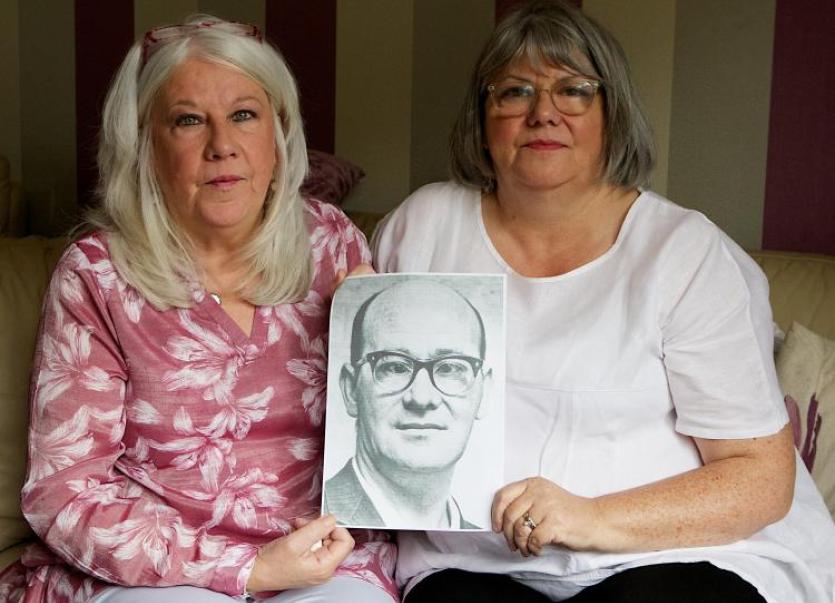 Christine and Collette, daughters of Sammy Devenny, ahead of his 50th anniversary last year

Derry representatives have denounced the British government’s ‘continued and deliberate’ obstruction of the Devenny family’s pursuit of justice and again called on it to release case files.

Sammy Devenny’s file should have been released on completion in 1970.

Then, under the thirty year rule his files were to be made accessible from the national archive in 2000 but they weren’t.

The Pat Finucane Centre requested a number of files relating to Mr Devenny’s death in 2014 but were told they had been reclassified by the Met Police and would not be considered for release until 2022.

He was the second victim of the Troubles in Northern Ireland, the first in Derry City.

The family of Mr Devenny say that the British government’s handling of their father’s case in many ways set the blueprint for all subsequent cases in terms of denial and obfuscation.

Speaking to the Derry News, he said: “Continued obstruction from successive British governments has been going on now for over half a century.

“There is no doubt that this is done to protect and cover up the activities of the British police in Northern Ireland.

“It is deliberate obstruction of the Devenny family’s quest for truth regarding the death of their father, an entirely innocent man who was attacked in his own home.

“The family are entitled to know the truth of what happened to their father.

“Their position is that they don’t want prosecutions, they want to know the truth behind what happened to their father.

“I commend the family in their dignified position and again pay tribute to them.”

In March the British Government and Secretary of State for NI Brandon Lewis set out a new approach to dealing with the legacy of the past in Northern Ireland.

It said a new independent body will only consider those cases where there is ‘new compelling evidence and a realistic prospect of a prosecution’.

“Once cases have been considered there will be a legal bar on any future investigation occurring. This will end the cycle of reinvestigations for the families of victims and veterans alike,” the British government stated.

It went on to defend army veterans by saying that the new proposals would ‘put an end to repeated reinvestigations where there is no new compelling evidence and deliver on our promise to protect veterans from vexatious claims.’

“This new approach seeks to put victims first with information recovery and reconciliation as the overarching goal - with a way forward that delivers for all those affected by the legacy of the Troubles and enables all sides of the community to continue to reconcile and prosper."

Details of these proposals are under consultation and nothing has been published.

Foyle MP and SDLP leader Colum Eastwood said the Devenny family have been put ‘through the mill’ for decades with ‘no truth, no answers and no proper investigation’.

It is a case, along with others, that has been raised with successive British governments, he said.

“The Devenny family were first faced by the Stormont government and now the Met Police who don’t seem to have any interest in allowing the family to have the truth and justice they require and deserve.”

He said in the Devenny case, and countless others, the British government has inexplicably closed the files.

The fact the British government has gone to such lengths demonstrates that it ‘doesn’t want the truth to come out’ which is a ‘fundamental mistake’ for a society that is trying to move on.

“The British government’s approach to legacy has been disgraceful, they signed up to the Stormont House Agreement, which is an international agreement with the Irish government and parties in NI.

“We have some issues with it but it was agreed and is an international treaty, yet the British government has a consultation out which sets about unpicking that,” the Foyle MP explained.

“That whole approach is about satisfying some people on the back benches of the Tory party - it has nothing to do with the needs of victims and survivors.

“The whole point of dealing with the past is that it allows us to look to the future where we have dealt with that legacy and it isn’t constantly dragging us back.

“Where justice is achievable, it should be seen to happen, but where it isn’t achievable people should be entitled to the truth and that has all been previously agreed.”

He added that people ‘don’t expect any different from the British government’ but now it ‘thinks it can go off on its own’ without the consent of the Irish government nor political parties in the North.

In his role as an MP, Colum Eastwood said he will continue to make the case ‘very strongly and loudly’ for the files to be released.

Meanwhile, People Before Profit councillor and civil rights activist Eamonn McCann said there is no way of knowing whether Mr Devenny’s case meets the British government’s criteria for legacy cases because of its own secrecy.

“The truth turns into a puff of air when we begin to investigate the Troubles and look for the truth about the security force’s role,” he said.

At the time Mr Devenny was viciously assaulted there had been civil rights marches and rioting in the city but Cllr McCann said the attack marked a ‘significant escalation’ in violence, not only because it led to his death, but because a totally innocent man was beaten with batons in his own home.

“That is what shocked and distressed people, it was common to have riots and people had a sense of safety in their own home but that was violated.  The location of it was as bad as the perpetration of it,” he added.

The idea that the Met Police wrote ‘unsolved murder’ in error, he said, fits into an entire pattern over years by the British government of ‘avoidance, denial and systematically sewing confusion’.

“They knew it, they have all the papers filed away and they still won’t admit it.  These people are systematic liars.

“They just won’t admit their activities here in the North.”