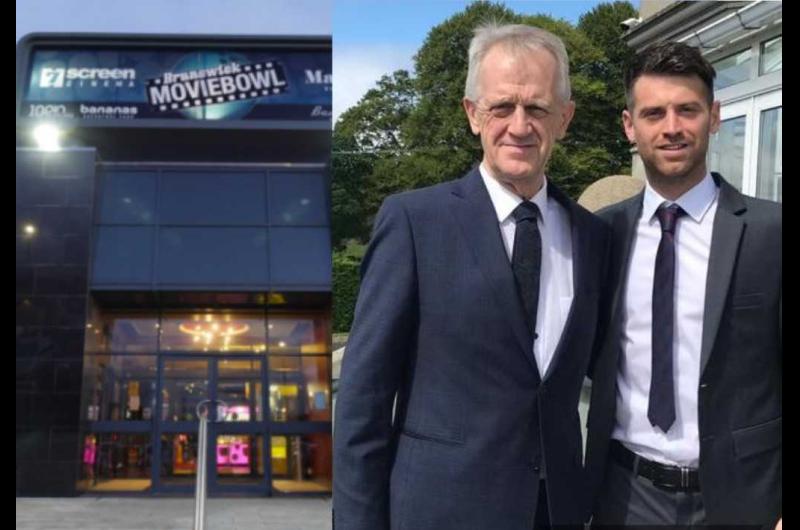 The owner of Brunswick Moviebowl in Derry believes the current government furlough scheme must be tailored as businesses reopen and adapt to the so-called ‘new normal’ of social distancing.

With the British government’s £40bn job-retention scheme running until the end of June, Mr Simpson has said financial support must be ‘tapered’ as businesses begin to reopen at reduced capacity so they can afford to pay staff.

Under the scheme - known as furloughing - the government covers 80% of the wages of workers who are staying at home during the coronavirus pandemic and not working at all, up to a cap of £2,500 a month.

The Moviebowl houses a cinema, restaurant/bar, bowling alley, café and children’s adventure playpark amongst other attractions.

Mr Simpson employs around 350 staff - 195 in Derry - who have been furloughed during the crisis.

At the weekend, Taoiseach Leo Varadkar announced the Irish government’s roadmap to reopen society and business.

The NI Executive is expected to outline its own pathway out of lockdown in the coming days.

Once businesses reopen it will be on the basis of reduced capacity and strictly adhering to social distancing guidelines.

In line with that guidance, staff will also return to work in fewer numbers.

Staff and customer safety is a matter of utmost importance, Mr Simpson said.

When the coronavirus first emerged bars in Derry led the way by announcing closures on March 15, including The Blackbird, Paedar O’Donnell’s and the Gweedore.

The following day Brunswick Moviebowl decided to close its doors while encouraging its employees to use the time wisely to look after the most vulnerable during the pandemic.

Brave decisions made by local businesses at that time have been widely praised and are believed to have saved lives.

It was not until a full week later, March 23, that the British government officially ordered businesses to close under law.

Mr Simpson said that with all the uncertainty at the time it was a ‘tough’ decision to make but he knew it was the right one.

“It was tough, but people were ahead of the government because they just weren’t coming out at that stage.

“It feels like a year ago already,” he said.

Initially, the company had to pay staff but the announcement of a furlough scheme came as a relief.

“We didn’t know how long it was going to go on.  The big worry was how we were going to pay staff, everybody has bills.

“But in fairness the furloughing scheme has been brilliant, that can’t be denied.  And that took a lot of the pressure off.”

The Irish government’s roadmap for reopening society and business sets out five phases with the first beginning on May 18 and the last on August 10.

The Irish government’s plan states that cafés and restaurants providing on-premises food and beverages can re-open at phase 3, June 29.

They must comply with social distancing and strict cleaning protocols.

Indoor recreational venues are set to reopen on August 10, where numbers can be limited, cleaning can be maintained, and social distancing can be complied with.

The final phase is the one that is most applicable to Mr Simpson and Brunswick Moviebowl as that is when pubs, bowling alleys and cinemas can reopen in the south.

Mr Simpson has welcomed the Irish government proposals saying ‘it looks fair enough’ and shows ‘light at the end of the tunnel’.

“The biggest worry will be how they (the British government) end the furlough.  If they suddenly say you can open on the 10th of August and everybody is off furloughed: with social distancing and other measures you’ll not be fit to bring back all the staff at the one time.”

The Irish Government described its plan as a ‘phased flexible roadmap’ and said it has a ‘clear way of deciding’ when it can move from one phase of reopening to the next’ with a focus on minimising the number of people who get the infection, and the number of deaths as a result.

In terms of that timeline, Mr Simpson said it will be a ‘numbers game’ and it will depend on how the numbers look at the time.

“I think it could end up moving either way, backwards or forward,” he added.

There are concerns amongst restauranteurs that reopening with half the number of customers would not be profitable.

Asked if that was a concern for the Moviebowl and if he envisages opening different parts of the building at different times, Mr Simpson said: “No, I think we would manage that.”

He expects that once permitted to do so, the facility will open in its entirety with the exception of the Bananas Adventure Park as it would be impossible to ensure social distancing amongst young children.

Mr Simpson is hopeful that the NI Executive will lay out its own roadmap soon as ‘everybody needs a bit of guidance’.

“The biggest worry is looking after your staff and customers, and furloughing can’t just stop on a particular date because businesses won’t open up with the same number of staff until things go back to normal.

“The furlough scheme needs to be tapered in some way so that it carries on.

“We have 195 staff in Derry and you’re probably going to be opening with 70 or 80.  And over the weeks and months you’d be taking them back gradually.”

He concluded: “The Moviebowl will start out with reduced capacity and we’ll have to see how it goes from there.”