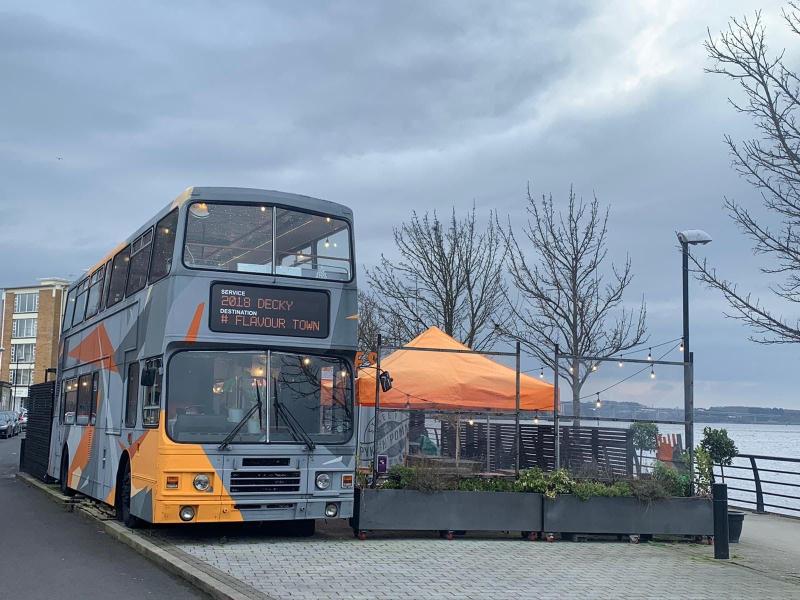 Derry foodies are overjoyed at the return of Pyke 'n' Pommes

One of Derry's most popular food outlets has reopened for takeaways today, much to the delight of its customers.

Pyke 'n' Pommes has implemented a number of practices to keep both staff and customers safe at its branch on Derry's Quay.
The chain's Strand Road restaurant closed its doors on March 16 and trialled a delivery service.
But less than a week later the decision was taken to close both the restaurant and the pod on the river front.
However, almost a month on, owner Kevin Pyke has decided to reopen the branch on the Quay for takeaway and collection only, with their outside terrace and double decker bus seating areas to remain closed.
In a Facebook Live video Mr Pyke said the business was reopening from Wednesdays through to Sundays and would be taking a number of measures to ensure the safety of both staff and customers.
All staff will be wearing gloves and regularly sanitising their work space and markers will be in place to help people queue two metres apart.
"We made the decision, it wasn't the easiest decision, but we decided to reopen that we were going to try opening up down the river front for a few days in the week," he said.
In the video Mr Pyke explained customers can order and pay over the phone, and leave their car registration so the food can be delivered to their vehicle.
Customers can also order at the pod where they will have the option to pay contactlessly and a queue system that allows for social distancing will be in place.
"This is a new thing for us, we are just trying this to see if it works. I think Derry deserves a Legenderry burger," said Mr Pyke.
He added it was important people did not  congregate around the premises and suggested customers could take a short walk down the Quay while their food was being prepared.
Pyke 'n' Pommes at the riverfront will be open for food orders on Wednesdays, Thursdays and Sundays from 12pm-9pm and on Fridays and Saturdays from 12pm to 10pm.
To place an order telephone  07743892108 or 07511277955.
--