'The agreed New Decade Programme for Government commits Stormont to major university expansion in Derry - but not Belfast.' 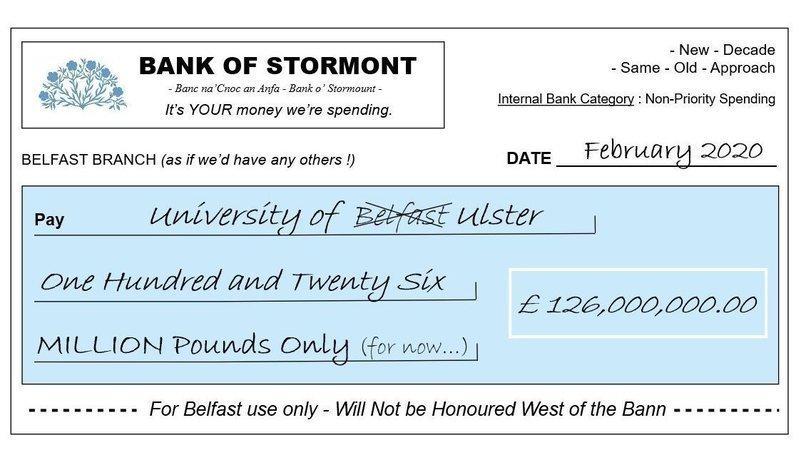 An online petition has been launched calling on Stormont to refuse a £126m bailout of Ulster University's Belfast campus until Derry's Magee campus is expanded.

It comes after news emerged that Magee university expansion has been delayed indefinitely because its business case is "out-of-date" and “new money” must now be found to deliver on promises laid out in the New Decade New Approach document.

The document outlining commitments from the British and Irish governments, states: "The Executive will expand university provision at Magee in line with commitments made by the previous Executive (10,000 student places), including through the establishment of a Graduate Entry Medical School."

Last week, Heather Cousins from the Department for the Economy (DfE) was questioned about problems with the Belfast campus by MLAs on Stormont's Economy Committee.

Evidence provided by the senior departmental official to the committee revealed the full extent of “difficulties” facing Ulster University (UU) in the development of its Belfast campus.  UU has requested a loan of £126m from DfE to complete the build of the Belfast campus.

She also categorically affirmed that Magee's “very out-of-date” business case for expansion amounted to £300m in capital funding and £100m resource “that we just do not have and unless there’s new money it’s hard to see how that will happen because when there is new money it goes to health and schools."

Despite being NI’s second city, there are currently only 4,300 students in Derry – whilst Belfast has over 40,000 across two universities.

Northern Ireland has a shortage of university places, with a third of all students leaving annually to study - most never returning to live in NI.

In its petition, the Derry University Group has demanded that Stormont refuse any bailout loan for Ulster University, unless and until the following 5 conditions are met:

1) UU provide a detailed, credible and binding business case for how and when it will expand capacity in Derry to 10,000 full-time student places – with a deadline for complete delivery by 2030.

2) UU provide a legal charge over its Magee campus to the NI government as collateral for any loan.

4) If UU are unable to repay the loan in full on that date, Magee campus will be legally transferred to the NI Government for the creation of a new independent University in Derry. Any difference between the value of the site and the amount due from UU will still remain outstanding.

5) If UU are unwilling to agree to these terms for the £126m loan, funding should only be provided to them in return for the sale of Magee to enable the establishment of an independent university in Derry. Because it is clear that their overwhelming priority is Belfast, and not Derry.

It adds, the agreed ‘New Decade’ Programme for Government commits Stormont to major university expansion in Derry - but not Belfast.

"There is no agreed basis on which Stormont can fund the latter but not the former. There must therefore be no unconditional State bailout for Ulster University, and no loan unless UU delivers on Stormont’s agreed objective of major University expansion for Derry."

The petition can be found at: https://www.change.org/p/ni-assembly-no-126m-bailout-for-ulster-university-without-magee-expansion