Issues raised centred around the top section of Brooke Park which includes the leisure centre, 3G and grass pitches and parking facilities 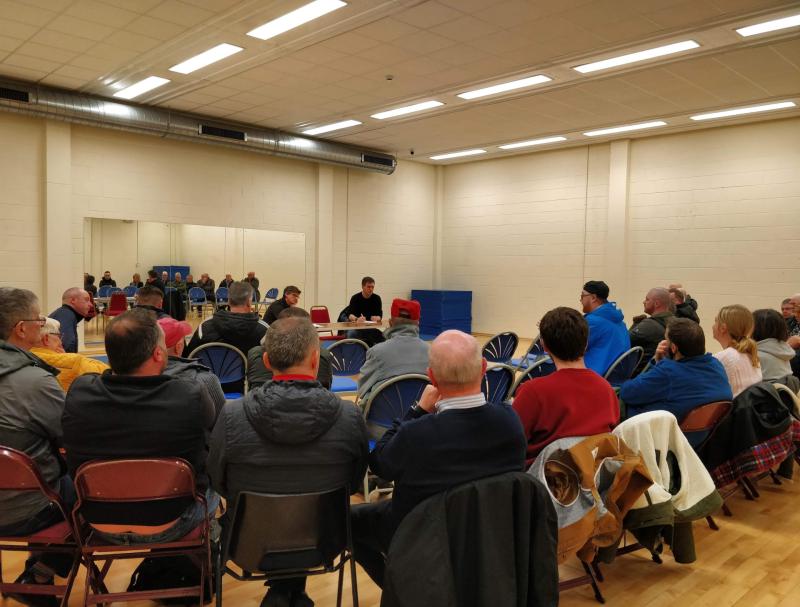 Some of those who attended today's meeting.

Users of Brooke Park this week raised a range of concerns about a lack of facilities and urged the council to be more transparent about future plans for the leisure centre.

It was chaired by People Before Profit councillor Shaun Harkin and council officials were on hand to provide a response to any queries.  Independent councillors Gary Donnelly and Sean Carr were in attendance as well as SDLP Councillor Mary Durkan.

Mr Harkin began by saying that Derry City & Strabane District Council must be more “transparent” about its plans for the site as there had been rumours circulating that the old leisure centre may be demolished to make way for parking facilities.

Dalton Kehoe, of Rosemount Resource Centre, said speculation had emerged that a new centre may be built at the old Foyleville Day centre.

Issues verbalised at the meeting centred around the top section of Brooke Park which includes the leisure centre, 3G and grass pitches and parking facilities.

They included the need for additional changing facilities for the outdoor pitches, proper maintenance of those pitches, the need for new equipment in the gym and the possibility of reduced prices for community groups.

The prospect of increased opening hours to bring the park in line with tier one facilities such as Templemore Sports Complex and Foyle Arena was also to council officials.

Rosemount residents also highlighted concerns around excessive dog fouling in the park and the need to fine those responsible.

A recent letter from football coach, Paul Roddy, fast-tracked the meeting which had originally been scheduled last October but was pushed back due to Westminster elections.

Speaking at the meeting, Head of Community Development at Derry City & Strabane District Council Barry O’Hagan recognised that errors have been made in the past and that Brooke Park Leisure Centre should have been consolidated on one site.

He added that to increase opening hours, to purchase extra equipment and offer concessions for youth groups would have to be paid for somehow, and would likely lead to increased rates.

Mr O’Hagan went on to say that he and other council officials are happy to speak to community groups to take on board their grievances.  He made it clear that no decision has been made to close the old leisure centre but recognised that upgrades are required.

Mr Roddy said that groups which have used the facilities for years have been left out in the cold.  He said the standard of facilities in Derry wouldn’t be accepted in Belfast or Magherafelt where his team recently played.  “They would laugh at us, it’s ridiculous.”

He believes that the grass pitch should be at intermediate standard with dug outs and a standing area for supporters and suggested that council needs to be more pro-active in terms of development.

One service user said that people have left Brooke Park to train elsewhere because of the reduced weekend opening hours.  He had asked about the possibility of Brooke Park opening earlier and was ignored, but he said when Templemore temporarily closed, its users were accommodated at Brooke Park and it opened earlier.

Cllr Donnelly said that was unacceptable and suggested a proposal could be brought before the council to bring opening times at tier two facilities in line with tier one centres.

It was agreed that a motion could be brought before the council about Brooke Park facilities but that the community must be fully consulted beforehand with another public meeting organised shortly to allow more people to have their say.