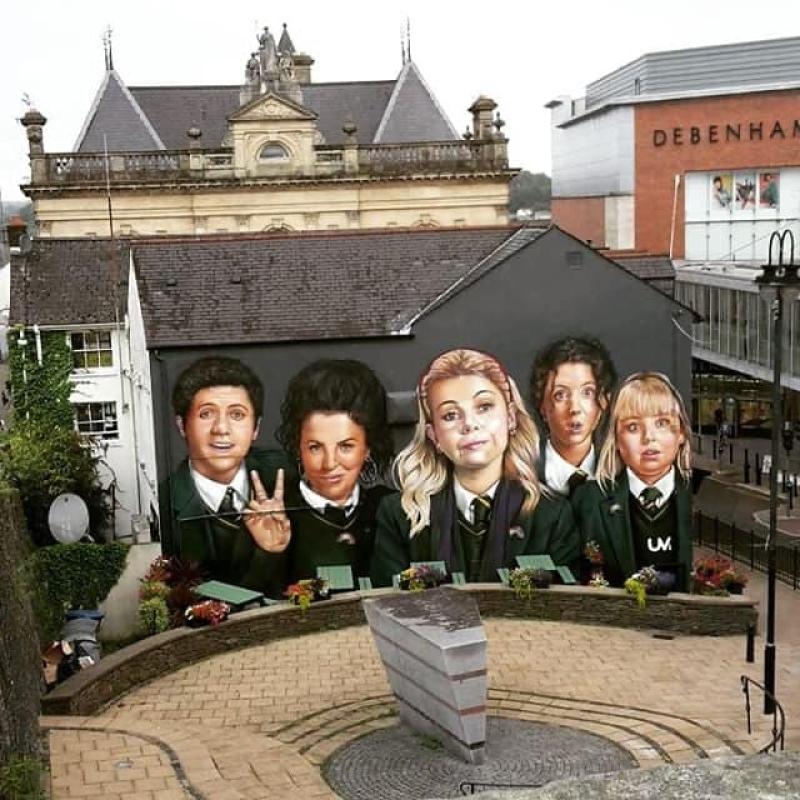 A DUP councillor has expressed “anger and disappointment” after he and his young family were attacked with a glass bottle in Derry city centre.
Derry City and Strabane District Alderman Graham Warke just had the “best night ever” at the Millennium Forum pantomime with his family. He decided to take a photo with his four children in front of the Derry Girls mural on Orchard street when a bottle was thrown from the City Walls which smashed right beside them.
Alderman Warke explained: “It was so, so close. The wains were absolutely terrified. I felt the glass hit my legs and it hit my partner’s hand. I got them straight to the car and out of the way.
“If it had landed a couple of inches either way one of the children could have been severely hurt.”
It followed what was a wonderful festive evening at the pantomime: “We had the children at the Millennium Forum watching Snow White & Seven Dwarfs last night, getting into the Christmas spirit. The kids clapping their hands, laughing and having a ball. Making memories.
“On the way home after the show we got a picture of the kids at the Derry Girls mural and some 'rocket' decides to throw a bottle at us from Derry Walls. Nearly hitting the children and glass going over everyone. Honestly l couldn’t be more angry and disappointed.
“We were very lucky. This is extremely dangerous and reckless behaviour. I want to live in a City where you feel safe.
“I hope whoever did this thinks of his actions today and realises they could have seriously injured young children. Londonderry or whatever you want to call this place doesn’t matter.
“It’s a place we all call home and love. We want it to be a place where our children feel safe and live.”
It has made Cllr Warke fearful of going into the city centre with his children in case something similar occurs. “We have an issue on the Walls that we need to get on top of. The issue of young people drinking on the Walls has been raised before and we have to get it under control.”
The PSNI confirmed that a report was received “that a glass bottle had been thrown in the Newmarket Street area of Derry on Saturday evening, 14 December.
“It was reported, just before 9pm, that a bottle had been thrown from The Derry Walls, narrowly missing passers-by.
“A number of youths ran off when police arrived at the scene. There were no reports of injuries.
“Anyone with information is asked to contact police on 101, quoting reference number 1726 of 14/12/19.”