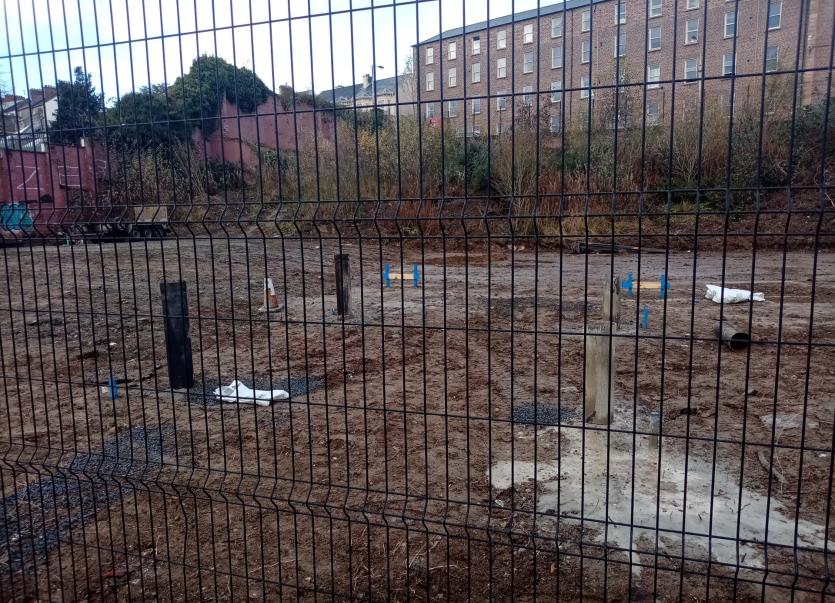 The site after some work was carried out last week

The owners of the former Tillie and Henderson site have been urged to publicly “state their intentions” amid concerns over further delays.
At the weekend, Council confirmed that pre-commencement applications have been approved therefore the developer is now free to start work on site.
A £10m mixed use development incorporating 139 bed hotel, 2 retail units, 15 apartments, car parking and associated works was granted planning permission on 1 December 2014 by the legacy Derry City Council. That remained in place for five years.
Minor work commenced at the site last week just days before planning permission was due to expire on Saturday, November 30. Two applications for ‘Discharge of Conditions’ were also being processed right up to the deadline.
One Derry councillor, Deputy Chair of the Planning Committee, has questioned why there was such a last minute “scramble” and he believes the owners should publicly declare their intentions.
People Before Profit Councillor Shaun Harkin said: “We have been waiting seventeen years now for something to be built there. It’s another one of these areas of Derry where we’ve been told there are plans for development but nothing is happening.
“There seems to be a bit of a scramble on right now but seventeen years is too long to wait in my opinion.
“It’s one thing to build a hotel, and we are eager for more development and investment in Derry, we want to see good paying jobs but there have been a lot of hotels built recently and there are plans for others.
“There is a crying need for more housing in the city and that has to be looked at. If this proposal isn’t able to progress then Council has to look at other options.”
Chair of the committee, Sinn Féin Councillor Christopher Jackson, said that given public interest in the site the owners do “owe the people of Derry” an explanation. He was however “delighted” to see work begin on the site as it in a prime location at the “gateway to the city”.
“We’re pushing to regenerate the city so it is disappointing to see a gap site like that. It was disappointing to see the former building destroyed by fire and we are all keen to see it replaced.”
There had been some public scepticism about work commencing days before permission expired.
Cllr Jackson said he hopes that wasn’t just done to “keep the permission alive” but is rather a “statement of intent”. Laying foundations is a tactic used by developers to trigger planning permission on occasion, he said, but any unnecessary delays would be “unacceptable” in this instance. He echoed Cllr Harkin’s call for the owners to clearly state their intentions along with a timeframe.
“The owner has gone to considerable expense putting the application through so I would be hopeful they are willing proceed,” he concluded.

Site owner, Rajesh Rana, of Andras House Ltd has been described as one of Northern Ireland’s most prominent and successful businessmen. He is also President of Belfast Chamber of Trade and Commerce.
Mr Rana is director of Andras Hotels which his father Baron Diljit Rana founded. It is Belfast’s largest hotel group, who own and operate six hotels in the city, the newest investment being a £12million Hampton by Hilton hotel which opened last year off Great Victoria Street.
In January of this year Andras was granted planning permission for a new £6.6m, 87-bedroom hotel in Portrush.
The planning committee at Causeway Coast and Glens Council dismissed concerns that the demolition of the former Londonderry Hotel for a new building could harm the "historic streetscape character" of the town centre.
Over 17 years have elapsed since Andras House Ltd first mooted plans to redevelop the Derry site.
Originally an application was made to redevelop the famous shirt factory building in 2002 to provide a hotel incorporating a fitness club, conference facilities and restaurants.
However, a decision was taken to demolish the Tillie and Henderson building in 2003 following a fire in December 2002.
In 2004, Andras House, applied to build a 144 Bedroom hotel facility, an application that was later withdrawn.
The site has therefore lain empty since the former listed building was demolished.
Tillie and Henderson factory, which was built in 1856, is seen by many as a symbol of Derry's textile industry, which dominated employment in the city for almost 140 years.
Rajesh Rana was contacted for comment over the weekend but a response had not been provided at the time of going to press.