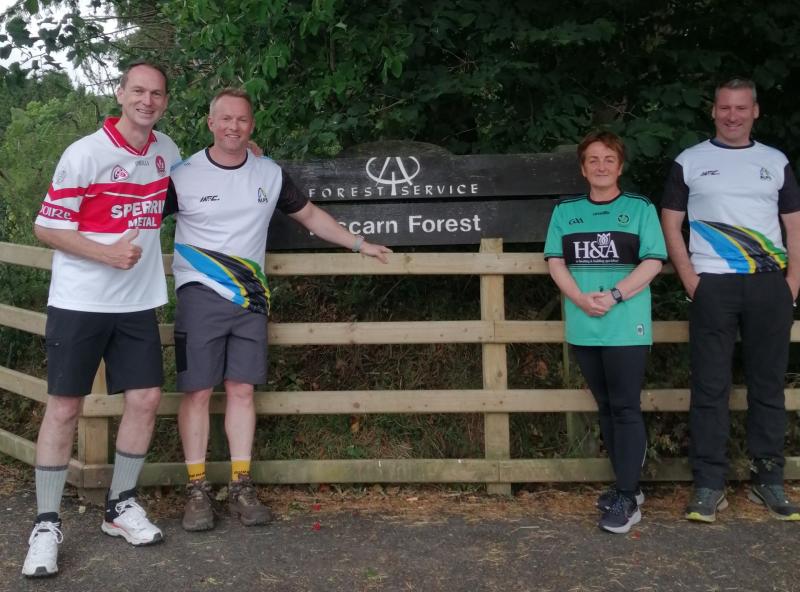 Frank Diamond, Robbie Bremner, Mary McGuigan and Tommy Hampsey, just four of the team who will take on the challenge.

In 2005, Bellaghy man Frank Diamond and a group of hikers were forced to cut short their climb of Mount Kilimajaro due to many of them suffering from severe altitude sickness.

When Frank reached safety at the base of the mountain, he vowed he would never take on such a challenge again.

However after 17 years, and a little bit of encouragement, Frank is once again preparing to take on the ambitious climb.

This time however he is determined to reach the summit.

The 50 year-old will be joined by 22 other people from throughout Ireland, including nine from County Derry.

Collectively, the group hope to raise £50,000 for ALPS (All Lives are Precious), a community-based mental health charity.

Frank, Chief Operating Officer of the charity, which was founded three years ago, says they rely heavily on funding.

From offices in Portglenone and Downpatrick, as well as satellite offices in Dungiven, Derry, Cookstown and Belfast, they deliver training on mental health, well-being, resilience and QPR suicide prevention.

The charity also offers free counselling services to those who need support.

The south Derry man says the demand for ALPS services is at an all time high.

“We are flat out at the minute,” he said.

“40 people came to us for free counselling within the last two weeks.

“Covid has been horrible for everybody and their mental health but we really see it in the schools we are working in and also in the communities we work in.”

Frank, who devoted 22 years of his life as a seminarian and then Missionary Priest, led a group of 28 people when he last took on the challenge in 2005 in aid of Friends of Africa.

“Seven of us made it to Gilman's Point, which is two hours from the top. At that stage, we only had one guide left. The others got altitude sickness and two of the lads were violently sick so it meant they had to go back down and there was no-one else to take us up,” he said.

“I wasn't feeling great but I would have stuck it out for those two hours. When I came down off it, I said I would never, ever try that again. The last bit was gruelling.”

However, during a trip to Tanzania with Downpatrick man and founder of ALPS, Ronan Gilchrist, the idea of climbing the tallest freestanding mountain in the world was again discussed.

“Three years ago, before Covid, myself and Ronan brought a group of six out to Tanzania,” continued Frank, who now lives in Kildare.

“We were working in a few schools and were delivering QPR Suicide Prevention training to over 300 people in Moshi and we brought the group to the foot of Kilimajaro. A picture was taken of me and Ronan under the big sign at the base and Ronan turned to me and said 'Frank, that's your next project'. I said 'Ronan, you're some craic, I would never try that again.'

“Then I thought about it and said 'you know what, never say never'. I'm going back out now 17 years later at 50 years of age.”

After putting a post on social media appealing for a team to join him on the climb, more than 20 people came forward.

The challenge was originally meant to take place two and a half years ago however it was postponed due to Covid.

The team, which includes mother and son Mary and Séamus McGuigan from Draperstown, will fly out this Saturday, July 2 and will spend seven days on the trek, returning on July 14.

They will be led by Frank's friend and experienced hiker Rob Mortell, who also lives in Kildare, and is the youngest Irish man to have climbed Everest. 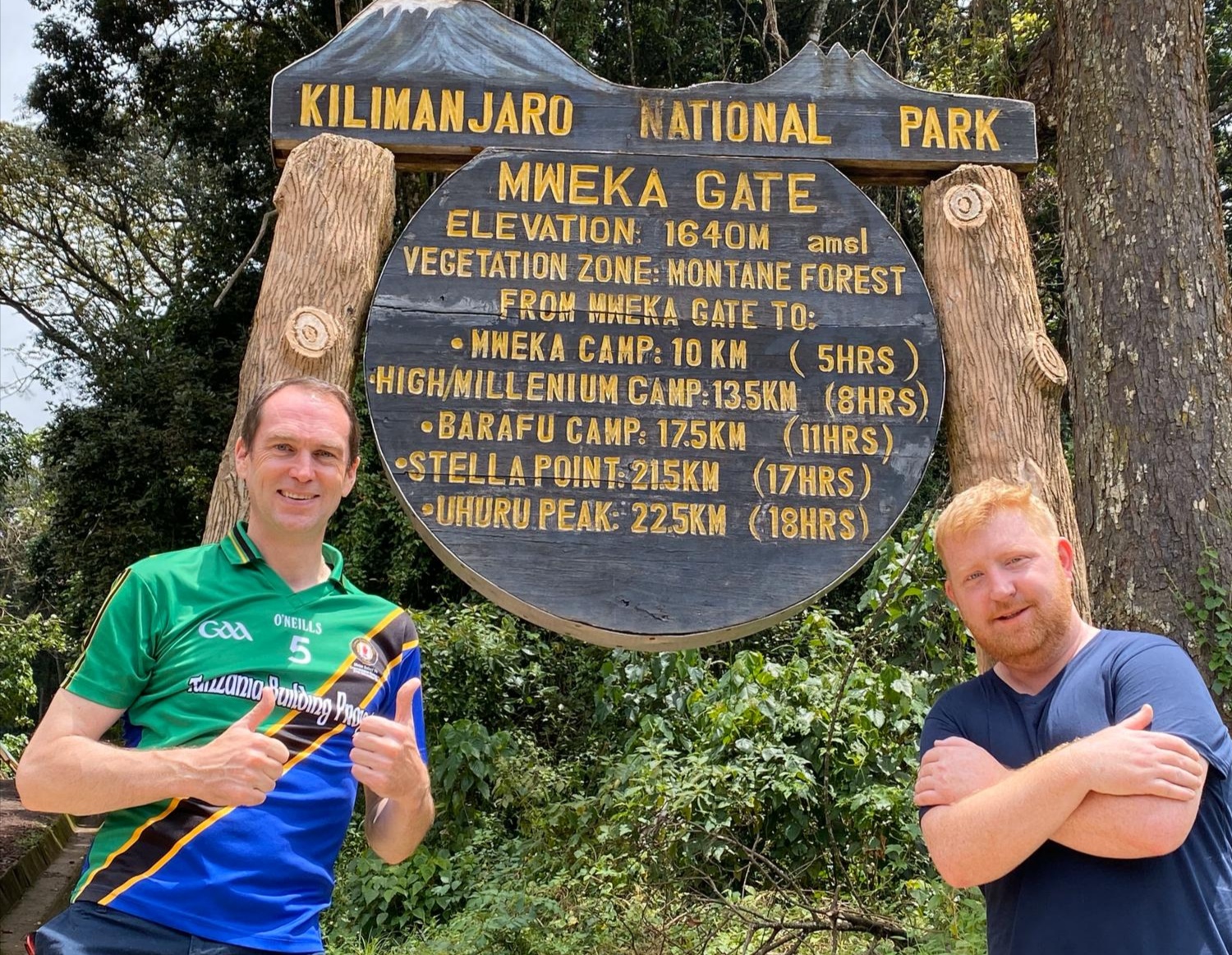 Frank Diamond (left) pictured with ALPS founder Ronan Gilchrist at the foot of Kilimanjaro three years ago before deciding to take on the challenge a second time.

Frank says all the participants are 'on their own wee journey' and have 'their own personal reasons' for taking on the climb.

“It will be a personal pilgrimage for me as I will be remembering all those who have sadly died by suicide and their grieving families especially my classmate Ronan McGuigan, my neighbour Paddy Young, Dylan Craig and Charles Conway,” said Frank, who also intends to make a donation to the Kildare Down Syndrome Branch.

“We all have a part to play in breaking the stigma around mental illness and suicide prevention.”

The group have been busy training for the mammoth challenge and have been meeting up once a month to climb the differnt mountains, including Slieve Donard and Charn Tochair.

On Friday night, team member Robbie Bremner also took on a 12 hour hike of Slieve Gallion to raise funds for the challenge.

For Frank, his main goal is to reach the top of Kilamanjaro where he plans to pose with the Derry GAA and ALPS flags.

“One of my objectives will be to get to the top,” Frank said.

“I'll be wearing my Derry jersey and we'll be bringing a Derry flag and an ALPS flag. We will all be out there for the All-Ireland semi-final. By that stage we will be down off the mountain and looking for somewhere to watch the game.”

Frank says fundraising is 'going well' and he hopes they can meet their target of £50,000 however he is keen to stress that any money raised will be put back into the community.

“Everyone has paid their own flights, accommodation and expenses so everyone has made that commitment.

“Everyone has been given a fundraising target of £2,000 and this money will go back into all the local services within the Mid Ulster area and beyond. I think it's very important to support your community-based charities,” he added.

If you would like to make a donation to ALPS visit https://www.gofundme.com/f/im-heading-for-the-top-of-the-world or www.alpsltd.org/donations