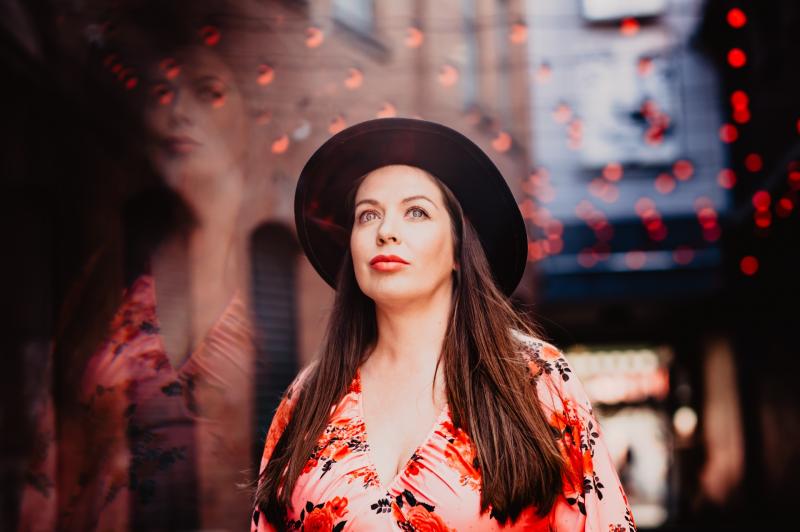 Kate NIcholson from Ballinascreen has fulfilled her dream of recording an album.

Lockdown provided many people with a chance to take up a new hobby to fill their time, get fitter or hone their culinary skills.

For County Derry GP Kate Nicholson however, the Covid pandemic gave her the opportunity to fulfil her dream of writing and recording her debut album.

The Moneyneena woman, along with her husband Chris and young son Oisin, had just moved into their new home in Portstewart weeks before lockdown hit in March 2020.

The 35 year-old was on maternity leave at the time and toyed with the idea of releasing her own music.

After uploading one of her songs onto her social media account, Kate was spurred on to keep writing following a positive reaction to her music.

“I have been writing songs since I was 17 but I just never really got the chance to go down this road properly,” explained Kate, who is better known in Ballinascreen as Catherine Kennedy.

“It really all happened during lockdown and maternity leave. The whole world shut down so I kind of found myself needing a creative outlet so I went down this path and started off with one single and it turned into the whole album.”

Growing up in rural County Derry, Kate was inspired by the musical talent all around her.

“I've loved music as long as I remember. Draperstown is a great hub for music,” the former St

“The likes of Maurice Regan and Glasgowbury brought music into the town. I actually live a mile from Glasgowbury so I've always looked up to the scene.

“I've worked in Danny Otterson's music shop in Maghera and I worked in the Empire Music Hall as well when I was younger so I always had lots of music around me.”

Even though she has been singing at wedding ceremonies and other events in local churches since the age of 13, with some encouragement from her older brother, Kate decided to explore songwriting.

“My brother bought me a guitar for my seventeenth birthday and suggested I maybe try and write some of my own songs, so that's when it all started and it was always a nice distraction from doing A-levels,” she said.

Fast forward 18 years and Kate has just released her second single 'Wrong Side of the Town' from her upcoming debut album 'Fallen from Grace', due for release in the New Year.

The new single, which features the unmistakable vocals of Cormac Neeson, lead singer of The Answer and successful solo artist.

Despite the new song only being released five days earlier, Hotpress announced it as its track of the day on Wednesday.

On Friday night past, Kate and Cormac performed the song live for the first time at an 'In the Round' night of music with Sound of Belfast in the Empire Music Hall.

The gig was one which Kate had been dreaming about for some time.

“I used to glass collect there (at the Empire) and I used to look up at that stage and listen to all the amazing music so it's a bit of a dream that this is happening,” said Kate.

“I'm a really big fan of Cormac's. He was one of the acts that stood out to me when I worked in the Empire. He was playing in his band The Answer and I had to rub my eyes to check it wasn't Robert Plant. He has just one of the best voices in the industry, I think.

“I worked with Mojo Fury's frontman, Michael Mormecha for the album and I told him that I would love Cormac to sing on this song and he just asked him and sent him the song and he said he was up for it.

“It's really funny, a year before this all came about, I was at a gig and Cormac was playing at it. I said to my husband Chris 'how cool would he be on 'Wrong Side of the Town'?' I had the song written and had this all in my head and it's happened. It's pretty cool how it worked out.

“This is one of my favourite songs to date. I love the blues rock sound we have achieved using inspirations from some 'Deep South' Americana/ Blues music and some soundtracks I love, such as 'True Detective' and 'Sons of Anarchy'.

“'Wrong Side of the Town' explores the often fine and blurry line that can exist between having a really great time, and that of self destruction. The song aims to look at this from various angles.”

Kate, who recently became a mum for the second time to baby Tomas, now three months-old, admits that her music 'doesn't fit neatly into any category' and she is heavily influenced by a variety of artists.

“I love a big range of music but Dolores O'Riordan of The Cranberries is one of my icons. I also like Amy Winehouse. There's also a big American theme running through my music,” she continued.

“I call it alternative country rock – the closest thing to it would be Sheryl Crowe - it doesn't fit neatly into any category.”

So, with her newest single receiving rave reviews and an album launch just around the corner, Kate says she is looking forward to more live performances and is even thinking about her next project.

I got really great support for it and I'm just looking forward to getting the whole album out and hopefully there will be a nice celebration for it.

“I'm also looking forward to being able to perform to a live audience. I've played live over Zoom through a group called Mothers in Music with the Oh Yeah Music Centre who have been really supportive.

“Charlene Hegarty from Maghera is the talent development officer with the Oh Yeah Music Centre and she has been helping us Mothers in Music as a group. It's been lovely to have her support.

“There's just something very special about playing live in front of real people. It's so different compared to performing over Zoom – it's like night and day. Zoom was brilliant for the times that were in it but live music is where it's at. There's just something about the atmosphere and having people in the room at the same time.

“Thinking about the future, I love Irish traditional music as well so I'm kind of thinking along those lines for the next project maybe. It's something a bit different.”

Kate says she enjoys making the trip home to Moneyneena once or twice a month and says she is delighted with the support she has received from locals.

“I love Moneyneena. It's a gorgeous part of the world. I am delighted to still be living in County Derry, so I'm not too far away.

“I've been really taken aback by how supportive people have been. I've had really nice support and I couldn't be more grateful for their support and encouragement but I don't take anything for granted. I'm just going to enjoy it,” she added.