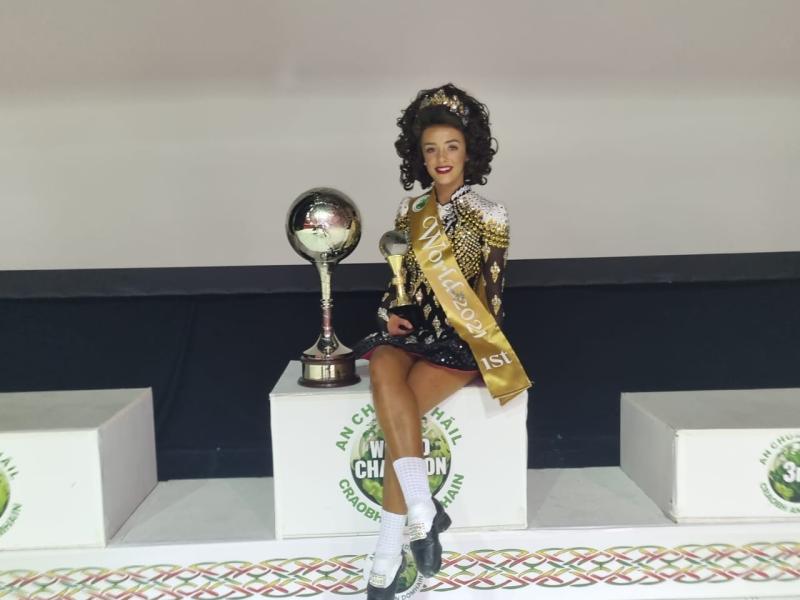 Eimhear O'Hara pictured with her trophy.

They say good things come to those who wait.

For Foreglen teenager Eimhear O'Hara that was certainly the case when she was crowned U15 An Chomhdhail World Irish Dancing Champion at the start of November.

For Eimhear, it was a moment she had been waiting on since 2016 when she got her first taste of dancing at the prestigious competition which attracts Irish dancers from all over the world.

“The first year Eimhear danced at the Worlds she came sixth. In 2017 she came fifth, in 2018 she came third and in 2019 she came second,” said Eimhear's mum Bernie.

With the Covid-19 pandemic hitting in early 2020, Eimhear's dreams of becoming a World Champion were put on hold once more.

“She was so close the last year she performed at the Worlds and she just had it in her head that she was for doing this year – she was determined,” Bernie continued.

Mum Bernie made the trip to Killarney with Eimhear, who has been dancing with the McNicholl School of Irish Dancing for approximately 12 years.

She watched on proudly as her daughter took to the stage on November 4 to show her best moves to the judging panel.

It was a tense wait at the adjudicators made their decision and when Eimhear's number was called out Bernie said they both 'couldn't believe it'.

“We are just so delighted, there are no words for how we are feeling,” said Bernie

“We are all just over the moon. Eimhear puts in a lot of work. She goes to classes three times a week and her daddy Anthony got her her own wee studio out the back so she can practice at home. She'd be out there for an hour or more every night.”

Paying tribute to McNicholl School of Irish Dancing, Bernie said: “Sinéad, Seamus and Niall have been really, really supportive of her. They also put in so much work behind the scenes and should be commended.”

“Eimhear just couldn't wait to get back to see everybody to celebrate her success. All the family were there with a big banner to welcome her home. Fr O'Reilly even congratulated her from the altar at the weekend masses.”

Speaking about her success, Eimhear, who also plays camogie for Banagher GAC, said she really enjoyed the experience.

“It is indescribable how I'm feeling and I just want to thank Sinead, Seamus and Niall so much,” said the teenager.

“I enjoyed dancing on that stage so much and I just couldn't wait to get on there because I didn't have a single nerve in my body. When my number was called out I just burst out into tears, I was just so happy.

“My friends couldn't believe it. They were texting me and messaging me when I was crowned World Champion as they were watching it live on Facebook.

“I'm now planning to compete at the Worlds in April 2022 so I'll be back at the dancing again this week,” she added.

She said: “Eimhear is a really good example of hard work pays off and not giving up. She deserves this title so much as she was simply outstanding . Her self belief and the hard work she put in are what earned her that success.”