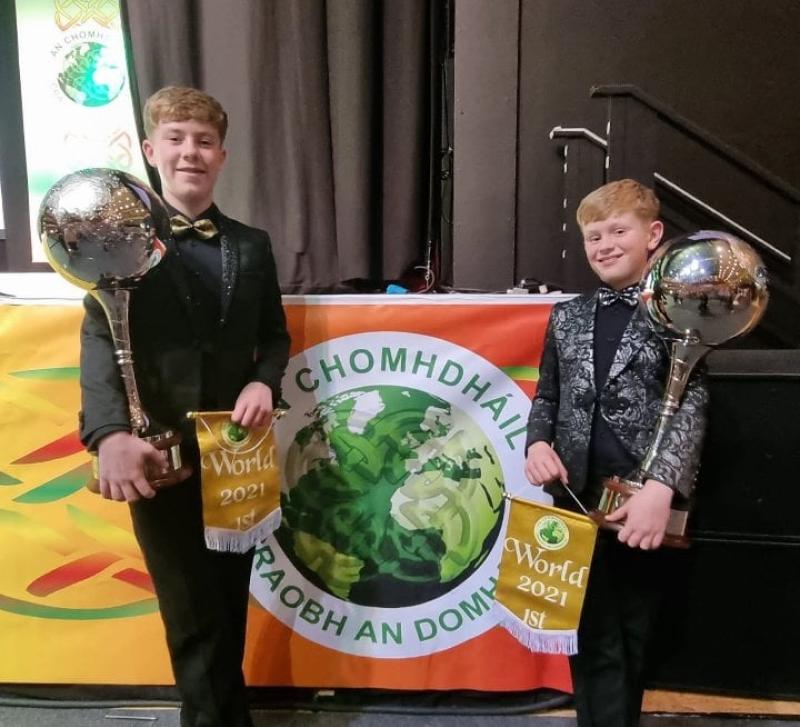 Odhrán (left) and Oisín Burke pictured with their trophies.

Talented Odhrán (13) was crowned U13 An Chomhdhail World Irish Dancing Champion at the World Championships held at Gleneagle INEC Arena in Killarney from November 1 to 6.

Both brothers dance with McNicholl School of Irish Dancing which is run by their mum Sinéad and uncles Niall and Seamus McNicholl.

Dancing since they were two years-old, the boys are no stranger to competitions with Odhrán now a three-time World Champion.

As he was preparing to defend his title for a third time in 2020, with Oisín aiming to dance at his first Worlds, the competition was cancelled due to Covid-19.

“The two of them had danced in the Ulsters in 2019 and both had won their respective Ulsters.

“The Worlds were meant to be held in April 2020 but covid hit and they were cancelled. Then they were postponed in April 2021 until the start of this month.

“The Worlds was their goal. Odhrán had won it twice and Oisín had missed a chance to go for it because of covid and he kept asking Odhrán 'what does it feel like to be a world champion?' My heart just broke for him because you just don't know what's going to happen on the day because you have to perform on the day. Not everybody dances the same every single day. When Oisín got it I said to him 'now Oisín you know what it feels like to be world champion'. That's all they want is to be a world champion and that's it.”

Prior to the World Championships, the brothers, who both attend St Patrick's College in Maghera, had been putting in hours and hours of practice, Sinéad says.

“The boys practice three nights a week at class and then obviously with me being their teacher I do the other two nights,” said Sinéad.

The boys, who also play hurling and football for Banagher, managed to fit in dance practice with their club training.

“The nights they would have had training, their daddy Gerard was taking them to hurling from six to seven o'clock and then they'd be coming to class with me from eight to nine o'clock. They do put so much into it. I always say to them 'boys, you only get out what you put into it',” said the mum-of-three.

“My boys have basically just been brought up with it (Irish dancing). Odhrán started when he was two years-old and Oisín when he was about two and a half to three years old. They were at competitions with me and other children and I used to say' it's good to get them used to the music so that they have rhythm and timing'.”

Sinéad, who is also an adjudicator, began dancing herself at two years-old with her uncle Eugene Smith.

Speaking about the championships, which saw over 1,400 dancers take part in competitions across the six days, Sinéad said: “There is nine judges and you have three different dances to do. The third round is the one you do on your own. I call it the masterpiece and the both of them got full marks in that. Sometimes, whenever you are dancing in groups because the judges are watching so many people at the one time they mightn't be noticed as much. I always tell them whenever you come out on your own, this is your chance to show them what you are best at.”

When the boys' numbers were called out on stage, their proud dad Gerard and younger brother Micheál were watching online.

“The results were all done live so Gerard of course was glued in at home and there was plenty of tears and phone calls back and forward.

“It's an absolute dream to have two world champions in the house. The boys put so much into it and as I said they only get out of it what they put into it and they put everything they had into it. The competition between the two of them is unreal. Each one wants to be better than the other and it can get a wee it out of hand at times,” laughed Sinead.

Speaking about his third title, Odhrán said he was delighted.

“It's a great feeling – it's hard to describe. I was amazed that I won in the end up as I didn't think I was going to win,” he said.

“It's good to have the two of us in the one house as World Champions. My friends all think it's really good and they love the trophy because it's so big.”

Oisín said: “I feel really good about being World Champion. I enjoyed taking part in the Worlds and like being a World Champion with my brother.”

With a week off from practice, both boys were back at dance class last night (Monday) with their sights firmly set on the 2022 World Championships in April.

“They realise on the day they were the best and that they can go the next time and it could be somebody else's turn.

“With me being an adjudicator and a teacher, I know that things can change week in week out. It was just their turn this time and I am so thankful the two of them got it at the same time. It just made it extra special,” added Sinéad.