McKaigue feels Derry are far from the finished article

Winning games is the only currency 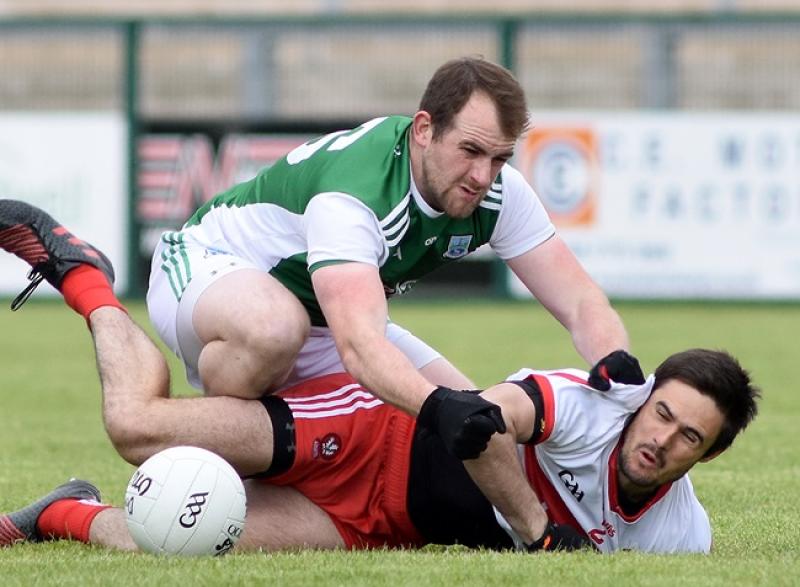 While Fermanagh's win over Cavan helped sharpen Derry's focus for Saturday's clash at Owenbeg, for Chrissy McKaigue the important factor was how the Oakleafers focussed on themselves.

Two wins from two is a pleasing start to their promotion challenge and McKaigue described their latest victory as a 'relatively disciplined performance'. On a day when Derry scored 4-12 from play, he was pleased with his side's 'very clinical' display in front of goal.

“The goals changed the flow of the game, there is no doubt about that,” added McKaigue, who helped restrict Sean Quigley to a solidarity point from play.

“We are under no illusions, we are still far from the finished article,” he also offered. Going the next step will only come with a run of games. He referred to a league semi-final that Derry have almost two feet in, with a score difference as good as an extra point on the table.

With Ulster champions Cavan coming down the tracks on Saturday, McKaigue expects no let up.

“We have so much to work on and we haven't had a huge amount of games.” he said. Then, factor in competition for places and his manager Rory Gallagher's outlook.

“With the way Rory is, it's a hard edge mentality and we try to win every game. We have to respect the other teams in the group and try to put our best foot forward.”

McKaigue, who made his championship debut against Monaghan in 2008, is the elder statesman of the team and the 'exciting' young players coming into the fold were among the reasons why Derry 'backed themselves' coming into Saturday's clash.

“Look at Ethan Doherty, look at Shane McGuigan, look at Conor Glass,” he points out. “We have Gareth (McKinless) coming from the back, Paudie Tad (Cassidy) fully fit again and Paul Cassidy.

“We have some pretty decent players coming through. They are starting to put their hand up and show they are inter-county footballers.

“It showed in some of our attacking play, we were very slick and very clinical. We have a few things to tidy up on. We try to focus on ourselves, while giving the opposition the respect they deserve.”

McKaigue is one of five current panellists to have played in all four divisions of the NFL, with Benny Heron the last to start a game in the top flight. The seven-point win over Cork at Owenbeg, in April 2015, wasn't enough to stop Derry from the drop.

It was the last time the Oakleafers won a game in the Ulster championship, a competition McKaigue terms as 'unbelievably competitive'.

Winning matches of 'any kind' and climbing the divisions. That's how he views the targets for the new-look Derry squad.

“It has been two decent performances, but this group of players has still a bit to go, but the most important thing is winning games. Winning is the currency that matters in this sport. We want to compete and we want to win.”

In terms of championship, Donegal and Tyrone have been around football's top table and have knocked Derry out of the Ulster race.

“I think our only focus is trying our very best to try and get out of Division 3. You want to ply your trade in a higher division, then the championship takes care of itself.

“There is no question about it, a good league campaign gives you great momentum for the championship.

“We have nothing to concern ourselves with, only winning as many league games as possible to give us the best chance of preparing for a championship.”

Suggesting crunch championship games Derry could've won and you think of Mayo 2017 and Tyrone 2019, but McKaigue points to another.

“The Tipperary game (in 2016) was a big one and we were very close to getting to the last 12 and they went on to the semi-final, to be narrowly beaten by Mayo.

“Sometimes people think when you're beat in the Ulster championship, that the championship is over. Derry don't have a bad record in the qualifiers, but we need to get a harder mentality to winning games and competing.

“When you do that, then you can start talking about different rungs of the ladder. For us it is about Cavan and getting into a league semi-final and if we can get into that league semi-final, that is the first championship game of the year.”