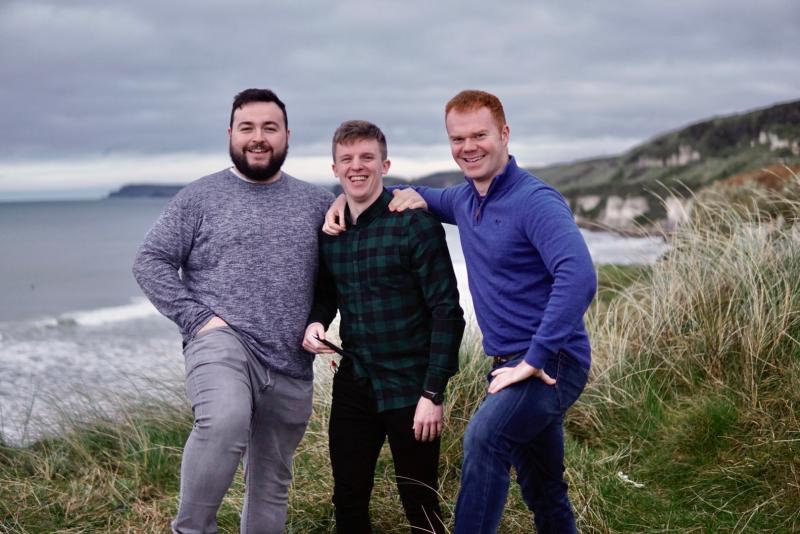 Three local teachers are taking part in an unusual challenge next month to raise both awareness and funds in support of men’s mental health.
Deaglan McErlean from Bellaghy, Anthony McGill from Lavey and Eoghan Kennedy of Rasharkin, Co Antrim, will leave the north coast at sunset on February 16 and drive all the way to one of the lowest points in Ireland, while completing some mental health challenges en route.
The idea came about following a bizarre trip that the three friends took to New York.
“We all went to New York together and we all booked the flights at different times. I decided that morning that we would make a video as a ‘Race to New York’ says Deaglan.
Anthony adds: “People seemed to love it and one of us mentioned that it would be great to do for a charity over mid-term. Men’s mental is very relevant to us so we decided on that.”
“As educators we see it in a school setting and we see it’s not just fully-grown men, it’s coming into children’s lives as well. It’s a big problem in this country at the minute.”
Since they started fundraising, they have raised over £1700, with £1000 of that donated within 24 hours of the original post.
“I think the fact it’s novel has helped,” says Eoghan, “and even if nothing else happens, we’ve already had success. Within 24 hours we met the target of £1000 - we’re close to £2000 now and it’s only been two weeks.”
The teachers will be joined by friends Ryan Bennett, Martin O’Neill and Michael Scullin and will travel from Portmuck, Ballycastle and Moville all the way to Crookhaven in Co. Cork by the time the sun sets on February 16. Deaglan already has an eye on the clock.
“It’s 9 hours without using motorways or tolls so it’s all just normal roads – it’s going to be a tight squeeze but there won’t be any speed limits broken!”
“We’ll be doing Top Gear-style challenges along the way, a bit like the New York video.”
Eoghan explains that the challenges will be promoting positive mental health and looking at strategies for improving this, as well as being fun and engaging.
“We’re not going to stress ourselves out with the challenges, it will be things you can do to improve your mental health along the way. Although we might feel awkward doing them, you know it might be beneficial to somebody.”
Although the money raised will go to Aware NI and PIPS, the idea that the challenge will get people, particularly men, discussing their mental health is the main reason the lads decided to take on the journey, as Deaglan explains:
“The donations have been outstanding but if you can get people talking that’s even more important. People have actually spoken to me about stuff already.”
The three lads will face many challenges but the Bellaghy man has an eye on a more practical reason for delay. “Sunday carveries” he grins.
You can follow Deaglan, Anthony and Eoghan’s journey on Instagram (@sunrisetosunsetchallenge) or like their Facebook page for updates. They have also set up a Just Giving page with all proceeds being evenly split between the Aware NI and PIPS charities.