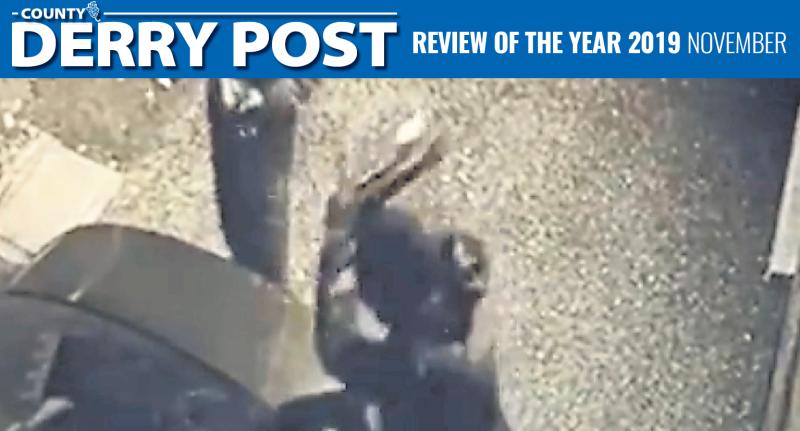 CCTV footage reveals shocking attack on home
Also in November, CCTV footage revealed the shocking depth of an attack on a home in the south Derry town of Tobermore.
Footage emerged of two masked men torching a car and smashing windows at the house at Hazel Grove in the early hours of the morning.
The masked attackers are seen emerging from a Volkswagen Passat estate car and destroyed an Audi vehicle at the home. One of the assailants poured a flammable liquid through the rear window of the car before attempting to set it alight.
The second attacker is seen in the footage smashing windows at the home. Both assailants then returned to the Audi car and successfully set it on fire at the second time of asking before fleeing the scene. The getaway car was later found burned out at Lisamuck Road near Maghera.

MLA hits out as health service crisis worsens
November started with the Derry Post reporting that rural areas in the county are the worst affected areas by the ongoing crisis in the health service.
Patients awaiting surgery, cancer treatment and domiciliary care packages are facing long and excruciating delays for access to services that an MLA for the area says required immediate government intervention.
SDLP Assembly member Patsy McGlone revealed that his constituency office was inundated with concerns over the level of care being offered. He said issues that were being consistently raised included the availability of ambulances and a dearth of staff working in health clinics and hospitals.
“Traditionally, at this time of year the demand on health services starts to build, but what is different this time is that we have seen an increase in the number of constituents who are coming to us over hospital admissions.
“People waiting for surgery, for a consultant appointment- I even had someone with me recently waiting on cancer treatment.
“There is no doubt about it, the health system is under pressure, both locally and further afield. It is a resource issue- we need more staff, more consultants, more doctors and more nurses. Those working in our health care system are left coping with the huge demand and are feeling the pressure. We need to invest in staff and we need to do it now,” he said.