“It was especially nice for them to share the experience as sisters and to be there to support each other.” Barbara Leacock speaking after her daughters were signed up by a modelling agency. 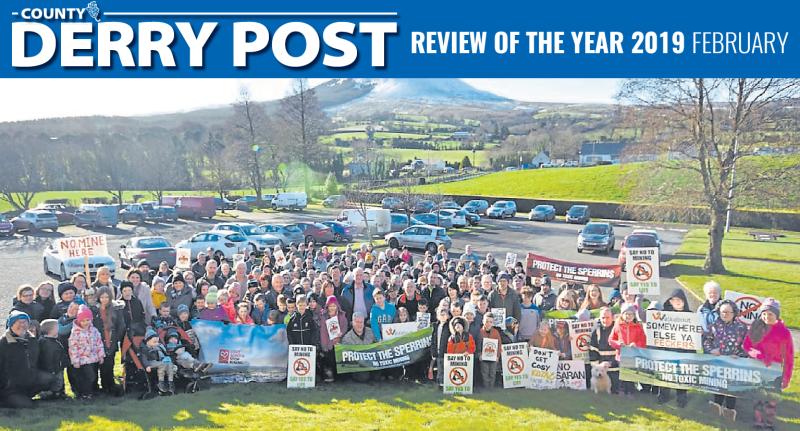 Guns, knives and suspected acid seized in search of graveyard
Loaded guns, knives and a quantity of suspected acid were seized by police during a PSNI search of a church graveyard at Park in County Derry in February 2019.
The pre-planned search of the cemetery at St Mary’s Church in the village was made just before around 200 members of the Travelling community came there for a memorial service.
A heavy police presence was also notable in the area during the church service as tension amongst those present escalated.
Various videos of the scenes at the church were also latterly widely circulated on social media channels.
Speaking after the incident, PSNI Inspector Alan Hutton said his officers had no option but to use batons during the events.
“A crowd of more than 200 people gathered in the grounds of the church and we deployed sufficient officers to keep people safe and prevent disorder.
“However, as tensions between two groups escalated it was necessary for officers to intervene and use minimal force including the use of their batons given the number of people involved. There were no reports of any injuries and no arrests made at the time.”

‘Say No to Mining, Say Yes to Life’
Following on from political opposition to plans for goldmining in the Sperrin mountain range, County Derry communities united in a fight against the plans.
February began with the Derry Post reporting that around 200 people turned up at Kennaught Chapel in Desertmartin to protest against the plans.
Men, women and children carrying posters and banners proclaiming slogans such as ‘Say No to Mining, Say Yes to Life’.
The protestors were comprised of people from two Co Derry anti-mining associations – ‘Protect Slieve Gallion’ and ‘Love ‘Screen stop Mining’ and were joined by members of ‘Save Our Sperrins’ from the Greencastle area of Co Tyrone.
Speaking to the Derry Post, the groups pledged to maintain their opposition to the plans to extract gold from the mountains by a range of mining firms.
A statement said: “Our aim is to inform the people of the severe health implications a mine or a processing plant in Slieve Gallion would have on the people of this country. That is why we would encourage people to attend our public meetings and listen to the truth about what is being proposed right on our own doorsteps.”

Young sisters signed up by modelling agency
The County Derry Post also reported in February that two young sisters from the south Derry town of Tobermore had been snapped up by a top modelling firm.
Seven-year-old Emma Leacock and her 15-year-old sister Amy were invited to join the NI Modelling School after being spotted at the Miss Wonderland competition in Belfast where Emma won her section.
Proud mum Barbara said: “She was absolutely thrilled to win and felt like a princess in her pretty dress and tiara.”
Amy was crowned Miss Enchanted and Barbara added: “Amy and Emma both loved taking part in the event, it was a new and different experience for them, and they really enjoyed it and making new friends.
“It was especially nice for them to share the experience as sisters and to be there to support each other.”

Hearing into mystery death of republican
A hearing into the death of a former IRA prisoner who naked remains were found on the shores of Lough Neagh was held in February 2019.
The body of Gerard ‘Shorty’ Hampson was found at an isolated stretch of the lough in January 2008.
At the time, a post mortem examination was inconclusive with a pathologist stating “there must be considerable suspicion around his (Mr Hampson’s) death.”
The 53-year-old grandfather from Feeny had been living in Derry city at the time of his death. He had served time in prison for IRA activities and was connected to dissident republican group, the 32 County Sovereignty Committee.
In 2016, eight PSNI officers were disciplined for failing to properly investigate Gerard Hampson’s death.

‘A woman of fashion, fun and faith’
Tributes were paid to Kathleen Mary Groogan after the woman who founded the first fashion boutique in her native Dungiven in the 1950s passed away.
Lifelong friend of the deceased, Sinead McNicholl said: “It was the first boutique in this area and people came from far and near to get the up-to-date fashion. I would spend my month’s wages in it, it was so good.”
Groogan’s shop continues to thrive at Dungiven Main Street, now safe in the hands of Mary Kathleen’s niece Karen Groogan who said she “misses her support and mentoring in all aspects of the business. She was someone you could always turn to.
“She was also a woman of great faith. She supported many charities, one of which was Mary Mullan’s Guatemala Fund.”