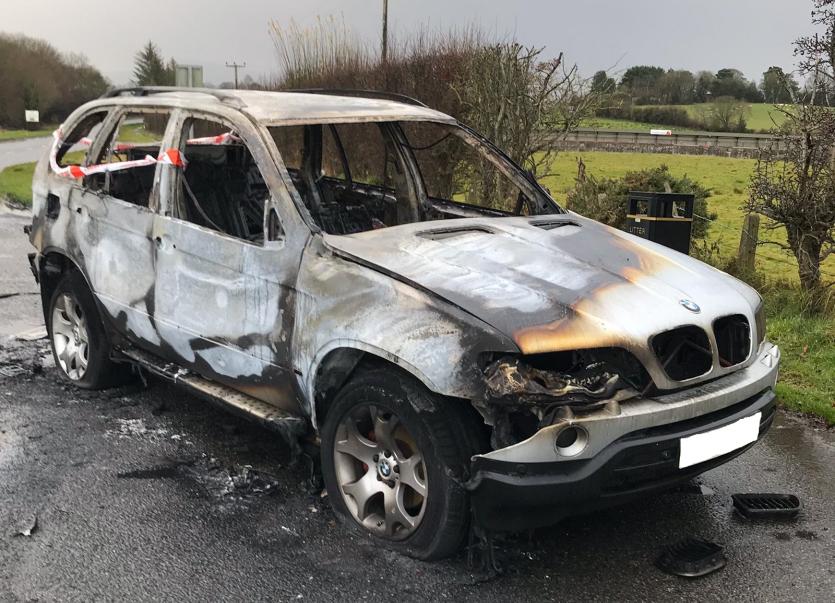 Picture of the charred remains of a car targeted inTobermore at the weekend.

Concerned residents of a small County Derry village hit by a second arson attack in the space of a few weeks, say they fear a campaign of intimidation is being waged by one individual.
Locals living in Tobermore spoke out after yet another fire attack on a car at the weekend.
The PSNI said they are investigating the incident, which happened in the Tobermore Road area at around 11pm on Saturday night.
The victim - a local businessman - is understood to have parked his BMW 4X4 in a layby earlier that day.
The arson follows a similar attack on a car and a home in the village on November 16.
In that incident, two masked men wee caught on CCTV setting fire to an Audi A6 parked outside a house in the Hazel Grove area. A number of windows of the family home were also smashed as the occupants - including young children - slept inside.
The victim of that incident was described as a "well respected member" of a local football club.
It's understood he has no connection to the latest fire victim.
However, concerned locals who contacted the County Derry Post say they believe the two attacks are linked, and shockingly claim that one individual is behind both.
One man living in the village, who did not want to be named, said locals have been left terrified and fear that anyone who speaks out 'could be targeted next'.
The man claims there has been a series of attacks in the village and surrounding area going back 15 years, and linked to the one individual.
“Everyone is terrified of this man," he told the County Derry Post yesterday. "A lot of people are just putting their heads into the sand and I can understand that.
“No one wants to stick their neck out. There is no rhyme or reason for these attacks. He just wants to control things or control people.”
He said more minor incidents have not been reported to the police.
“People are waiting to see who is next. He seems to have free reign. He seems to think he is a godfather or something.
“People don’t know what to do. Apart from that one man, it is a nice quiet village. Everyone is afraid to speak out. That’s the problem.”
Last month Upperlands Football Club issued an appeal for information after one of its members had his car and home attacked.
Shocking CCTV showed two masked men - one armed with a hammer - smashing the window of an Audi vehicle outside a home before it burst into flames.
Damage was also caused to the man's Hazel Grove home.
A VW vehicle, believed to have been used as a getaway car in the shocking attack, was later found burnt out a short distance away close to Maghera.
Condemning the incident at the time, DUP Westminster candidate for the Mid Ulster area Keith Buchanan said: "This type of behaviour is totally unacceptable and I would urge anyone with information to pass it on to the PSNI.
Mid Ulster District councillor Anne Forde also strongly condemned the incident.
"When people are out and about looking forward to Christmas it's disappointing that this has happened,” she said.
Anyone with information on either attacks is asked to contact police on 101 or Crimestoppers.