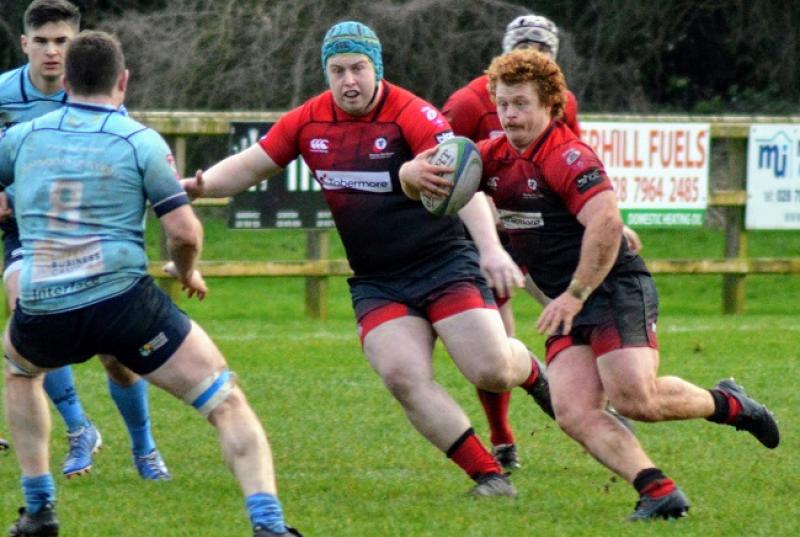 B Roberts on the attack, supported by J McIntosh. (Pic: Charles Henderson)

Rainey will commence the 2020/21 season in Division 2A, after Irish Rugby's decision to end the season 'with immediate effect'.

The Magherafelt club's games this month - against Buccaneers, UL Bohemians and Dolphin - were already postponed due to the Coronavirus and it's unlikely the season was going to be finished.

MU Barnhall were leading the pack but there will be no relegation or promotion and cups will be shared by any finalists.

"Whilst not an ideal way to end the season, it is 100 percent the only logical and correct decision that Irish Rugby could have made in the circumstances," read a statement on Rainey's Twitter account.

"We look forward to meeting all our clubs and friends from this season in 2A again next season."

City of Derry currently operate in Division 2C and will remain there.

The directive was ratified by the IRFU Rugby Committee on Thursday night.

The planned expansion of the Energia Women’s All-Ireland League for the 2020/21 season remains in place.

"The decision to end the domestic rugby season for 2019/2020 season has not been made lightly. All options were discussed and the IRFU is satisfied it has arrived at the only equitable solution," said IRFU Director of Rugby Development Colin McEntee.

"These are challenging times for us all and we know clubs will be impacted by this directive, but we will look back at this season as one where we put the physical welfare of our rugby community above all else.

"Clubs are now in a position to make plans for the 2020/21 season. We look forward to marking the 30th anniversary of the All-Ireland League."

"The FA’s Rules and Regulations state that "the season shall terminate not later than the 1 June" and "each competition shall, within the limit laid down by The FA, determine the length of its own playing season," read a joint statement from FA, Premier League and EFL.

"However, The FA’s Board has agreed for this limit to be extended indefinitely for the 2019/20 season in relation to Professional Football."

READ ALSO - Derry GAA clubs to be given 'two or three weeks' notice for resumption of action.  Click here...