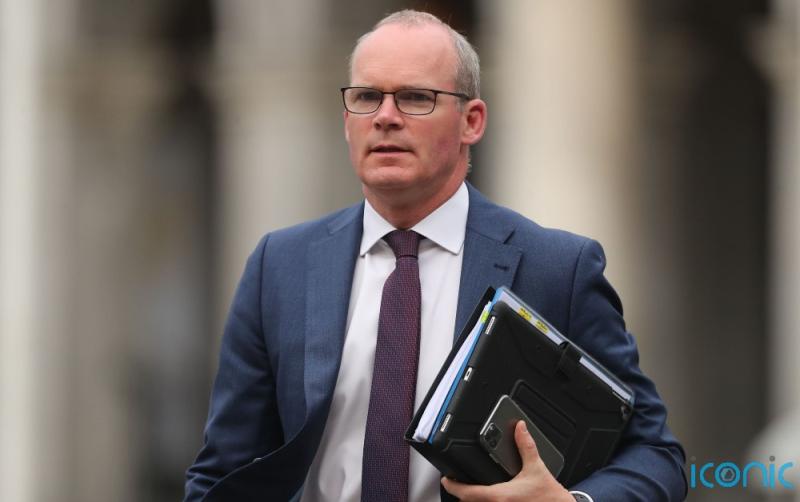 Simon Coveney has downplayed the prospect of a major breakthrough in negotiations on Brexit’s Northern Ireland Protocol next week.

Ahead of a meeting of the EU/UK joint committee on the implementation of the contentious Irish Sea trading arrangements on Monday, The Minister for Foreign Affairs urged against “unrealistic” expectations about what might emerge from that engagement.

Mr Coveney also insisted that the Irish Government was not a bystander to the ongoing political crisis at Stormont that has flared amid ongoing unionist anger at the protocol.

But he did express concern about the long-term future of the powersharing institutions following the recent collapse of the coalition administration.

He was commenting on the uncertainty over whether the political will would exist to reconstitute an executive following May’s Assembly election.

The minister travelled to Belfast on Thursday for meetings with political leaders two weeks after the DUP pulled first minister Paul Givan out of the Executive in protest at the so-called Irish Sea border with the rest of the UK.

Asked about the prospects of significant progress on the issues of dispute between the EU and UK next week, Mr Coveney said: “I think it’s important not to be unrealistic in terms of the expectations that may come from that meeting.

“I think the likely scenario is that there probably will be a joint statement from both sides in terms of outlining the issues that they want to try and address together.

“But we should use that as a staging point for progress, as opposed to a reminder of how far apart the two sides continue to be.”

The minister had meetings scheduled with Sinn Fein, the SDLP, the UUP and Alliance Party on Thursday.

DUP leader Sir Jeffrey Donaldson was travelling on Thursday and a meeting between himself and Mr Coveney was expected in the coming days.

Asked why it had taken two weeks for him to come to Belfast to meet politicians, Mr Coveney said: “I can assure you we’re not bystanders and that’s why I’m here to meet in person with all the parties that are available to meet.

“But we have been talking to parties in the meantime, as you would expect, and, of course, I speak to the British government all the time, in particular Liz Truss, and I speak to Maros Sefcovic (European Commission vice-president) a number of times every week.

“So we are keenly involved in actually trying to find compromise positions and trying to find a way of reassuring people that the Northern Ireland Protocol can be implemented in a way that everybody can accept.

“And, of course, we’re watching closely in terms of the instability in terms of Northern Ireland politics as we lead into Assembly elections now in May.

“And, of course, thinking about post those elections how the two governments could work together with all of the parties in Northern Ireland to bring about political stability here.”

Asked if he was concerned about Stormont’s long-term future, Mr Coveney said: “I think everybody should be concerned.

“You know, we’ve had a period of tension and polarisation, much of that links to Brexit and the Northern Ireland Protocol issues, I accept that.

“But we move into an election cycle now and I think all of us have to try to think ahead in terms of the consequences of that election, we have to respect democracy and what people choose in terms of the parties and the make-up of a future assembly.

Mr Coveney said both the UK and EU acknowledged the consequences for community relations in Northern Ireland of the ongoing failure to resolve the dispute over the protocol.

But he pointed to a recent opinion poll as evidence that the protocol was not a major issue of concern for most people in the region.

“Both the British government and the European Union, I think, are very conscious of the fact that the inability so far to settle some of the outstanding issues around how the protocol is implemented is having a very polarising impact on politics in Northern Ireland,” he said.

“I think we were also reminded in the last few days that not everybody on the streets of Northern Ireland are talking about the protocol in the context of these (Assembly) elections.

“In fact, less than 7% of people polled in Northern Ireland have said that the protocol is the first issue for them in terms of how they’ll vote. So you know, I think we need to put this into perspective.

“The protocol and issues around it are important and politicians like me and others have to find solutions and landing zones that are based on compromise and understanding each other’s perspectives, but also around a realistic and honest assessment of what Brexit means and the choices that flow from that.”

Mr Coveney added: “My job is to try to find solutions, to try to be optimistic about what’s possible and to try and work through issues with patience and with respect for everybody and their perspectives, so that we can try to find a basis for agreement moving forward and I think the European Union is also trying to bring that patience and understanding.”