You picked on the wrong city

The dignity and determination of Derry that will ensure the city will never forget, never stop remembering their fallen and will never stop its quest for justice for those who were killed by British soldiers on Bloody Sunday 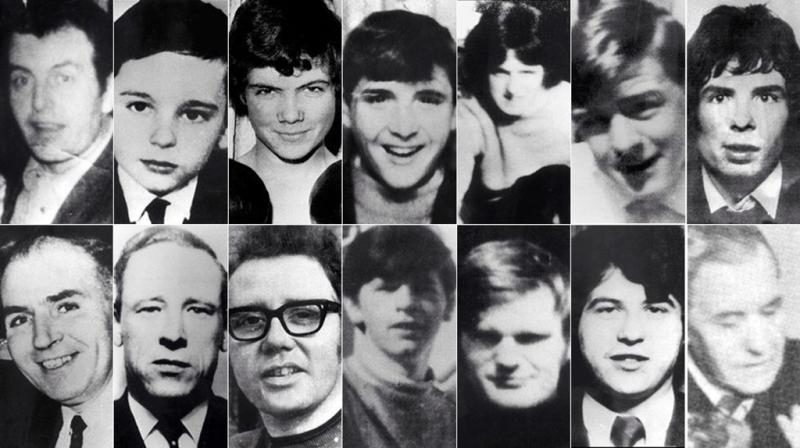 The 14 people who were shot and killed by British Parachute Regiment troops on January 30, 1972. A dark day for Derry that became known as Bloody Sunday.

“You picked on the wrong city”. The quote is not about Derry and Bloody Sunday but, given the determined effort show by the city's people to remember and ensure no one else forgets, it is one that could be applied to it.

The line in question came from the chairman of Everton Football Club, Bill Kenwright. He was speaking at a memorial held at Anfield – the home of his rival club Liverpool – for the Hillsborough victims when in 1989, 97 Liverpool supporters were unlawfully killed following a crush in one end of Hillsborough Stadium in Sheffield.

And like Derry, Liverpool has then seen justice cruelly denied.

But like Liverpool, Derry will not forget – nor will it give up. 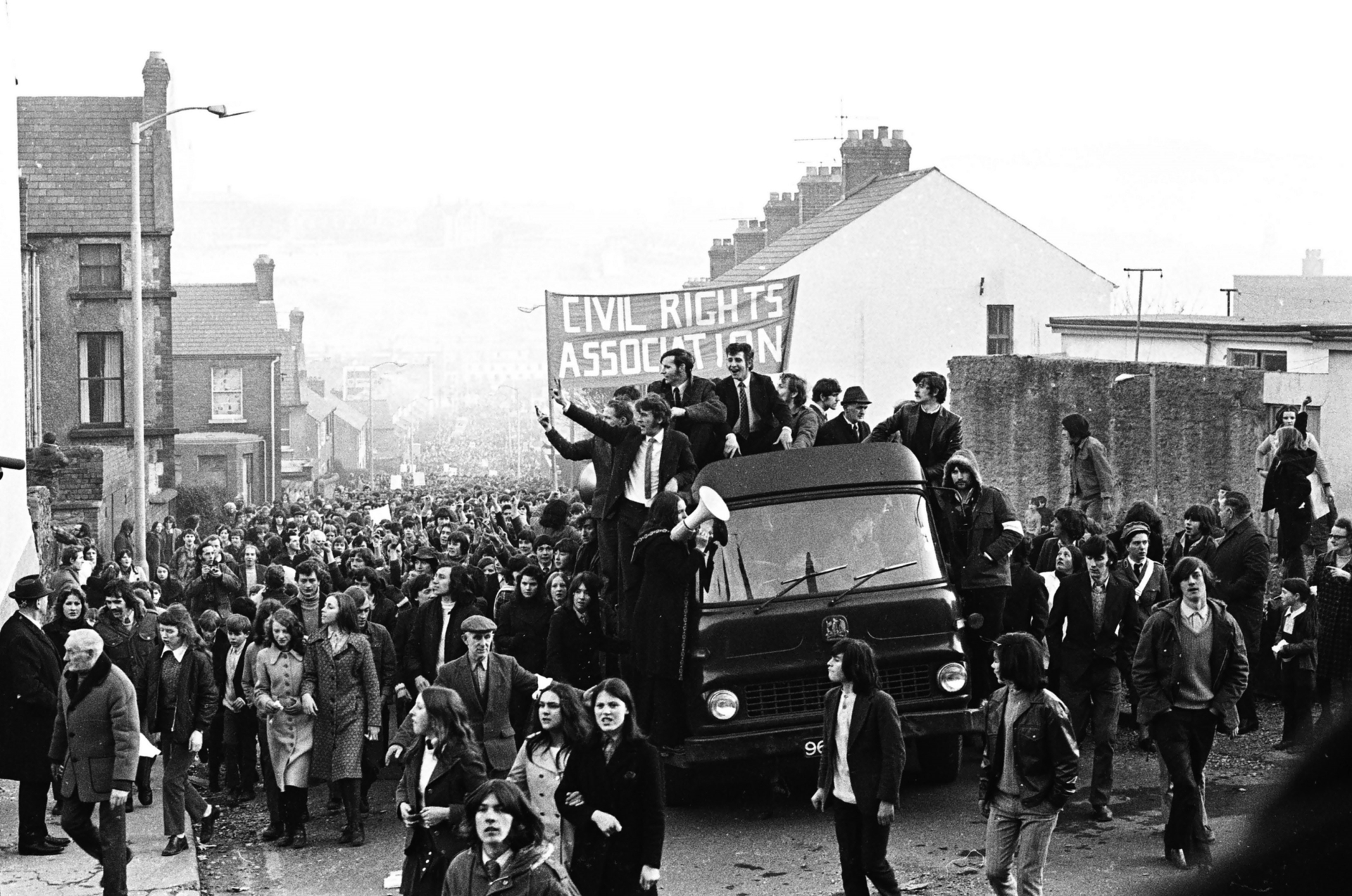 The Civil Rights march gets underway as those marching make their way to Free Derry Corner, not knowing what lay in wait for them. Pic: Robert White courtesy of the Museum of Free Derry

Because history forgotten will mean those who pulled the triggers of those rifles on the afternoon of January 30, 1972 will have got away with it. It would mean their masters in Government – past, present and no doubt future – will get away with it.

And to forget will leave the door wide open for those in authority to sweep their atrocities, their misdeeds and incompetency under the carpet – because they were allowed to get away with it the last time.

Justice may still come to the Bloody Sunday families, although the State looks like they'll succeed in delaying it until after those who were alive when their loved ones were mown down so callously are long gone.

By then, those 'on duty' for the Paratroopers that day who are still alive today will also be gone. As will those who gave them their orders.

Justice, if it does come, looks likely to be retrospective justice at that. But it would be justice nonetheless. 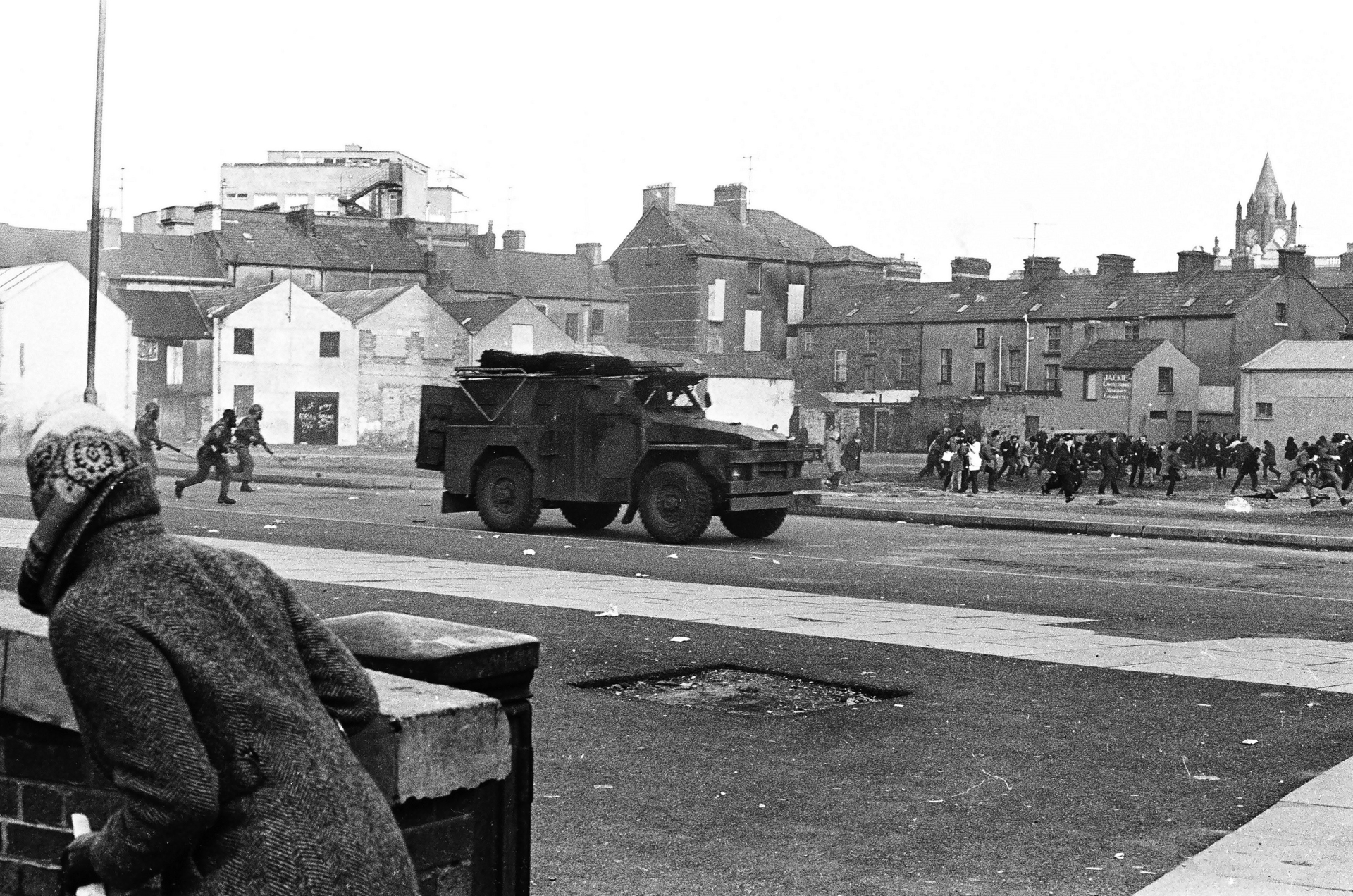 The success in British courts by Kenyans in 2013 show why Derry should never give up. The Kenyan delegation claimed for, and won, compensation from the British State for atrocities committed on their land by the British Army in the 1950s, who had done so in the name of 'combating terrorism' – an all-too familiar excuse to those closer to home.

Even after being embarrassed by the Courts for their atrocities in Kenya – a costs and compensation sum of £19.9million had been paid to 5000 Kenyans who had suffered back then – the then-Foreign Secretary, William Hague, still tried to weasel Britain out of responsibility for colonial brutality elsewhere.

While expressing 'regret' for the torture and ill-treatment suffered by the Kenyans at the hands of the British army, Hague indicated that others who had had British colonial brutality thrust upon them should not get ideas about claiming a similar victory when he said in Parliament: “We do not believe that this settlement establishes a precedent in relation to any other former British colonial administration.”

Derry knows the implication of that statement only too well. First they were dealt the blow that only Soldiers F and B would face prosecution for Bloody Sunday only for those cases to be dropped with 'related evidential features' being cited – a phrase that added further insult to injury. 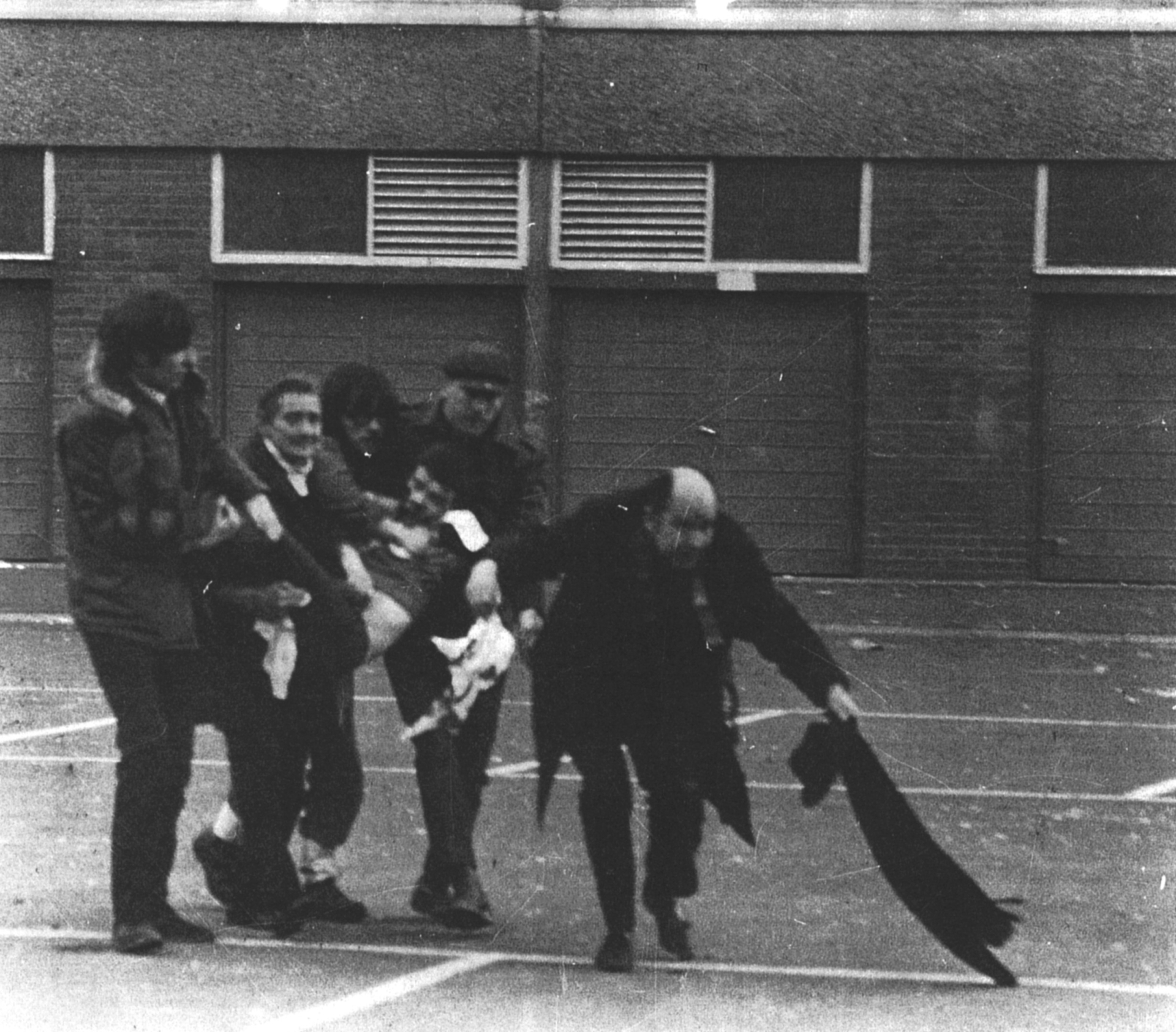 The image that shocked the world. Fr Edward Daly, later to be made a Bishop, waves a white handkerchief in a plea to British soldiers to stop firing bullets as he and others try to get Jackie Duddy, who had been shot, to safety. 17-year-old Jackie would die from his wounds. Daly would say of Duddy afterwards: "A young fella who was posing no threat to anybody being shot dead unjustifiably". Pic: Fulvio Grimaldi courtesy of the Museum of Free Derry.

Soldiers F and B have effectively got away with it. As have the others who were not charged while those soldiers who have since died still have their names in tact to everyone outside Derry and Ireland.

The army top brass who gave the orders and orchestrated the cover-up have got away with it.

Banty Nash – whose brother Willie was killed on Bloody Sunday – said that knowing British history as he did, he was not surprised that no one has been tried and sentenced for what happened that day.

Others still retain hope that justice will come but one can see where Banty is coming from. After all, Britain has form for covering-up atrocities and tragedies caused by trigger-happy thugs and incompetent officials.

The Jallianwala Bagh Massacre of 1919 in British-ruled India is an example.

A public gathering in the Punjab city of Amritsar took place calling for Indians to have parity of civil rights with white British colonial residents as well as demands for India to be independent from Britain.

However, the British army responded by opening fire upon them. Accounts vary as to how many people were slaughtered – they range between 379 to 1500 – but even had the figure been one, it would have still been one killing too many.

Instead of being put in the dock and tried for the murder of those at Jallianwala Bagh, Brigadier Reginald Dyer was simply told to resign his post while The Morning Post newspaper – later to bought and absorbed by The Daily Telegraph – raised a benefit fund of £26,000 (Just over £1million in today's money) for him to live on during his retirement. 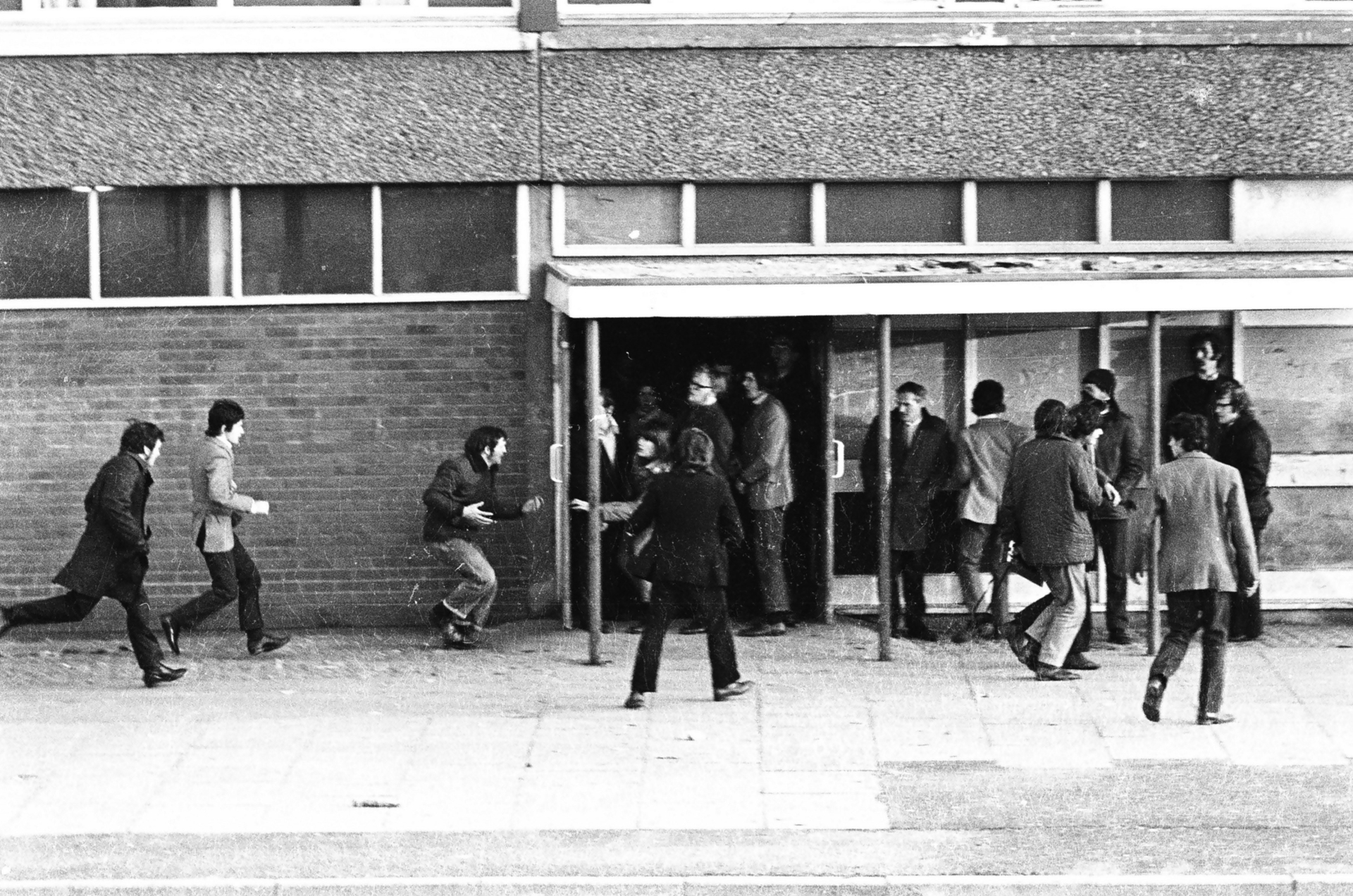 A crowd of people, fleeing from the British soldiers whose killing spree was well underway, rush to take cover inside one of the Rossville flats. Pic: Robert White courtesy of the Museum of Free Derry.

Atrocities in Britain's colonies had been swept under the carpet before and would continue to be brushed away long after Jallianwala Bagh – as Derry will know only too well.

Covering-up is something that has been ingrained into the British psyche. Its education system teaches children little of Ireland – despite England holding considerable influence over Ireland from 1172 onwards.

Children across the water are rarely taught why many had to leave Ireland because of an engineered famine by Britain that starved a million Irish people or why Ireland rebelled against Britain during the First World War one Easter in 1916 or why 14 Irish people in Derry were killed by British soldiers on Bloody Sunday.

One only had to look at the comments on social media fuelled with ignorance of Derry and Ireland the day Soldier F had his prosecution dropped to see what effect this non-education had on those who studied under the British education system.

Such flames of ignorance are fanned further when the likes of Tory MP Johnny Mercer claim that attempts to get British soldiers in court to stand trial for alleged crimes are 'vexatious'.

Mr Mercer is also fond of citing the old age of those army veterans who have been threatened with prosecution. But he will block anyone on Twitter if you ask him why he doesn't make a similar stand against Germany's legal system when they bring their own veterans to trial – the most recent being last autumn with a veteran of 100 years of age standing in the dock. 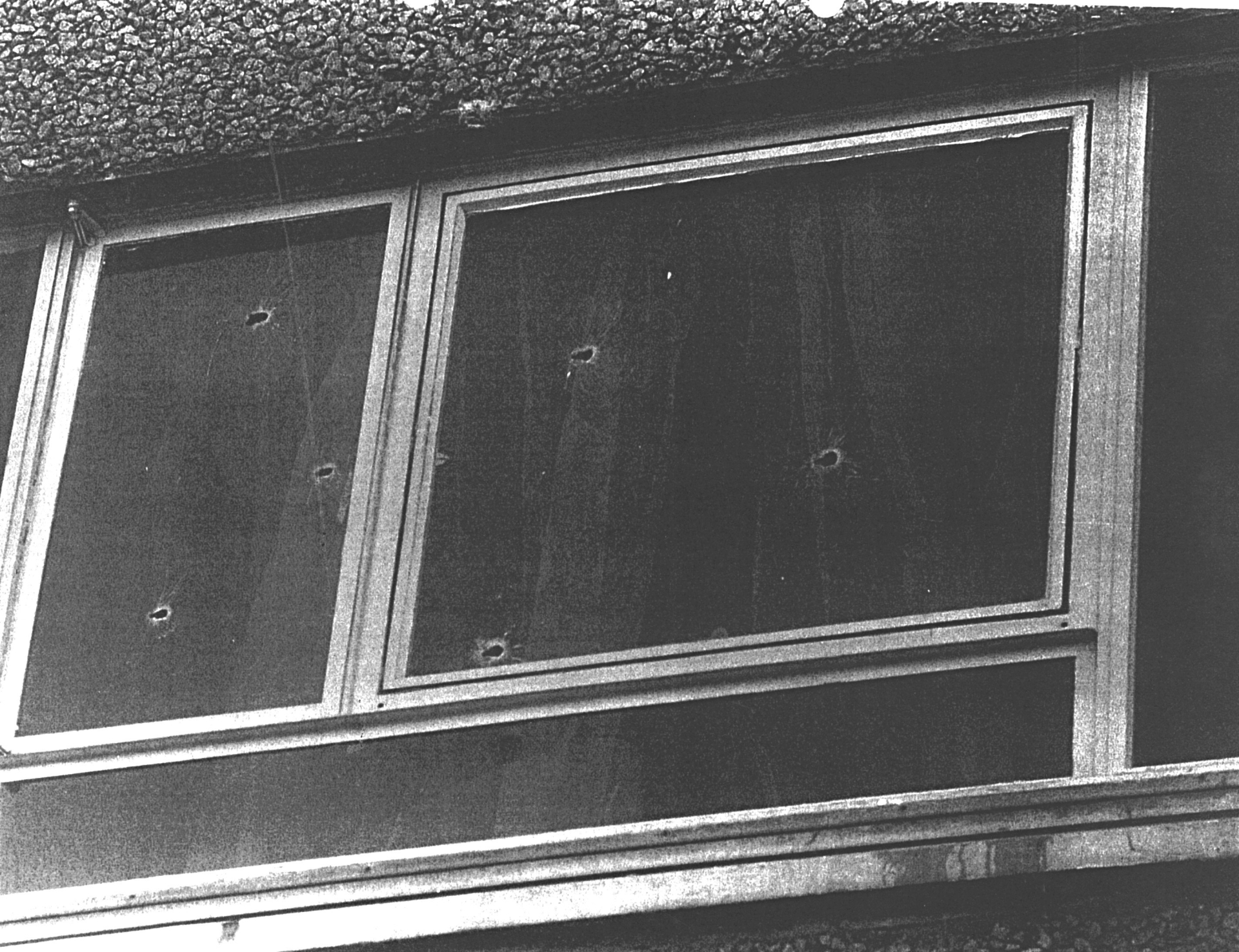 Bullet holes on the windows of one of the Rossville flats following the carnage wreaked up this tiny corner of Derry by the British Army's Parachute Regiment that would claim the lives of 14 innocent people. Pic: Fulvio Grimaldi courtesy of the Museum of Free Derry.

All of this, of course, is designed to deflate and dent the moral and strength of those who seek justice – be it now or retrospectively.

The prolonged fight of the Kenyans against the mechanisms of the British State to seek recognition of Britain's colonial crimes in Kenya shows why Derry will not give up.

Justice has been denied to the families of the Liverpool fans killed at Hillsborough and even though all legal avenues look to have been closed, they are not giving up.

Derry will remember its fallen from Bloody Sunday this weekend. It will keep on remembering, it will never forget and Derry will not give up.

After all, they picked on the wrong city.