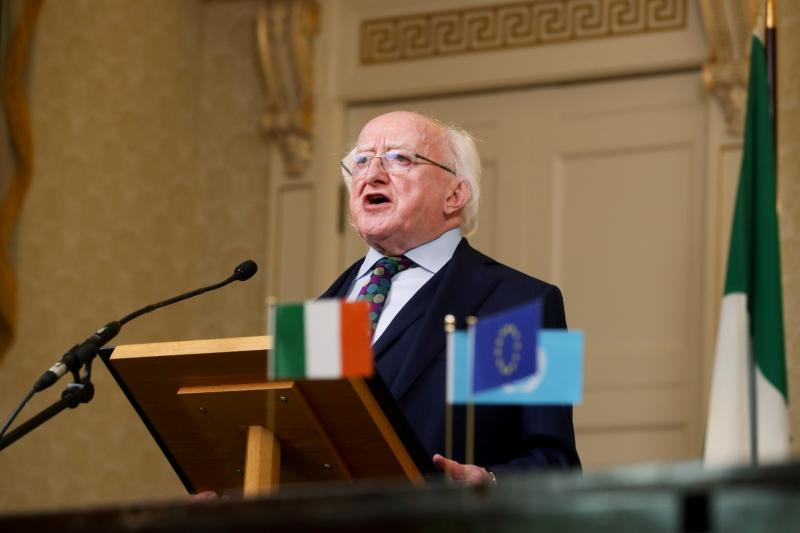 The President of Ireland, Michael D. Higgins is to deliver a specially recorded message to the Bloody Sunday families and the people of Derry to mark the 50th anniversary of Bloody Sunday.

The President’s message will be shown publicly for the first time during ‘Beyond the Silence’ – a poignant commemorative event – which will take place before a limited ‘in-person’ audience in Guildhall Square on Sunday, January 30.

The message will be broadcast on a large screen and the occasion will be livestreamed to an online audience.

‘Beyond the Silence’ is one of a number of events organised for this year’s anniversary by the Bloody Sunday Trust.

Beginning at 4pm sharp on the day of the anniversary, it will be hosted by actor, Adrian Dunbar, and will feature tributes to the victims, as well as music and public performances.

Guildhall Square will fall silent at the precise time when, on January 30, 1972, British paratroopers opened fire on civil rights marchers in the Bogside.

The attendance in the Square will be restricted, in accordance with public health guidance during the pandemic. People will be asked to assemble from 3.30pm. Five hundred places will be reserved for family members and one thousand will be available online on a ‘first come, first served’ basis.

The Trust is inviting members of the Bloody Sunday families to take part in a ‘Family Walk of Remembrance’ on the morning of the anniversary. It will set out from Creggan Shops at 9.15am and make its way to the Bloody Sunday Monument in Rossville Street for the annual Memorial Service and wreath-laying ceremony at 11.00am.

Members of the public are being asked to show their support for the families by lining the route in a responsible, socially distanced way.

The Trust has chosen ‘One World One Struggle’ as the theme for its 50th anniversary commemorative programme.

Other highlights include the delivery of the prestigious Bloody Sunday Memorial Lecture by the former British Labour Party leader, Jeremy Corbyn. The Islington North MP has been a long-standing supporter of Bloody Sunday justice issues, including the campaign for a new inquiry to overturn the discredited Widgery Tribunal findings and the call for British soldiers to be made accountable for Troubles-related incidents.

All events in this year’s programme are risk-assessed to ensure they comply with public health regulations and guidance. The full programme can be seen at https://bloodysunday50.com