No championship gold for Spartans in Coleraine 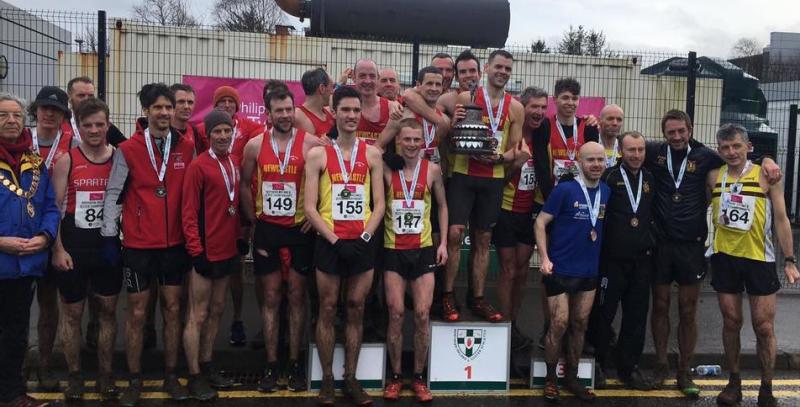 The City of Derry Spartan mens' team finished behind Newcastle AC in the men's event.

Despite the awful weather, a massive turnout at the University grounds on Saturday for the NI & Ulster senior Cross Country championships saw the City of Derry Spartans flying the local flag in both the male and female races.
Catherine Whoriskey impressed with a big effort for the runners up spot in the ladies 6K and lead the red vests to a well deserved team bronze medal finish.
Over a 3 lap windblown and testing course she showed no ill effects from her below par Barcelona Half Marathon six days earlier and came through strongly in the latter stages to take the individual championship silver medal behind Emma Mitchell, the NI 10K record holder, running in the Clonliffe Harriers colours.
There were battling, gusty runs from Jackie McMonagle, Angeline McShane and Amy Jackson who crossed the line in 22nd, 23rd and 24th in a quality field with 191 finishers ensured the team bronze finish. 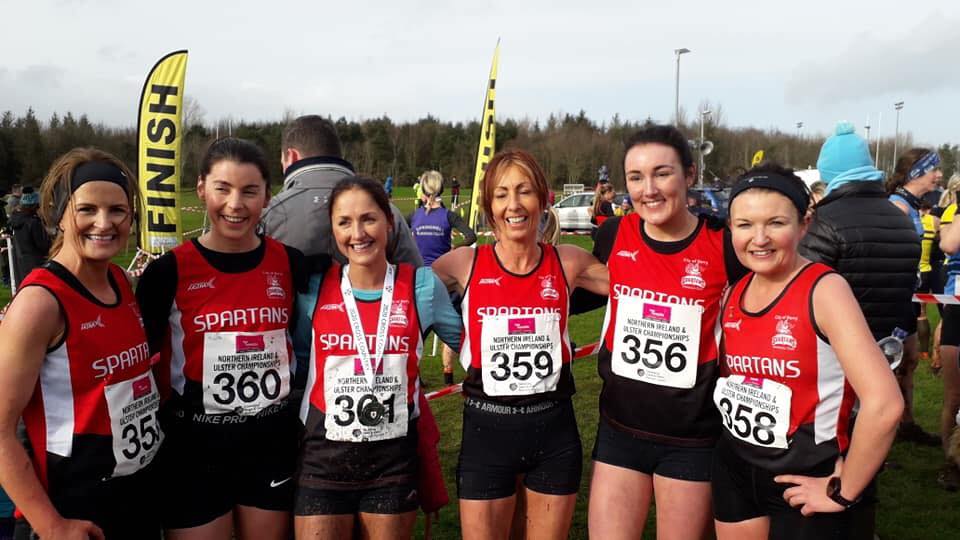 This replicated last year's finish position with North Down and Beechmount Harriers once again the top two clubs. In truth both of them were vunerable this year and had the Spartans defending individual champion Breege Connolly been available, a golden glow beckoned for the Derry women. Unfortunately it was not to be so back to the drawing board for the local ladies.
The male Spartans went into their 12K race as defending champions and chasing four wins in a row but also with a rash of injuries and unavailability. The weather had worsened, sleety rain now adding to the degree of difficulty out on the course as the start gun went.
The die was cast early on with a strong Newcastle AC squad packing impressively up front. Declan Reed and Allan Bogle were the red vests spearhead, North Belfast's defending champion Mark McKinstry was cutting out the pace with Eskander Turki of Annadale Striders and host club Springwell's Neil Johnston also in there with lead Newcastle men Patrick McNiff , Zach Hanna and Seamus Lynch.
By midway Johnston was in front, chased by Turki with McKinstry battling to retain contact. Newcastle had their scoring six in compact fashion while the Spartans had John Lenehan and Steven McAlary trying hard to get closer to Reed and Bogle as Kyle Doherty struggled to get going. The race commenter was saying there were only a few points between Newcastle and the Spartans but in truth it was significantly more.

Brilliant
Johnston swept on to post a brilliant home town win and his first senior XC championship gold, Turki impressed for the silver, McKinstry hung on for bronze and McNiff in 4th was the lead Newcastle man home. Declan Redd was pipped for 5th by East Down's Aaron McGrady but was in front of Newcasle's Hanna with Bogle impressive in 8th. Kyle Doherty one of the red vests walking wounded had limped out and despite brave runs from another two walking wounded Spartans John Lenehan 14th and Steven McAlary15th the team title went to Newcastle by a 25 point margin and NBH third a further 60 points adrift.. The Spartans squad completed by Noel Logan 27th and grabbing his first ever senior championship medal, Paddy O Donnell, in 31st of the 214 recorded finishers
A testing day for runners, officials and spectators, this was cross country at its rawest edge but the competition was red hot and gripping throughout. Well done to everyone who participated in a memorable afternoon's sport.